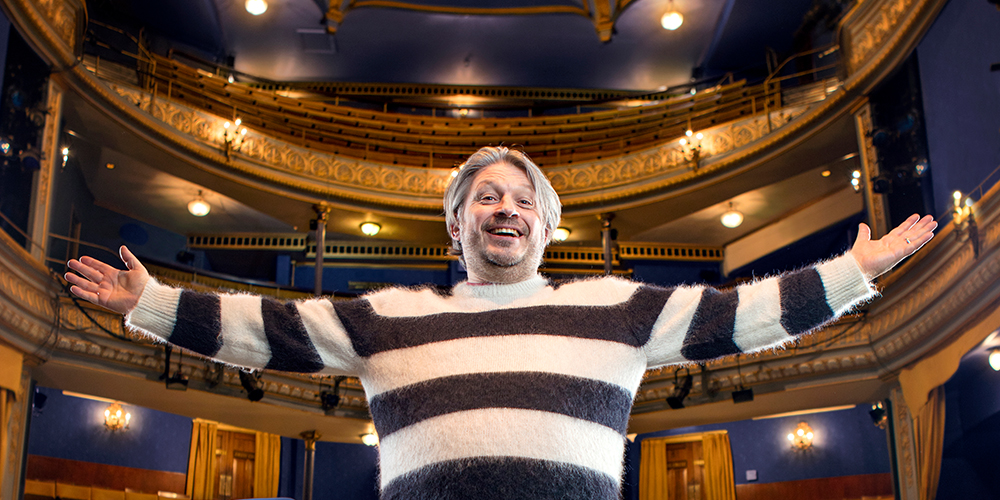 not-so-quietly becoming the best celebrity interviewer in the land… very funny… what sets RHLSTP apart from the likes of Graham Norton or Jonathan Ross is the luxury of interviewing just one guest for an hour or more. That time is something you simply don’t get on modern chatshows so, as entertaining as they can be, the conversation rarely touches on anything deeper than whether the guest gets recognised in Tesco
Edward Tew, The Guardian

a podcasting veteran… the chat is always worth it… fab
Miranda Sawyer, The Observer

Richard Herring’s interview podcast, known to the cool kids as RHLSTP (as any regular listener will know), is usually recorded in London’s glittering West End at the Leicester Square Theatre, but now it’s going on the road. Join the “Podfather” (Guardian), “King of the Internet” (Time Out) and “The UK’s online comedy pioneer” (The Times) as he chats with hilarious star guests in a theatre near you. Previous guests include Stephen Fry, Dawn French, Sarah Millican, Steve Coogan and Bob Mortimer.  You can listen to all the 200+ previous episodes on Acast and iTunes. But it’s much more fun to see it live and hear all the bits that are too libellous and controversial to podcast.

For all dates, visit: www.rhlstp.co.uk

What the press have said about RHLSTP:

Jonathan Ross has a funny voice. And yes, Parky has a wise, crinkly face. But, for us, Richard Herring’s comedian on comedian chat action takes the crown… It’s made us laugh more than anything else on the internet
Ben Williams, Time Out

It’s well worth being part of the audience for the recording of Richard Herring’s stellar, Chortle Award winning podcast
Warren Howard, The i Newspaper

packed with energy, insight and beautiful splodges of puerility
Alex Hardy, The Times