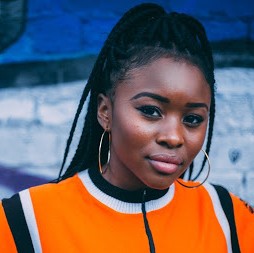 Tinea Taylor can be heard on Kiss FM UK Saturdays 6am – 9am and weekdays on KissFresh 3pm – 7pm. In 2016 she joined the MTV family, where she used to host the digital news weekly on Wednesdays before going on to present shows such as MTV’s Pop Royalty King & Queen, MTV’s Greatest Video of the Century and #Winning 2017.

Tinea landed her first presenting job in January 2011, presenting for online pop culture magazine, DropoutUK.  Although it was her first role as a presenter, she proved to be a natural as she interviewed artists such as Professor Green, Example, The Saturdays, Chase and Status, Tinie Tempah and Iggy Azalea to name a few.

Tinea has a huge amount of live presenting experience, having covered a number of festivals such as Wireless, V Festival and Sundown Festival where she hosted the main stage. She has roamed backstage at the MOBO Awards for a number of years as well as the MTV EMAs and has been asked to speak at several events including Go Think Big’s sessions and GRL PWR GANG’s all-female workshops, where she shared knowledge on how to get into presenting and her own journey.

As a very successful voiceover artist, Tinea’s voice is regularly heard on the weekly MTV official chart and MTV Movies show.  She previously voiced her own show on Nickelodeon called Nick@Nite.

Beyond this, Tinea voices numerous other TV and radio campaigns for Spotify, Channel 5, iTunes and MTV, as well as frequently DJ’ing at Ocean Beach Ibiza and playing popular spots; Plaza Beach and Aqua Mist in Marbella and BH Mallorca in Magaluf.

You can view Tinea’s showreel here: