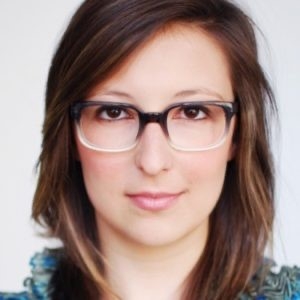 Natasha Vaynblat is a New York-based actor, writer, stand up and improviser. She is currently a staff writer for NBC’s A Little Late with Lilly Singh. Previously, she was a writer/performer and Senior Creative Consultant for Comedy Central’s Creators Lab. She’s written for MTV’s Guy Code vs Girl Code and was a co-creator of the IFC web series “Laurie” and “Red Autumn” and the star of Above Average’s “Katie, A Lady.” She is an alumna of NBC’s Late Night Writers Workshop and WGA East’s Made in NY Fellowship. Natasha has performed her solo shows The United Federation of Teachers and Self Help Yourself, Help! at UCB NY and LA. And her instagram @natashawearsclothes has been featured on Bust, PureWow, and Brooklyn Magazine.