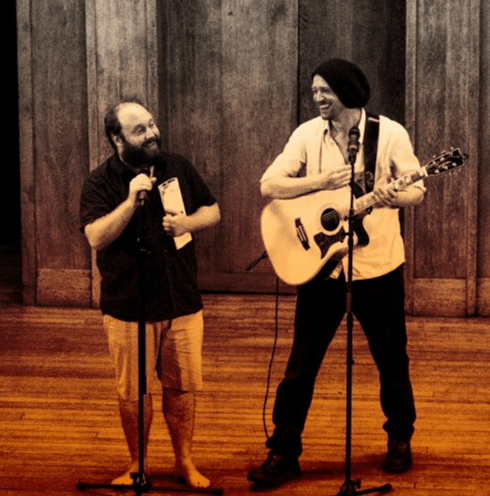 Musical satirists Jonny & the Baptists – real names Jonny Donahoe & Paddy Gervers – are among the hottest musical comedy acts on the UK scene, regularly appearing on TV, radio, at festivals and comedy clubs around the country on their UK tours. From silly songs to satirical anthems, their riotous live blend of comedy and rock gig has won adoring fans across the country.

Jonny & the Baptists have regularly appeared on BBC Radio 4 including The Now Show, The Infinite Monkey Cage, and Sketchorama (BBC Radio 4); and recently appeared on Live at Television Centre (BBC). They have topped the iTunes comedy chart with single Farage, supported Mark Thomas on tour and appeared at major festivals from Latitude and Kaleidoscope to Tolpuddle Martyrs and Greenbelt.

Their UK tours Stop UKIP, Rock The Vote and The End Is Nigh, Eat The Poor and Love You Hate Bastards, have played to packed theatres, arts centres and comedy venues up and down the country. Their most recent show saw them receive rave reviews at the Edinburgh festival and a Chortle Comedy Award Nomination for Best Music and Variety Act.