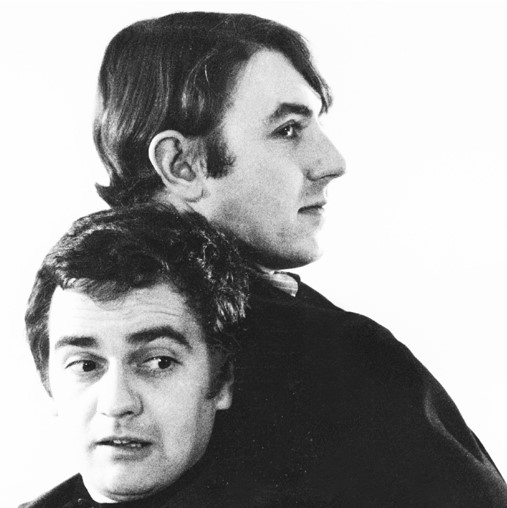 The Works of Peter Cook and Dudley Moore

Peter Cook & Dudley Moore were a major force in establishing a completely new comedy era and have remained an ongoing influence on future comedy generations.

Peter Cook & Dudley Moore – along with Jonathan Miller & Alan Bennett – wrote and starred in the satirical revue Beyond the Fringe, which debuted at the Edinburgh Festival and received rave reviews in London’s West End and on Broadway.  The immensely popular and influential Peter opened the Establishment Club in Soho and became owner of the satirical magazine, Private Eye.

The comedy duo recorded three series and a Christmas Special of Not Only…But Also for the BBC, introducing the hilarious cloth-capped duo Pete and Dud.  ITV commissioned three specials of Goodbye Again and together they wrote and appeared in the comedy feature films The Wrong Box and Bedazzled.

Dudley’s film credits include 10 with Bo Derek, Arthur with Liza Minnelli (for which he was nominated for an Oscar for Best Actor) and the sequel Arthur 2: On the Rocks as well as Crazy People and Blame It On the Bellboy.

Peter appeared in popular programmes Blackadder, The Comic Strips – Mr Jolly Lives Next Door, Not the Nine O’Clock News, Revolver, Have I Got News for You?, Why Bother and A Life in Pieces.

After successful separate careers they reunited for a US Comic Relief concert and later in The Secret Policeman’s Biggest Ball for Amnesty International.  They released Derek & Clive followed by Derek & Clive Live (Island Records), Derek & Clive Come Again and Ad Nauseum (Virgin Records), the latter being accompanied by a film Derek & Clive Get the Horn released by Polygram.