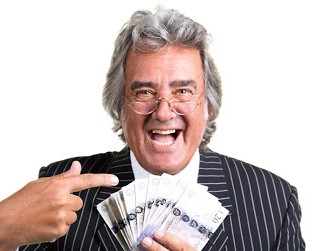 David Dickinson first came into the public eye when presenting Bargain Hunt for BBC1. His unique style, screen persona and irrepressible enthusiasm have all combined to make him a beloved national treasure. His ITV series, Dickinson’s Real Deal continually outperforms any other programme in the same slot and is now in its 12th series.

Since presenting Bargain Hunt, David has also been seen on numerous other shows including Best British Sitcoms, which saw David championing Only Fools and Horses and which took up first position in a public vote, Ant and Dec’s Saturday Night Takeaway (ITV1), The Chase (ITV1), Big Star’s Little Star (ITV1), Celebrity Juice (ITV2), All Star Mr & Mrs (ITV), All Star Family Fortunes (ITV), Celebrity Swap for Channel 5, The Impressionable Jon Culshaw (ITV), Holiday (BBC1), Night of a Thousand Faces (BBC1), On the Couch with Ruby Wax and Shooting Stars (BBC2). He appeared in the first series of Strictly Come Dancing on BBC1 and the fifth series of I’m a Celebrity Get Me Out of Here for ITV.

David is the author of two books, The Antiques Buyer and Dickinson’s Bargain Hunters Handbook, and he has released a DVD entitled David Dickinson Cheap as Chips. He has also written a weekly column in the magazine Real People and has published a best-selling autobiography, The Duke.