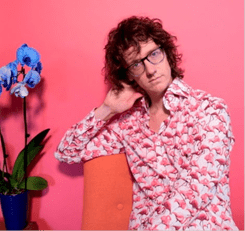 Best known for his portrayal of suburban alpha mom Gayle Waters-Waters in his hit web series GAYLE, Chris Fleming is a comedian who has appeared on Comedy Central’s Tosh.0 and Corporate, ABC’s Splitting Up Together, Netflix’s animated series Twelve Forever and the film Last Laugh. Chris has been written about in Forbes, LA Weekly, Huffington Post, Cosmopolitan, and the New Yorker, was featured in HBO’s Vice News Tonight, and in 2019 was named one of Variety’s “Comics To Watch”. Chris’s 2017 touring show “Showpig” was streamed from Chicago over Facebook Live in December of that year. His live tours since have taken him throughout the US, Canada, UK and Australia. Chris currently has over 60 million views on his YouTube channel and over 85 million video views on Facebook. Chris reaches over a 600 thousand subscribers between Facebook and YouTube.