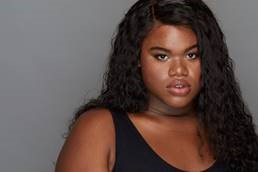 Jari Jones is a Black Trans Actress, Model, Creative & Activist. Jari has contributed to many publications such as Nylon, New York Times, Allure and Out Magazine, creating conversation around the positive representation and the uplifting of Trans & Queer People of color, as well as evolving the visual conversation around beauty and body standards within fashion and media. This is Jari’s beautiful return to the Delacorte Theater, as she graced this very stage in Elizabeth Swados” The Runaways”. Jari has been featured in Netflix’s Tales of the City, Ryan Murphy’s Pose and awaits her Amazon Debut in Transparent: The Musical Finale. Recently Jari Jones has made BLACK TRANS EXCELLENCE History by being named the First Black Trans Producer to have a film premiere and compete at the prestigious Cannes Film Festival, which is called PORT AUTHORITY.