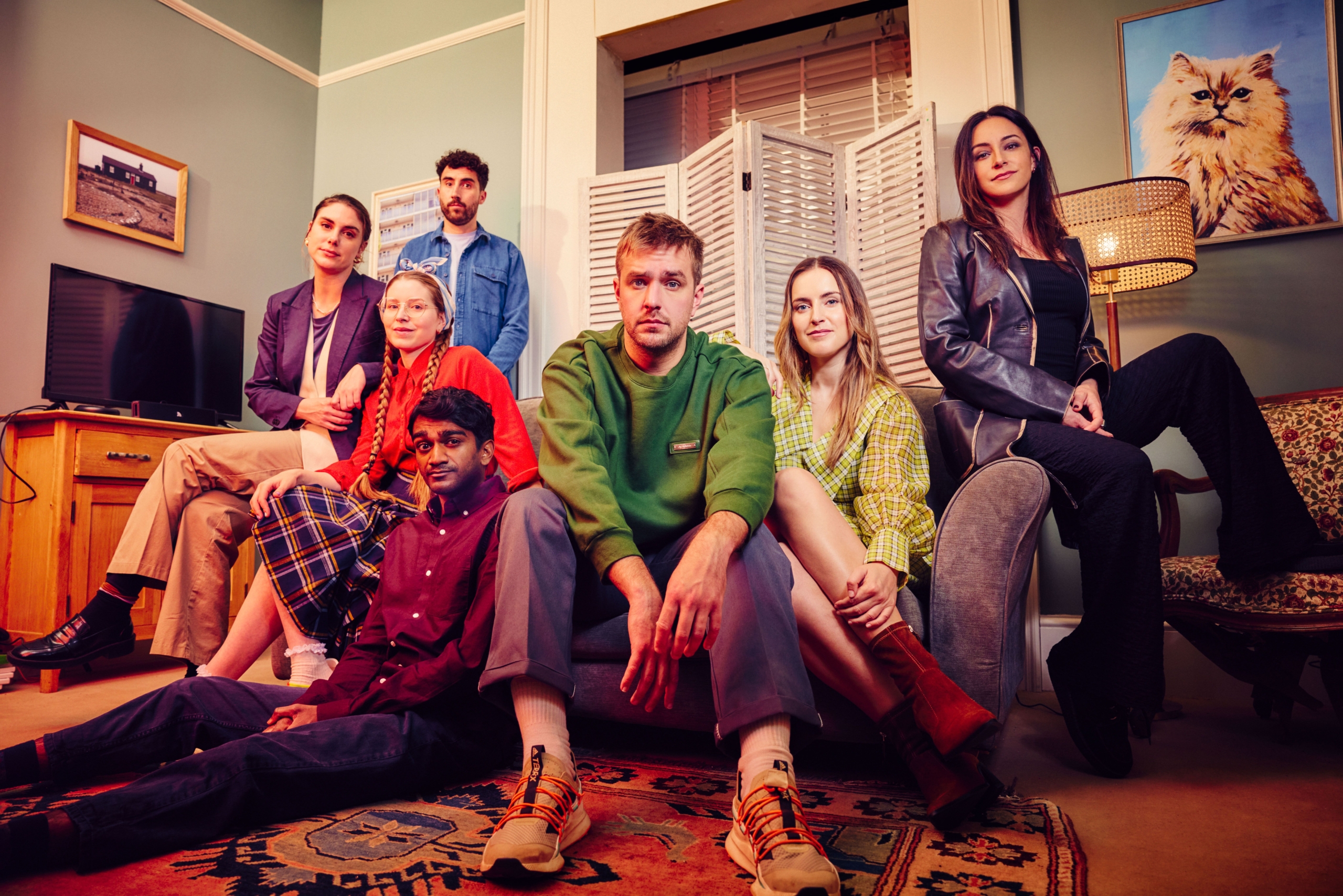 “a level of expertise that clearly shows… tear-jerking and heart-warming.”
The Times

“pacey feel of an American sitcom…the plot is more ambitious than you might expect for ITV2…Bugeja was big on structure, Stirling wanted to get as many jokes in as possible. Judging by the first episode they have reached a successful compromise”
The Evening Standard

Set to air on ITV2 and ITVX later this month, Buffering follows the lives of kids’ TV presenter Iain (Iain Stirling) and his housemates: Ashley (Rosa Robson – Black Mountain Poets, Inside No. 9, Heavy Entertainment), Rosie (Jessie Cave – Harry Potter, Trollied, Black Mirror), Greg (Paul G Raymond – Plebs, Avenue 5, Starstruck), and Thalia (Janine Harouni – Stand Up with Janine Harouni (Please Remain Seated), The Batman, Modern Horror Stories) as they attempt to navigate the choppy waters of their late twenties, with every wrong decision, failed relationship and wasted hungover day intensifying the feeling that time is running out for them to get their ‘adult’ lives in order.

Over the course of this new series, we’ll follow Iain and his housemates as they try to figure out how to be better at life. Whether it’s throwing house parties, job hunting, dating, visiting the countryside, putting on pub quizzes or just figuring out their true feelings for each other, the gang will always have each other when, inevitably, things don’t go as planned. Helping them along the way is Iain’s on-off (mostly off) girlfriend Olivia (Elena Saurel – The Batman, Industry, Breeders) and his overly detail-driven (aka irritating) colleague Finn (Steve Bugeja).

Other Things The Press Said About Series 1

“It’s Iain, he’s hilarious, he’s got a new show out… the headline of your character is brilliant, I watched it, I howled, I fell off the bed… it’s very fast-moving… it reminds me of Modern Family”
Claudia Winkleman, BBC Radio 2

★★★★
Mark Wareham, The Mail on Sunday

“Having seen the whole series in one go, I loved it, it’s one that is definitely filthy, what I’m really impressed by, is Iain, with how you’ve obviously drawn to some extent your experience in children’s TV into this in terms of source material”
Scott Bryan, BBC Radio 5 Live

“I absolutely loved it…within a few days I had binge-watched the whole series and found myself frantically googling to find out if there would be another…it even manages to balance funny moments with emotional ones, which isn’t easy. I’d recommend giving it a go on ITV Hub”
Ed Gleave, Daily Star“

“[Iain] certainly has a more thoughtful side, too. It’s something that’s demonstrated his new sitcom Buffering…The show is packed full of funny moments…(a particular highlight being the desperate lengths Iain’s character will go to guest star on The Chase) but it doesn’t shy away from the more serious ones, either.”
Rowena Henley, Bustle

“Quick-paced and punchy, Buffering also contains a lot of heart and characters to instantly connect with…Buffering is one of a number of shows featuring young UK comedians to have emerged in recent years as the next generation of comedy storytellers are given the chance to shine”
Ross Crae, The Sunday Post

“Former kid’s TV host Iain Stirling, aka the voice of Love Island, has poured his comedic talent into this six-part sitcom that has a solid grounding in real life… one ridiculous situation to the next.”
Eleanor Relf, The Sun

“I watched the first episode this morning and was giggling away in the back of a taxi on the way to work, I really enjoyed it”
Matt Edmondson, BBC Radio 1

“ITV2 have had a tricky relationship with sitcoms in the past, Plebs undeniably their best, until Buffering, a smart, funny and warm sitcom”
Elliot Gonzalez, I Talk Telly

“Beyond heartbreak, sex and navigating your career in your early twenties, the show takes on a huge feat of tackling miscarriage.”
Nana Baah, Vice

“Prepare to LOL”
The Sun

“A love letter to that very generation”
Emily Baker, The i

“It’s not what you expect from an ITV2 sitcom and is handled pretty sensitively, showing that Buffering can be daft but deft too.”
Bruce Dessau Beyond The Joke/ Evening Standard

Other landmark Avalon shows include BAFTA winning and multi Emmy-nominated Catastrophe (Amazon Prime Video/Channel 4), multi BAFTA-winning TV Burp (ITV), and Workaholics (Comedy Central USA). Avalon also distributes its catalogue of programmes to over 150 countries worldwide. Avalon has produced many globally successful podcasts and is regularly at the top of the UK iTunes chart with the multi-award-winning Shagged. Married. Annoyed by Chris and Rosie Ramsey.