Matt Lucas, Elis James & Andrew Mensah are back with Fantasy Football League as the series returns to Sky Max & NOW on Friday 27 January 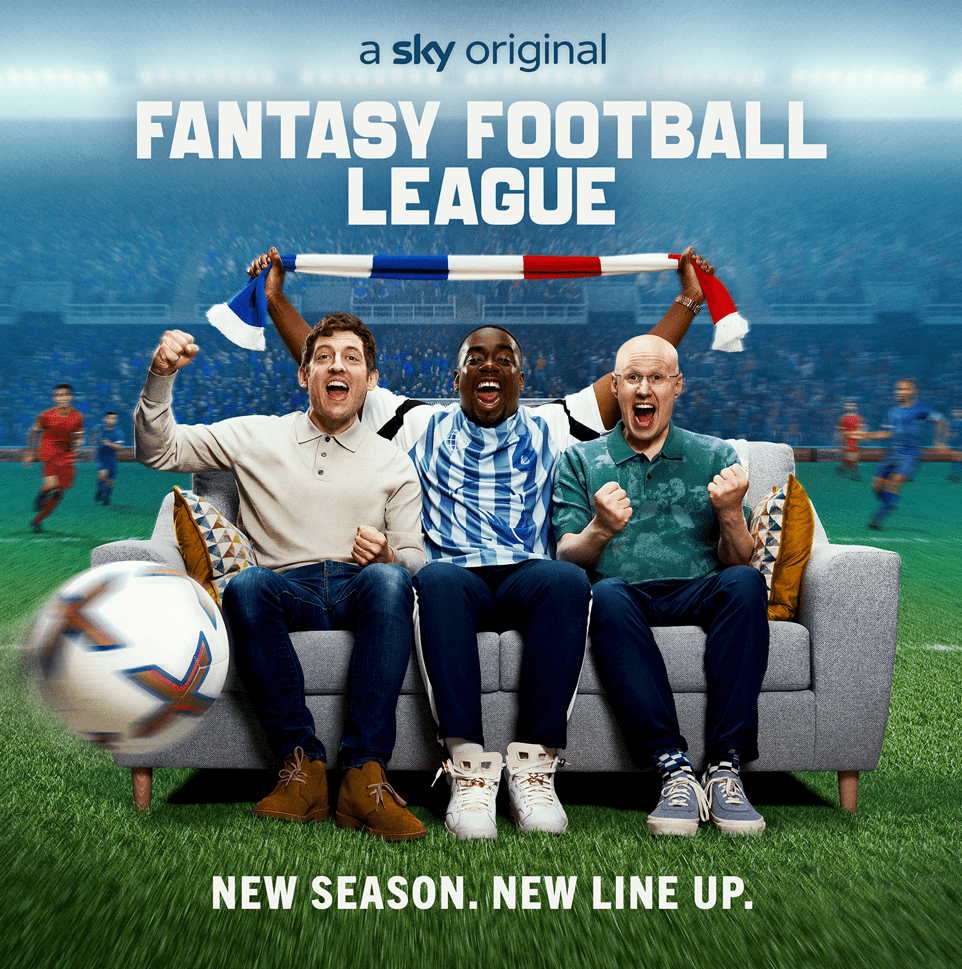 “Like a phoenix from the flames… Fantasy Football League staged a triumphant comeback… Just nostalgic enough. Just new enough. Many happy returns… freewheeling, irrelevant comedy… Mensah made for a lively addition, cracking edgy gags… Softly spoken, dry-witted James especially was a revelation… This misty-eyed revival was much more successful, getting its season off to a highly promising start. Football’s coming home. So is Fantasy Football League.” ★★★★
Michael Hogan, The Daily Telegraph

“SOFA SO GOOD. Fans of the original will be relieved to know the show still works… the features and sketches which make FFL a cult hit with football fans… Matt and Elis’ comedy acting really comes to the fore in the sketches… classy nod to the original… hopefully the new FFL will last more than a season.”
Stuart Pink, The Sun

With the Premier League returning to screens following the World Cup, Sky has today confirmed that hosts Matt Lucas and Elis James, along with fellow football fanatic and comedian Andrew Mensah overseeing the celebrity league, will be bringing fans eight more episodes of the iconic comedy series Fantasy Football League, airing on Sky Max and NOW from Friday 27 January.

Fantasy Football League will again delight fans old and new as it honours the format of the cult original series, with Matt and Elis combing over the week’s football news for hilarious clips and anecdotes, as well as the return of the much-loved Phoenix From The Flames segment – where a famous moment from footballing history will be recreated with some very well-known faces…

In the autumn 2022 run, as well as the stellar array of celebrity guest managers, fantastic footballing faces such as David James, Kelly Smith, Lee Dixon, Darren Bent, Fara Williams and more joined the duo in recreating famous (and infamous) moments from the beautiful game in Phoenix From The Flames. Swansea city legend and Elis’ hero Lee Trundle treated fans to top-of-the-table performances of singalong anthems at the end of each show, while Matt & Elis hilariously portrayed footy stars such as Erling Haaland, Gareth Southgate and Jurgen Klopp in a number of topical, side-splitting sketches. Expect plenty more as the whistle sounds for the second half of play…

To join in and compete with the celebrity guest managers each week, sign up to the league using code HFYXTQ via the official Fantasy Premier League app – find more information on the website.

You can catch up on previous episodes on Sky Media Village.

For further information, please contact: Jack Collins at Premier Comms on Jack.collins@premiercomms.com / Sarah Gutierrez on sarah.gutierrez@sky.uk / Molly Wyatt at molly.wyatt@sky.uk / Dan Lloyd at Avalon on DLloyd@avalonuk.com or Tara Dein at Avalon on Tdein@avalonuk.com