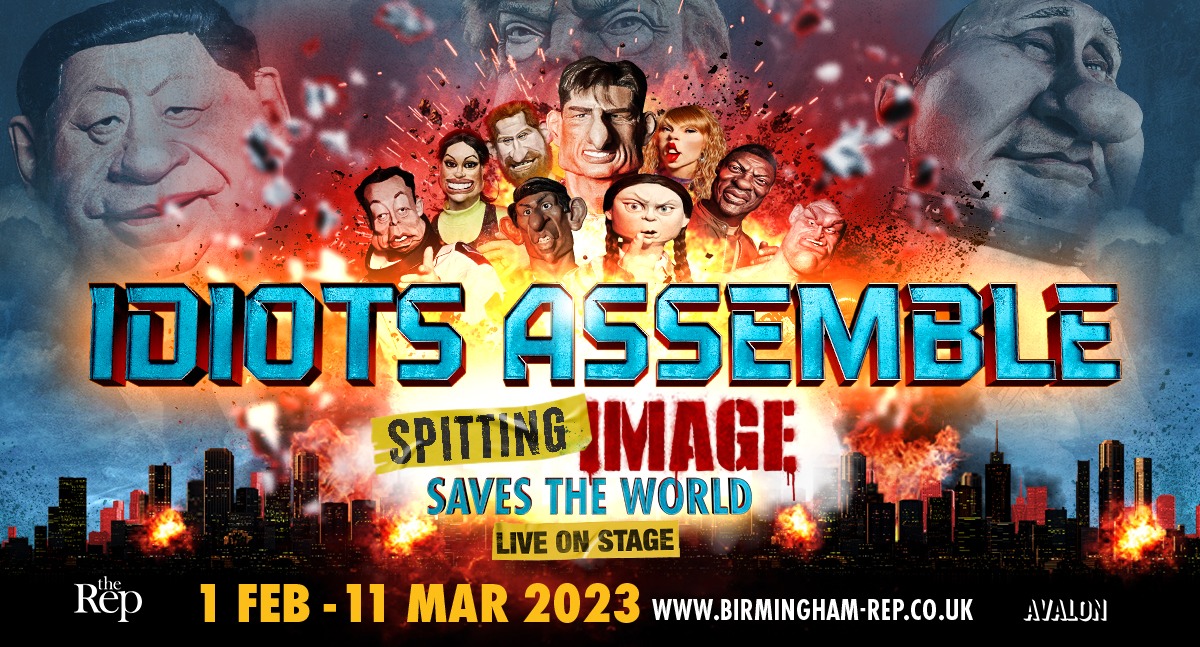 New photos of the extraordinary cast (including King Charles, Adele and Rishi Sunak) and footage of the creative team talking about the show have been released today and can be downloaded here.

World famous celebrities will be thrown together as Tom Cruise is tasked by King Charles with saving Great Britain. Greta Thunberg duets with Stormzy as Putin and Xi watch on from their premium seats in the stalls. Have they just come out for a night on the town? Or will they wipe out all of civilisation?  A show simultaneously inspired and appalled by real events.

Sean Foley said:   ‘Trying to develop a satirical comedy based on the shifting politics of today has been the original fool’s errand: we’ve already thrown away 3 entire scripts – and several famous puppets aren’t even going to make their stage debuts anymore… But the sheer joy of casting Tom Cruise alongside King Charles, Greta Thunberg, RuPaul and Meghan Markle has made up for it. To be premiering this theatrical extravaganza in Birmingham, the home of the original ground-breaking television series, is a wonderful thrill.’

‘It’s a who’s who of the good, the bad and the ugly’ commented Al Murray. ‘I know Marvel like to say it,  but our show is the greatest cross over event of all time.  Where else could you get Michael Gove, Tom Cruise, Sir Ian McKellen, Idris Elba, Daniel Craig, Fiona Bruce and Paddington Bear on a single stage?’

Matt Forde added: ‘We are living through an insane, abnormal, infuriating period, so the timing of this show couldn’t be better. It’s vital that we see our leaders lampooned with cutting satire and yes, whacked over the head with a big stick.’

The BAFTA and Emmy award-winning satirical Spitting Image television series originally ran for 18 series between 1984 and 1996, and was watched by over 15 million viewers. It recently made a popular return to TV on BritBox, where across official social media channels, Spitting Image content has been hugely popular with over 200 million views globally, three number 1 trending videos on YouTube and achieved critical praise across the political divide.  Three one-off specials for ITV have also seen huge success on terrestrial television: with a 4.4 million audience achieving ITV’s highest Saturday night ratings at that time in four years.

For further information and interview requests please contact Nada Zakula at Story House PR on nada.zakula@storyhousepr.co.uk or 07831 766086 or Dan Lloyd at Avalon on dlloyd@avalonuk.com

For over 20 years Al has filled arenas and the largest theatres around the world as The Pub Landlord, and won numerous awards and accolades, including the Edinburgh Comedy Award (formally Perrier Award, after a record four successive nominations) and secured Olivier Award nominations for both of his sell-out West End runs.  He has hosted countless TV series, including the acclaimed entertainment chat show Al Murray’s Happy Hour (ITV) and the ground-breaking sitcom Time Gentlemen Please (Sky).  Al has made multiple appearances on The Royal Variety Performance (ITV) and hosted Live at the Apollo (BBC) and Live at the Palladium (ITV).

Matt Forde is one of the country’s most in-demand satirists.

After 70 sold out Political Party podcast live shows at Westminster’s The Other Palace, Matt moved to the West End’s Duchess Theatre in 2021 for a twice extended fortnightly residency continuing in to 2023. He has brought Parliament to life with his stand-up and debate with some of politics’ most powerful figures including Keir Starmer, Nicola Sturgeon, Tony Blair, Jacob Rees-Mogg, Angela Rayner, Michael Heseltine, Anthony Scaramucci, Alastair Campbell, Gordon Brown and Gary Neville. The UK’s leading political podcast has amassed over 7 million downloads, received numerous nominations from award bodies including the British Podcast Awards and Chortle Awards and is regularly highlighted as a top podcast pick in the press.

Matt is also the co-host of the 2022 British Podcast Award winning British Scandal with Alice Levine, telling the stories of the murkier side of the British elite, from Phone Hacking to Saville to Profumo.

His first book Politically Homeless was listed by The Sunday Times as one the Best Political Books of 2020.

Also described as “our foremost satirical stand-up” by The Sunday Times, Matt regularly plays sold-out critically acclaimed nationwide tours, including his recently wrapped Clowns To The Left of Me, Jokers To The Right.

Sean Foley is an actor, writer and director. A  double Olivier Award winner and Tony nominee, his work – as lead creative on 14 West End shows: as co-writer/star; writer/director; adaptor/director; and director – has also been Olivier nominated multiple times. He has – uniquely – been personally nominated in the acting, writing and directing categories.

Further directing work includes: The Man In The White Suit, (as writer/director, Wyndhams), starring Stephen Mangan; The Dresser, (Duke of York’s); his RSC debut, adapting and directing Thomas Middleton’s A Mad World My Masters, (Swan Theatre, Stratford, and Barbican); Harry Hill and Steve Brown’s, I Can’t Sing! at The London Palladium, starring Cynthia Erivo; Present Laughter, The Critic, and The Real Inspector Hound, (Chichester Festival Theatre); Joe Orton’s What The Butler Saw, (Vaudeville); Ben Hur, (Watermill); Pinter’s People, (Theatre Royal, Haymarket); as writer only, his adaptation of Eugene Ionesco’s Amedee, or How To Get Rid Of It, debuted at Birmingham Rep.

As co-artistic director of the right size, he created, co-wrote and starred in ten original stage comedies 1990 to 2000. The company played in over 25 countries around the world, winning many international awards.

Sean is the Artistic Director of Birmingham Repertory Theatre.

Other landmark Avalon shows include BAFTA winning and multi  Emmy nominated Catastrophe (Amazon Prime Video/Channel 4), multi BAFTA-winning TV Burp (ITV), and Workaholics (Comedy Central USA). Avalon also distributes its catalogue of programmes to over 150 countries worldwide. Avalon has produced many globally successful podcasts and is regularly at the top of the UK iTunes chart with the multi-award-winning Shagged. Married. Annoyed by Chris and Rosie Ramsey.

Birmingham Rep is the oldest building-based theatre company in the UK, and the forerunner of both the RSC and the National Theatre. The Rep has an unparalleled pioneering history and is the only producing theatre in the UK’s Second City. It has been at the forefront of theatre in the UK for over 100 years.

The Rep’s mission is to create artistically ambitious popular theatre – world class, for everyone. The commissioning and production of new work lies at the core of The Rep’s programme and over the last 15 years, with the company has produced more than 130 new plays.

As well as presenting over 60 productions on its three stages every year, the theatre tours its productions nationally and internationally.

The Rep’s acclaimed learning and outreach programme is one of the largest and most diverse of any arts organisation in the country. The Rep has nurtured new talent throughout its history – from Laurence Olivier and Peter Brook to its modern day youth theatre, and the ground-breaking Rep Foundry theatre-makers programme, it has offered opportunity and training for thousands of early career writers, directors, and artists.

Many of The Rep’s productions go on to have lives beyond Birmingham. Recent tours and transfers include The Play What I Wrote, Animal Farm, East is East, The Lovely Bones, Brief Encounter, Nativity! The Musical, The Government Inspector, Of Mice and Men, Anita and Me, Penguins and The King’s Speech. The theatre’s long-running production of The Snowman is celebrating its 28th anniversary as well as its 25th consecutive season at London’s Peacock Theatre.