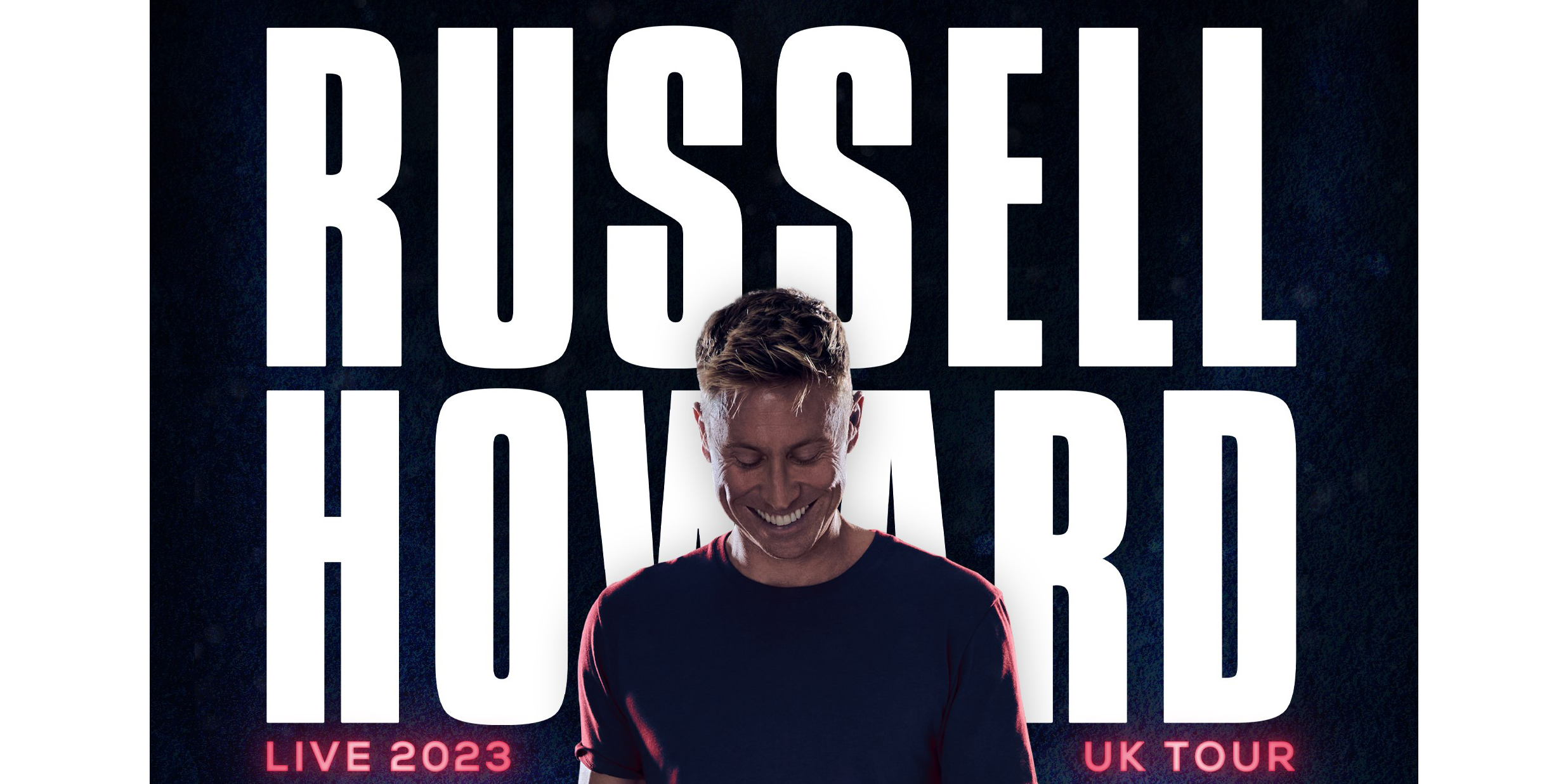 HIS FASTEST SELLING TOUR TO DATE

12th October – It was announced today that Russell Howard sold out 50 shows, 120,000+ tickets, over the opening on-sale weekend for his fastest selling tour ever, his first new since 2019. Following several venue websites crashing due to phenomenal demand, Russell has added an extra 22 shows amassing over 50,000 new tickets, including an extra Cardiff International Arena date (2 total), 3 new shows at Sheffield’s City Hall (5 total), 2 performances to the Bristol Hippodrome homecoming run (7 total) and 3 extra dates to the London Palladium run (6 total). The tour will now see Russell play 80 shows at venues nationwide from 16th March to 18th June 2023, to a capacity of 155,000 people.

“We knew demand for Russell’s shows would be high but this is extraordinary. This is one of the fastest selling comedy tours we’ve had on sale this year.”
Rob Wilmshurst, Group CEO, See Tickets

“Eventim saw a huge amount of demand for Russell’s tour since it went on sale last Friday and it has been our top seller every day since. At the time of writing this the tour has now extended to sixty one dates, including five London Palladiums!, but at the time you’re reading this I have no doubt that number will have risen again. I can comfortably say it’s the most amount of tickets Eventim UK have sold for a comedian this year.”
Martin Fitzgerald, Managing Director, Eventim UK

“Live comedy touring is back with a bang and we are thrilled at having been able to play a small part in again connecting Russell Howard with his army of loyal fans. Huge congratulations to Russell Howard on one of our busiest comedy onsales of the year so far!”
Andrew Parsons, Managing Director, Ticketmaster UK

Tickets are on sale now at russell-howard.co.uk

Selling over 300, 000 tickets, Respite saw Russell play a UK arena run plus a second UK leg including 5 Hammersmith Apollo dates culminating with taping his second Netflix special Lubricant which is streaming now. The two-part instalment includes a stand-up special featuring Russell striving to make sense of a world that is spinning out of control, Lubricant and a documentary mapping his attempts to keep performing throughout the Covid 19 pandemic, Until The Wheels Come Off. Following Lubricant’s release, Russell became the sole comedian to have two of the top ten most-streamed specials across all platforms in the UK in the last 12 months. Russell’s 2017 sell-out international tour, Round the World, saw him break the record for the biggest English speaking stand-up show in China and play a record-breaking 10-night run at the Royal Albert Hall, overtaking 8 in a row jointly held by Frank Sinatra and Barry Manilow. This tour concluded with the release of his first Netflix Special Recalibrate.

Russell is currently on our screens sharing his takes on spiralling headlines with the sixth series of The Russell Howard Hour on Thursdays at 10.30pm on Sky Max. Each episode is available to watch worldwide on Russell’s YouTube channel, with over 1.3 million subscribers, as well as being broadcast on Foxtel in Australia and TVNZ in New Zealand. The show immediately became one of Sky’s most successful entertainment series when it launched and has also gone on to see huge success online with over 500 million views on social media.

What The Press Have Said About Russell’s previous stand-up show, Respite:

“comedy A-lister…With smart, satisfying and well-rationed callbacks, Howard builds his giddy anecdotes into a tsunami of feelgood humour, drenching the sizeable crowd in positivity. No wonder they were moved to rise to their feet.” ★★★★½
Steve Bennett, Chortle

“carved a niche on stage and screen of going behind the headlines in a way that is funny, relatable and often edgier than he is given credit for… hugely popular satirical show”
Serena Kutchinsky, The Evening Standard