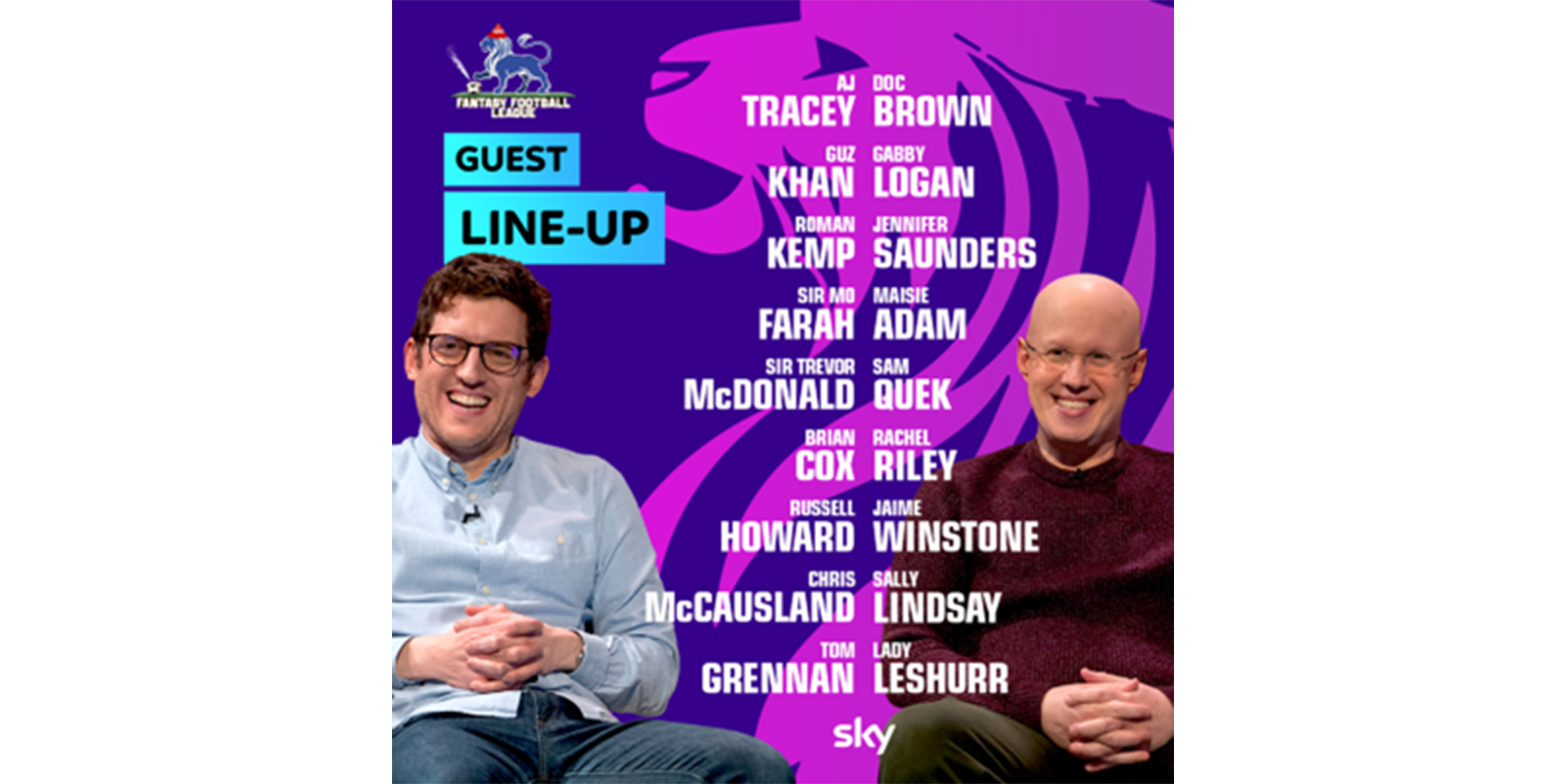 As the 2022 summer transfer window closes, Sky confirmed the all-new line up joining hosts Matt Lucas and Elis James on the Fantasy Football League sofa each week. Across the 16-episode series, comedian and football fanatic Andrew Mensah will be joining Matt and Elis, overseeing the celebrity league and sharing weekly comedy highlights from the world of football.

Each week, a pair of celebrity guest managers will join to chat about the week in football and share their fantasy teams from the digital dugout. Well-known faces lined up to appear on the new series include Succession’s Brian Cox, Jennifer Saunders, Tom Grennan, Roman Kemp, Sir Trevor MacDonald, AJ Tracey, Sam Quek, Sir Mo Farah and many more.

Fantasy Football League will delight fans old and new as it honours the format of the cult original series, with Matt and Elis combing over the week’s news for hilarious clips and anecdotes, as well as the return of the much-loved Phoenix from The Flames segment – where a famous moment from footballing history will be recreated with some very well-known faces…

To join in and compete with the celebrity guest managers each week, sign up to the league using code HFYXTQ via the official Fantasy Premier League app – find more information on the website.

Building on the success of Sky Originals like Chernobyl, Gangs of London and Brassic, we are doubling our investment in original content by 2024 through Sky Studios. Our new TV and movie studio, Sky Studios Elstree, is expected to create over 2,000 new jobs and generate an additional £3 billion of production investment in the UK over the first five years alone. Sky News provides impartial and trustworthy journalism for free, Sky Arts is the UK’s only dedicated free-to-air arts channel making the arts accessible for everyone and Sky Sports, our leading sports broadcasting service, brings customers some of the biggest and best global sporting events from the Premier League to Formula 1 and everything in-between. Sky Cinema is the home of Sky Original films with brand new films launching every month alongside an unrivalled range of the latest cinema releases and on demand library.

We believe that we can be a force for good in the communities in which we operate. We’re committed to being Europe’s first net zero carbon entertainment company by 2030 and we’re proud to be a Principal Partner and Media Partner of COP26 – the UN Climate Change Conference. We take pride in our approach to diversity and inclusion: we’ve been recognised by The Times and Stonewall for our commitment to diversity, and we’ve set ambitious 2025 targets to continue to increase diversity and representation.  We’re also committed to investing £30million across our markets over the next three years to improve our approach to diversity and inclusion, and to tackle racial injustice.

About NOW
NOW is the home of brilliant entertainment. We’re one of the UK’s leading streaming services with critically acclaimed shows, new and exclusive movies, unmissable sport and epic kids TV – all with no contract. Join in with an Entertainment, Cinema, Sports, or hayu Membership to stream instantly across TV, mobile, desktop and over 60 other devices. Watch on the go and even offline with our app by downloading shows and movies.

Plus, members can enhance their experience with NOW Boost – that’s full 1080p HD, Dolby Digital 5.1 Surround Sound and streaming on up to 3 devices at once, ad-free in VOD.

For super-fast broadband, members can enjoy a contract-free connection with a NOW Brilliant Broadband, Fab Fibre or Super Fibre Membership.