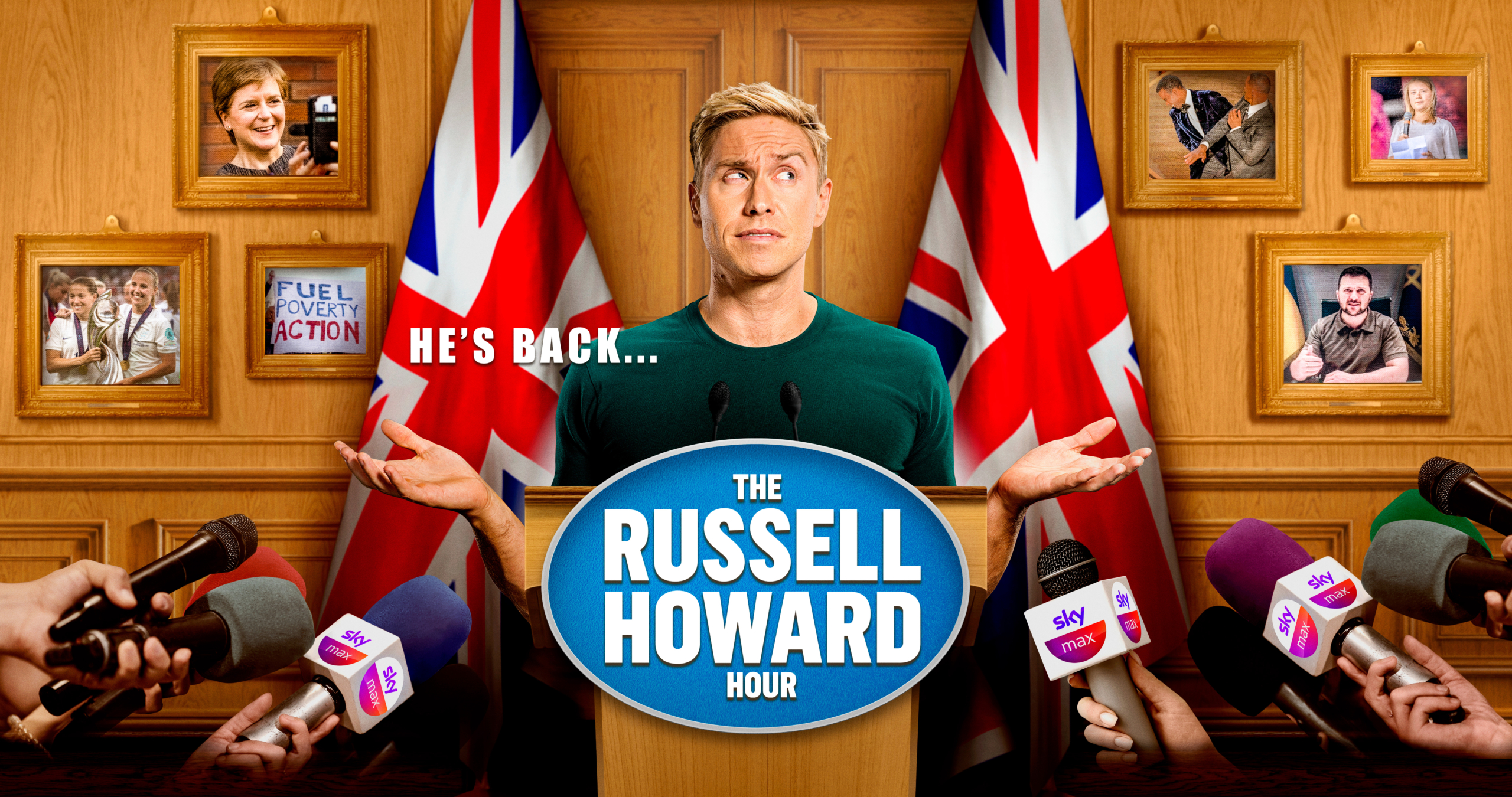 Russell Howard is back to share his hilarious takes on the spiralling headlines with the 6th series of The Russell Howard Hour, coming to Sky Max and streaming service NOW on Thursday 8th September at 10.30pm. The show immediately became one of Sky’s most successful entertainment series when it launched and has also gone on to see huge success online with over 400 million views on social media.

Obsessed with the news, the comedy megastar makes his highly anticipated return, following his third and biggest sell-out world tour. The satirical and topical series, which will include Russell’s 100th episode on Sky, is perfectly timed to launch during the week the new Prime Minister is set to be announced.

We will see the welcome return of Playground Politics, where Russell talks to entertaining school children around the country on a whole host of topics and issues and Good Deeds, with the show continuing to celebrate the nation’s acts of kindness plus live guest performances from the world of comedy.

All episodes of the series are available to catch-up on NOW. Each episode is also available to watch worldwide on Russell’s YouTube channel, with over 1.4 million subscribers, as well as being broadcast on Foxtel in Australia and TVNZ in New Zealand close to UK transmission.

Russell has over 10 million followers on social media. His recently created TikTok channel attracted over 100k followers within 48 hours of launching and is currently tracking over 1.1 million with over 50 million views including the first video featuring a sketch on the fuel crisis from the previous series of The Russell Howard Hour clocking up over 6.4 million views.

The sixth series of The Russell Howard Hour was commissioned by Zai Bennett, Managing Director of Content for Sky UK and Ireland and Phil Edgar-Jones, Director, Sky Arts and Head of Entertainment. The Commissioning Editors for Sky are Shirley Jones and Dwayne Eaton. The Executive Producers for Avalon are Richard Allen-Turner, James Taylor and Jon Thoday and the Series Producer Jason Dawson.

For more information, please contact Victoria Wedderburn on 07557160139 or VWedderburn@avalonuk.com and Jasmine Ruparelia on JRuparelia@avalonuk.com

Building on the success of Sky Originals like Chernobyl, Gangs of London and Brassic, we are doubling our investment in original content by 2024 through Sky Studios. Our new TV and movie studio, Sky Studios Elstree, is expected to create over 2,000 new jobs and generate an additional £3 billion of production investment in the UK over the first five years alone. Sky News provides impartial and trustworthy journalism for free; Sky Arts is the UKs only dedicated free-to-air arts channel making the arts accessible for everyone and Sky Sports, our leading sports broadcasting service, brings customers some of the biggest and best global sporting events from the Premier League to Formula 1 and everything in-between. Sky Cinema is the home of Sky Original films with brand new films launching every month alongside an unrivalled range of the latest cinema releases and on demand library.

We believe that we can be a force for good in the communities in which we operate. We’re committed to being Europe’s first net zero carbon entertainment company by 2030 and we’re proud to be a Principal Partner and Media Partner of COP26 – the UN Climate Change Conference. We take pride in our approach to diversity and inclusion: we’ve been recognised by The Times and Stonewall for our commitment to diversity, and we’ve set ambitious 2025 targets to continue to increase diversity and representation. We’re also committed to investing £30million across our markets over the next three years to improve our approach to diversity and inclusion, and to tackle racial injustice.

About NOW
NOW is the home of brilliant entertainment. We’re one of the UK’s leading streaming services with critically acclaimed shows, new and exclusive movies, unmissable sport and epic kids TV – all with no contract. Join in with an Entertainment, Cinema, Sports, or hayu Membership to stream instantly across TV, mobile, desktop and over 60 other devices. Watch on the go and even offline with our app by downloading shows and movies.

Plus, members can enhance their experience with NOW Boost – that’s full 1080p HD, Dolby Digital 5.1 Surround Sound and streaming on up to 3 devices at once, ad-free in VOD.

For super-fast broadband, members can enjoy a contract-free connection with a NOW Brilliant Broadband, Fab Fibre or Super Fibre Membership.