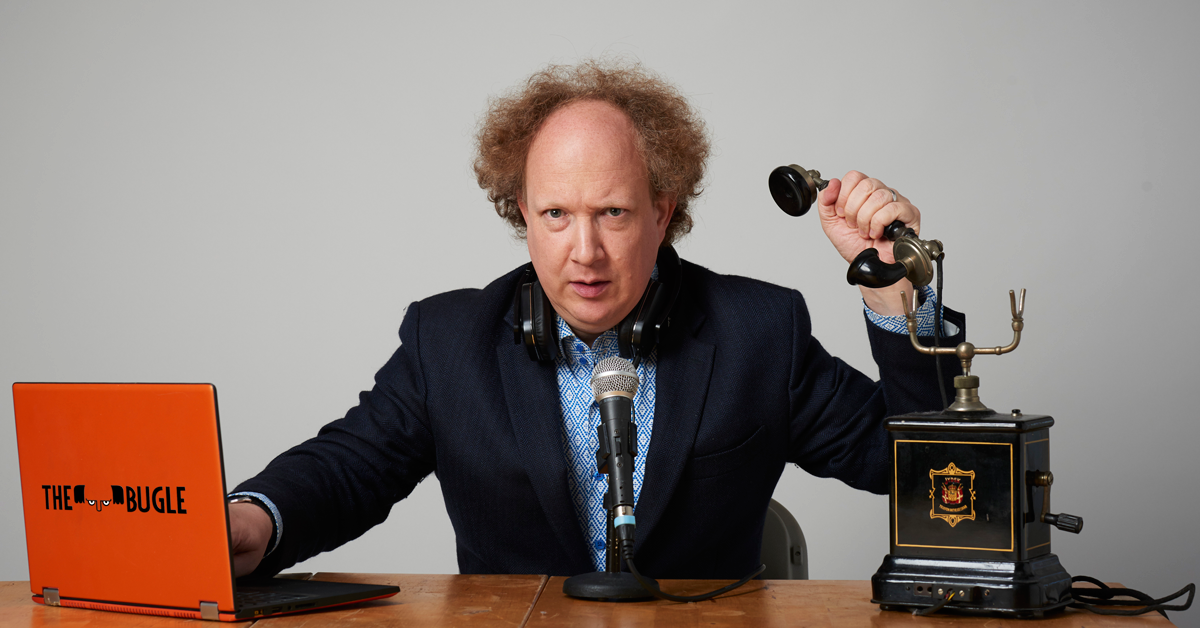 “Setting the world to rights, one joke at a time… a laugh-packed hour.”
Veronica Lee, The Arts Desk ★★★★

“The Bugle: Silliness and laughter…Zaltzman is a sharp writer and an excellent satirist who combines political observation with daft whimsy.”
Fiona Sturges, Financial Times

“Andy Zaltzman has revitalised the News Quiz… fizzes with a vitality and sense of fun that’s rare in such topical comedy warhorses.”
Steve Bennett, Chortle

It was announced today that Andy Zaltzman, chair of The News Quiz and Test Match Special statistician, extends his Satirist For Hire tour into Autumn 2022 and adds some very special live shows to celebrate the 15th anniversary of The Bugle podcast.

Full dates and tickets will be available at www.andyzaltzman.co.uk

In Andy’s unparalleled interactive stand-up show, Satirist For Hire, no two performances are ever the same. He invites audience members to submit topics, issues and miscellaneous gripes for him to satirise to order, meaning every show is unique and can encompass everything from the biggest political stories of the day to pedantic personal peeves, all delivered by one of Britain’s leading political comedians.

During its 15-year existence, The Bugle has achieved a huge global fanbase, totalling over 100 million global downloads across more than 600 episodes. Launched by Andy alongside John Oliver in 2007, The Bugle has been satirising the planet and related topics ever since. Andy co-hosted with John for the show’s 293-episode, eight-year first season, since when a selection of guest co-hosts from around the world – including Nish Kumar, Alice Fraser, Hari Kondabolu, David O’Doherty, Aditi Mittal and Mark Steel – have entertained The Bugle’s worldwide audience. Andy took The Bugle Live show on a successful 12-date American tour in 2019, which followed sell-out performances in the UK, Australia and Ireland. The 15th anniversary show will feature Andy, live co-hosts and guests on a big screen delivering freshly-hewn topical satire, as well as probable and certifiable lies, stuff about other things that have lasted 15 years, and miscellaneous other assorted high-grade nonsense.

A regular presence on Radio 4 over the last two decades, Andy became host of The News Quiz in 2020, bringing his distinctive cocktail of satirical incision, inventively-concocted analogies and frankly gratuitous cricket references in “an unheralded revolution” (Chortle), leading it to become the most in-demand comedy show on BBC Sounds, and the number 3 show overall. Andy is also the first stand-up comedian to double up as a cricket statistician for BBC Radio’s Test Match Special. He joined TMS in 2016, since when has become an integral part of the team, adding his wit, statistical expertise and obsessive lifelong fascination with cricket to one of the country’s best-loved broadcasting institutions. His extensive TV, radio and podcast appearances include Unspun with Matt Forde (Dave), Russell Howard’s Good News (BBC Three), Politics Live (BBC Two), WTF with Marc Maron, John Oliver’s New York Stand-Up Show (Comedy Central), The Alternative Comedy Experience (Comedy Central), The Weekly with Charlie Pickering (ABC), 7 Day Sunday (BBC Radio 5 Live), and The Now Show (BBC Radio 4).  Alongside Anuvab Pal, he wrote and presented the BBC Radio 4 shows Empire-ical Evidence and Future Empire-fect, which addressed Britain’s past and future relationship with India. In 2017, he presented My Life As… also on BBC Radio 4, in which he explored ancient philosophies such as Stoicism and Epicureanism.

Andy’s live stand-up has drawn audiences and critical acclaim around the UK and the world. He has toured extensively in the UK and Ireland, as well as in North America, India, New Zealand and Australia, where he has appeared at the Melbourne International Comedy Festival. He is also one of the few British comedians to have performed stand-up in Bangladesh. Andy has also been a regular at the Edinburgh Fringe throughout the millennium, building his reputation as one of the most inventive satirists in the world, and his annual Certifiable History review-of-the-year shows at the Soho Theatre have become a fixture in the satirical calendar.

In 2008 his book about the Credit Crunch, Does Anything Eat Bankers?, was published by Old Street Publishing. He has also written for ESPNcricinfo, The Times, The i, and The Guardian.

“Political satire at its most enjoyable”
Dominic Maxwell, The Times ★★★★

“much more than clever, dextrous wordplay… An evening of wit and wisdom, profanity and profundity”
Bruce Blacklaw, The Scotsman ★★★★