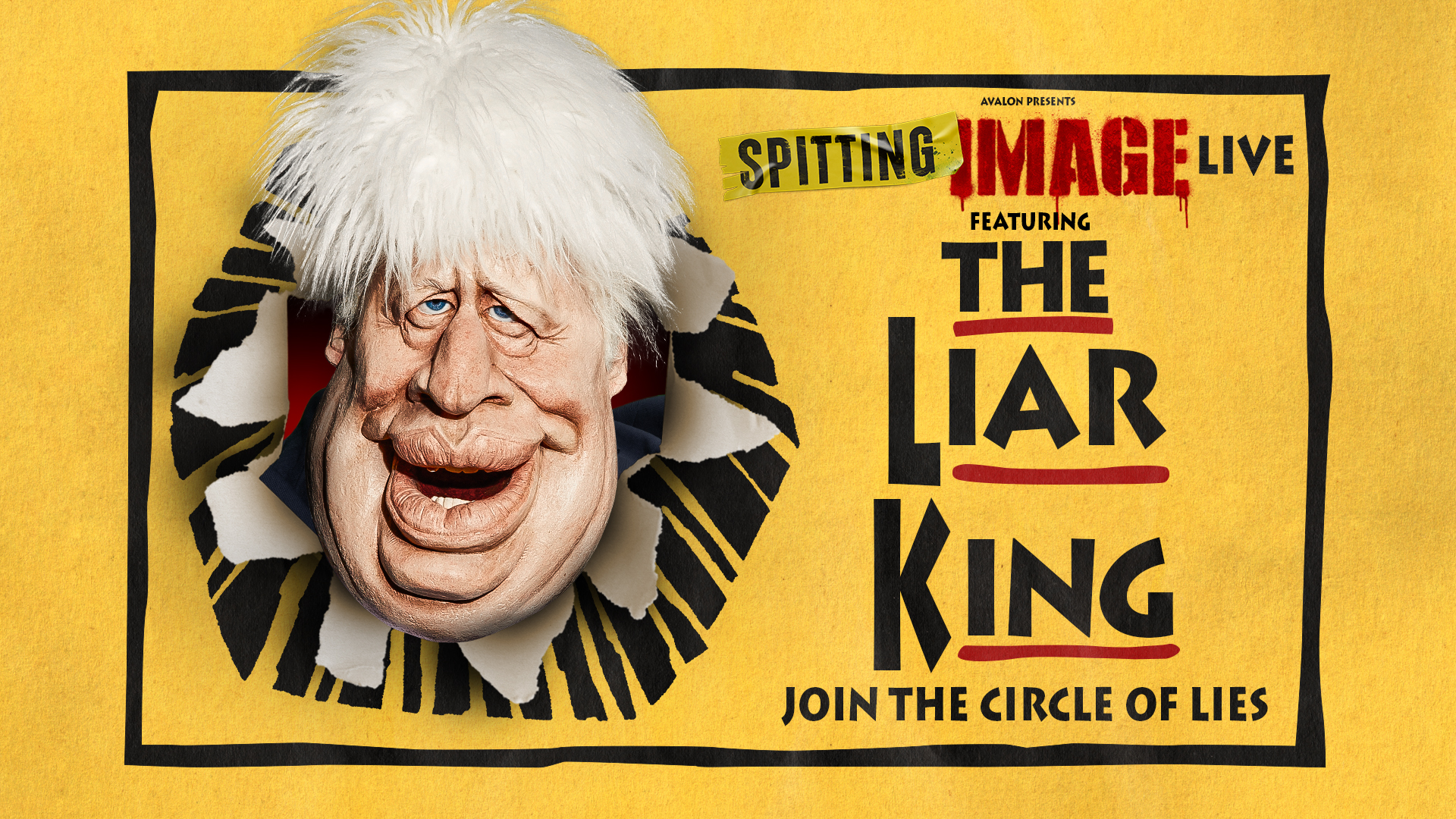 Whilst Boris and his chums level themselves ever upwards to the sunlit uplands, Spitting Image are preparing to level them down to size in a theatrical extravaganza like no other. Join the circle of lies and see the puppets live on stage for the first time ever. Witness a monstrous cast of stars including The Liar King himself, Boris Johnson. Plus Tom Cruise & Michael Gove (together on stage for the very first time), Adele, Tyson Fury, Harry & Meghan, Stormzy, Beyoncé, Vladimir Putin & Xi Jinping, and many more.

Written by Al Murray, Matt Forde and Sean Foley. Directed by Birmingham Rep’s Artistic Director, double Olivier Award winner, Sean Foley and produced by Avalon and Birmingham Rep, this is sure to be the must-see theatrical spectacular of 2023.

Spitting Image co-creator Roger Law said: “Birmingham Rep and Spitting Image have been receiving numerous calls from friends of Boris Johnson pleading with us not to cancel his puppet from our theatre show, ‘The Liar King’, opening in the New Year.  Recent events made it doubtful if either Boris or Prince Andrew would be treading the boards… but after careful consideration we are now able to reassure them both that their puppets are the kind of heartless bastards essential for our kind of refined satire.  Boris’s friends please note, and report to him that, YES, his puppet will appear wearing a gilet jaune yellow jacket pretending to be useful!”

Sean Foley, the Artistic Director of Birmingham Rep, whose Olivier nominated production of Upstart Crow returns to the West End this Autumn, said: “It’s not often you get to direct Tom Cruise, Stormzy, Boris Johnson, Beyonce, and Her Majesty the Queen all on the same bill… I’m thrilled to be part of the team bringing this iconic British comedy to the stage – in particular to be working with the inspiring Roger Law, original co-creator of this legendary show. From the scathing to the silly, from brutal political satire to sending up celebrity, Spitting Image has always fearlessly pointed at the Emperors of our society and gleefully stripped them naked. This live show will be no different…”

The oldest building-based theatre company in the UK, The Rep has an unparalleled pioneering history and has been at the forefront of theatre in this country for over 100 years. It is a registered charity (number 223660).

The Rep’s mission is to create artistically ambitious popular theatre for, by, and with the people of Birmingham and the wider world.

The commissioning and production of new work lies at the core of The Rep’s programme and over the last 15 years, the company has produced more than 130 new plays. As well as presenting over 60 productions on its three stages every year, the theatre tours its productions nationally and internationally. The Rep’s acclaimed learning and outreach programme is one of the largest and most diverse of any arts organisation in the country. Every year we have over 70,000 contacts with young people and adults in the community on projects from drama or writing workshops to large-scale productions. The Rep is also committed to nurturing new talent through its youth theatre groups, and it offers training for early career writers, directors, and artists through its ground-breaking Rep Foundry theatre-makers programme.

Many of The Rep’s productions go on to have lives beyond Birmingham. Recent tours and transfers include The Lovely Bones, Brief Encounter, Nativity! The Musical, What Shadows, LOVE, The Winslow Boy, The Government Inspector, Of Mice and Men, Anita and Me, Penguins and The King’s Speech. The theatre’s long-running production of The Snowman celebrated its 25th anniversary as well as its 22nd consecutive season at London’s Peacock Theatre in 2019.