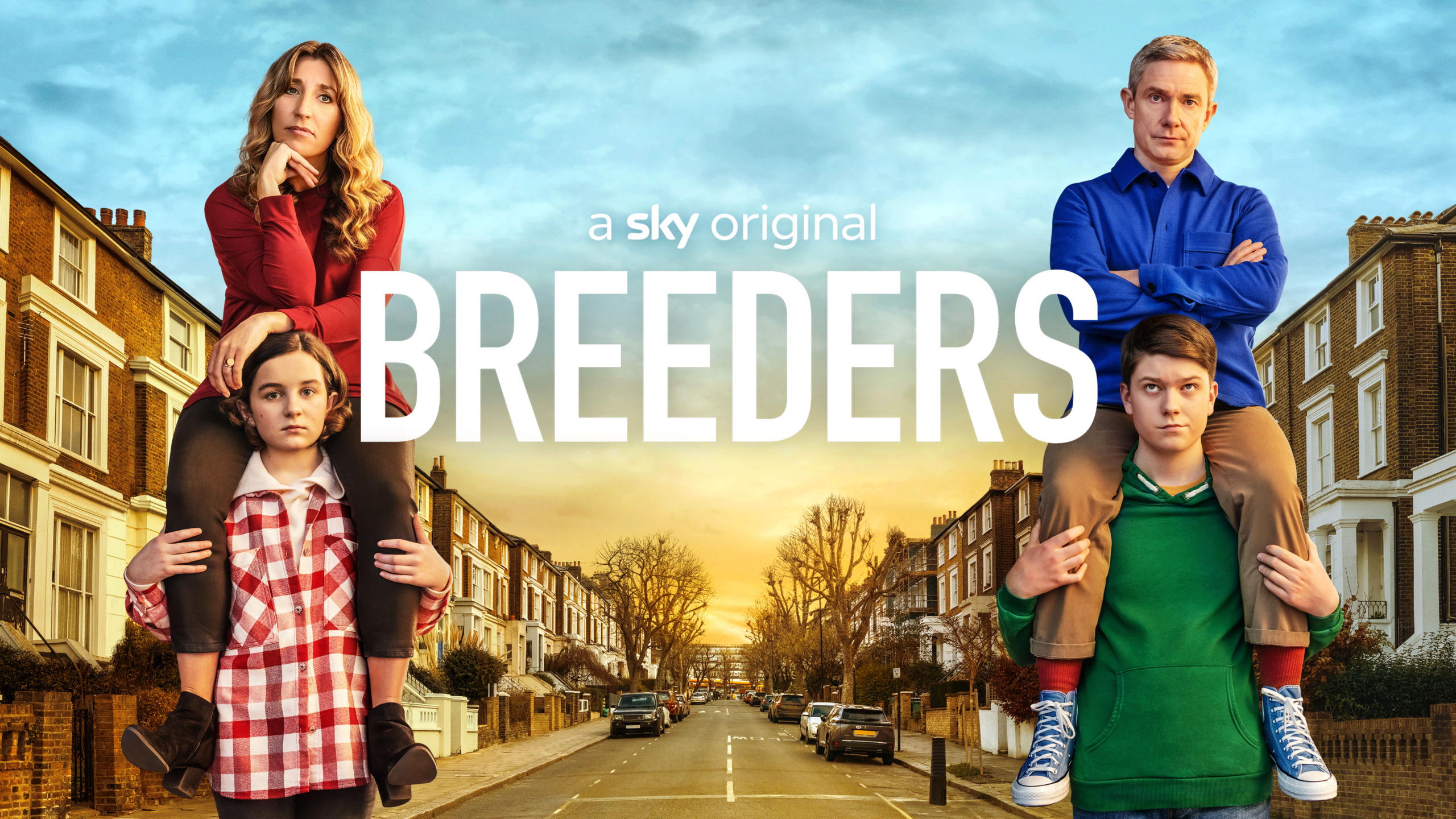 “beyond comedy and towards something rare… Simon Blackwell, Chris Addison and Freeman himself have given us not only a couple we can honestly believe in but also a drama for modern times”
Euan Ferguson, The Observer

Breeders – “the mother – and father – of all comedies…thick with laughs” (Mail On Sunday) – continues its bitter-sweet look at the struggles of modern parenthood. Season 3 starts days after Season 2 ended, as the Worsley family reels from teenaged Luke (Alex Eastwood) punching his dad, Paul (Martin Freeman). Paul’s moved out and is staying at his mother-in-law Leah’s (Stella Gonet) house. He should be lonely but actually the simpler life has its appeal.  Eventually, though, amends with Luke must be made. Meanwhile Ally (Daisy Haggard) has her own problems – with work, with her early menopause and with her increasingly strained relationship with her newly adolescent daughter, Ava (Eve Prenelle). Gallows humour and large glasses of wine only go so far in quelling the angst…

Sky Comedy’s Breeders is produced by Avalon and FX Productions for FX Networks and Sky Originals. Academy Award®-nominee and double Emmy® Award-winner Simon Blackwell is showrunner. Breeders is created by Blackwell, double Emmy Award and Directors Guild of America Award winner Chris Addison and Emmy and BAFTA®-winning Martin Freeman, who also stars alongside Daisy Haggard who received a BAFTA®  nomination for her role in the show last year.

All 10-episodes of Breeders will be available 13 July on Sky Comedy, on demand and on streaming service, NOW. Catch up on the first two series available on demand.

“terrific: dark, fresh, brutal, funny…Simon Blackwell and Chris Addison have managed the near-impossible by creating a parenting comedy that is not twee and makes the tired tropes of sleep deprivation and school-catchment obsession funny.” ★★★★
Carol Midgley, The Times

“crafted to perfection, Blackwell supplies a steady stream of laugh-out-loud lines and Freeman and Haggard immediately gel as a finely tuned double act playing off each other with exquisite timing” ★★★★
Mark Wareham, The Mail On Sunday

“Breeders whizzes by, all zingers and howlers.” ★★★★
David Sexton, The Evening Standard

“a hilariously no-holds-barred look at the real challenges of parenting in the contemporary world…a brilliantly shocking opening that sets the tone for a show, which is beautifully observed and very funny” ★★★★★
Boyd Hilton, Heat Magazine

“a thoughtful exploration of fatherhood.”
Helen Stewart, The Sunday Times

“Freeman and Haggard are thoroughly appealing performers…the two children — Alex Eastwood and Eve Prenelle, both new to the roles — are excellent”
Dominic Maxwell, The Times

“honest and uncompromising comedy pulling no punches as it explores the pressures of raising a family. Millions of mums and dads across Britain will sympathise…prepare for laughs, tears and plenty of swearing” ★★★★
Sean Marland, TV Times Magazine

“a corker of an introduction…uncompromising but hilarious” ★★★★★
Mike Ward, The Daily Star

“full of wonderful lines and hilarious situations. In short, it was everything you want from such a show” ★★★★
The Daily Star Sunday

“Freeman and Daisy Haggard, who plays Paul’s wife, Ally, are excellent as the couple whose united front cracks as sleep deprivation kicks in.”
Victoria Segal, The Sunday Times

“When the great corona-shutdown kicks in, the Breeders crew might find they’ve made the most accidentally zeitgeisty programme of all time”
Victoria Coren Mitchell, The Telegraph

“Tune in to for Freeman on top form”
Ammar Kalie, The Guardian and The Observer

“Welcome to the set of Breeders, a new show that takes the best ingredients of Motherland and Outnumbered – middle-class dramas about parenting – and adds a large dose of the sheer fury that it can induce…Bitingly funny”
Nicole Lampert, The Daily Mail

“If you’re in need of a good laugh, this refreshingly frank parenting sitcom will do the job…witty, honest and often relatable”
Jen Crothers and Nathalie Whittle Round, Good Housekeeping

“The turbulent push and pull of how much independence you should give your children is perfectly realised.”
Joe Clay, The Times

For further information, please contact: Victoria Wedderburn at Avalon on VWedderburn@avalonuk.com or 07557160139

Building on the success of Sky Originals like Chernobyl, Gangs of London and Brassic, we are doubling our investment in original content by 2024 through Sky Studios. Our new TV and movie studio, Sky Studios Elstree, is expected to create over 2,000 new jobs and generate an additional £3 billion of production investment in the UK over the first five years alone. Sky News provides impartial and trustworthy journalism for free; Sky Arts is the UKs only dedicated free-to-air arts channel making the arts accessible for everyone and Sky Sports, our leading sports broadcasting service, brings customers some of the biggest and best global sporting events from the Premier League to Formula 1 and everything in-between. Sky Cinema is the home of Sky Original films with brand new films launching every month alongside an unrivalled range of the latest cinema releases and on demand library.

We believe that we can be a force for good in the communities in which we operate. We’re committed to being Europe’s first net zero carbon entertainment company by 2030 and we’re proud to be a Principal Partner and Media Partner of COP26 – the UN Climate Change Conference. We take pride in our approach to diversity and inclusion: we’ve been recognised by The Times and Stonewall for our commitment to diversity, and we’ve set ambitious 2025 targets to continue to increase diversity and representation. We’re also committed to investing £30million across our markets over the next three years to improve our approach to diversity and inclusion, and to tackle racial injustice.