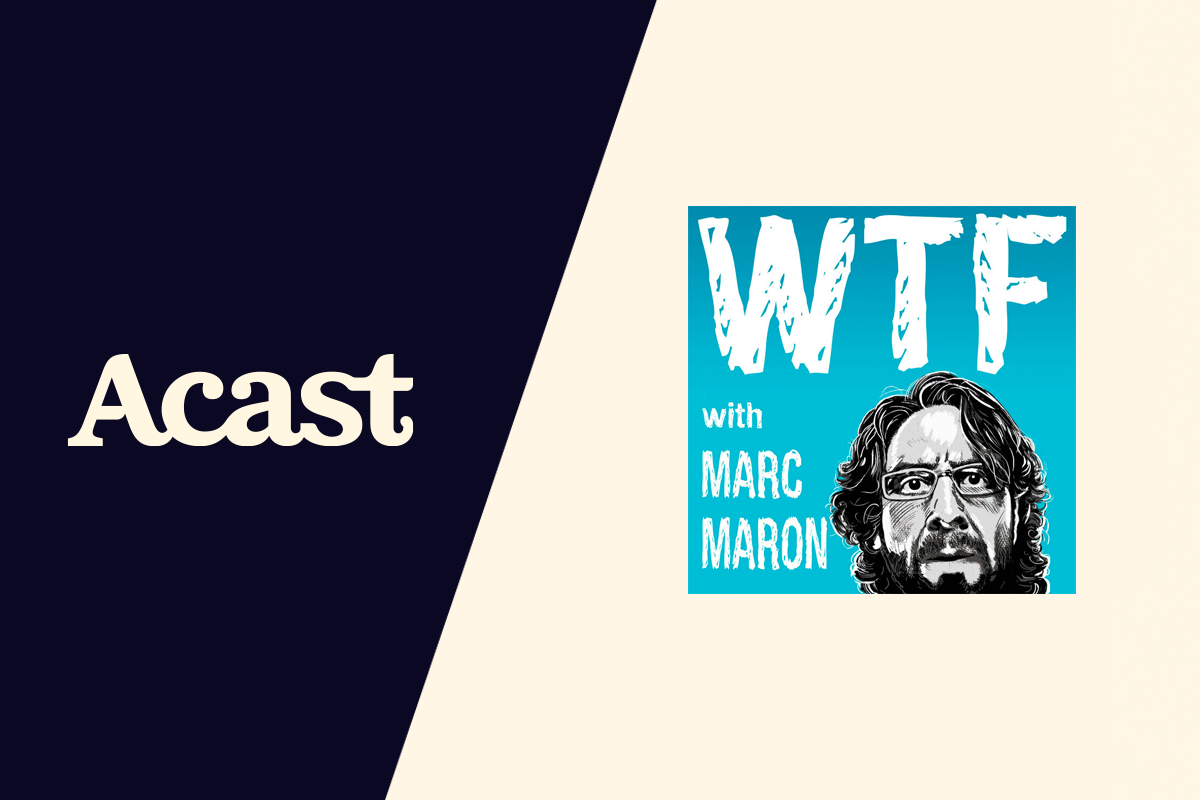 Acast, the world’s leading independent podcast platform, has today entered into a three-year partnership with podcast creator Marc Maron and his podcast WTF with Marc Maron. The podcast will now be hosted, monetized and distributed via Acast, and will also be making use of the platform’s paid memberships offering, Acast+. Maron’s podcast has approximately 55 million listens per year, primarily in North America.

Maron has, since the podcast started in 2009, become a phenomenon in the podcasting world and over the years has interviewed personalities including President Barack Obama, Kate Winslet, Keith Richards, Nicole Kidman and Robin Williams – the latter being inducted into America’s National Recording Registry earlier this year. Shortly after Maron launched his podcast, it established itself as one of the world’s largest and most popular shows.

This partnership means that Acast will be the exclusive host and sales partner for the podcast, its full back catalog and other related materials. WTF with Marc Maron will continue to be released twice a week and will be available to all listeners, wherever they choose to listen to their podcasts. The agreement will come into effect from July 1, 2022.

WTF with Marc Maron will also be utilizing Acast+, giving the podcast additional monetization options including Maron’s back catalog and brand new bonus content for Maron’s paying members – without restricting them to listen to their paid-for content on a specific podcast player. In addition, Acast will offer advertisers the opportunity to promote their brand to Maron’s millions of listeners though both dynamic and in-episode sponsorships, plus much more.

“Entering into a partnership with the podcast giant Marc Maron is a big win for Acast and for the open podcasting landscape, as this deal guarantees that the podcast can continue to be listened to by everyone, everywhere and on their preferred listening platform. In addition to WTF with Marc Maron being one of the largest podcasts in the world, Maron is also one of the very best hosts in the business. This collaboration presents a real step forward for us in the North American market, adding millions of listens and strengthening our brand even further in the region. At the same time we will also be working with the show to increase the number of Marc Maron fans across the globe.” said Ross Adams, CEO of Acast.

“We’ve amassed an amazing catalog over the years and Acast offers us an opportunity to make it available in a way it hasn’t been before, especially in international markets. We’ve released two episodes every week for almost 13 years and we don’t plan on stopping any time soon. Acast won’t stand in the way of us doing the show the way we want to do it, the way we like doing it, the way we’ve always done it. They’re excited and focused and I think the partnership will be very productive.”  said Marc Maron, host of WTF with Marc Maron.

“We take great pride in maintaining the high quality and universal accessibility of WTF, and we know we are in very safe hands with Acast. We will be utilizing both their expertise and innovative technologies, such as Acast+, to ensure our podcast stays ahead of the game. We look forward to sharing more and more great content with our listeners.” said WTF with Marc Maron co-creator and producer Brendan McDonald.

The deal was negotiated by Avalon who represent WTF with Marc Maron and Marc Maron.

Acast was founded in 2014 and is the world’s largest independent podcast company.

A pioneer in the open podcast ecosystem, Acast’s strategy is to become the world’s largest marketplace for podcast monetization by connecting podcast creators, advertisers and paying listeners with its technology. Acast hosts 47,000 podcasts, supplying their content directly to hundreds of listening apps, and generating and monetizing more than 400 million listens every month. If you’re listening to an Acast-connected podcast and hear an ad, it’s Acast delivering that ad behind the scenes and sharing the revenue with the podcast creator. Podcasters come to Acast to reach and grow as large an audience as possible, and to monetize those listens to their full potential — including through paid subscriptions using Acast+. Advertisers use our advanced targeting capabilities to reach these hyper-engaged audiences in the most effective ways. Acast’s headquarters are located in Stockholm, Sweden, and the company has expanded globally in recent years to have a presence in 14 countries: Australia, Canada, Denmark, Finland, France, Germany, Ireland, Mexico, New Zealand, Norway, Spain, Sweden, the UK and the US. In 2021 the number of listens to Acast podcasts reached 3.7 billion, with net sales exceeding SEK 1bn. Acast was co-founded by Johan Billgren, its Chief Innovation Officer, and is listed on the Nasdaq First North Premier Growth Market. Certified Adviser is FNCA Sweden AB, info@fnca.se, +46 (0) 8528 00 399.