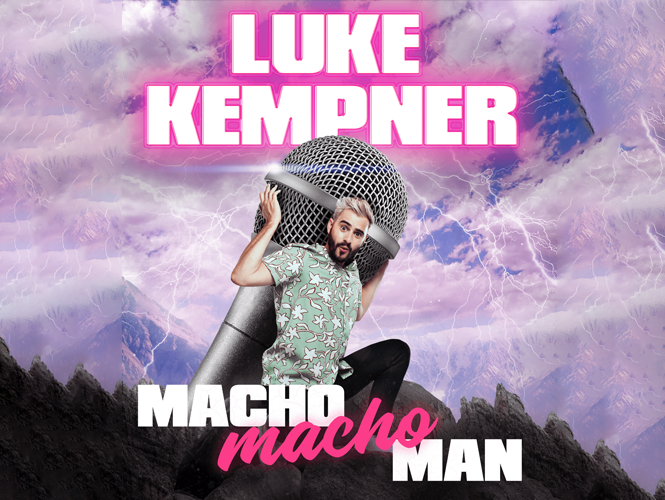 ‘A hugely accomplished impressionist, with the technical skill to jump in and out of a huge range of real-life characters in a beat.’

Star of Spitting Image, Steph’s Packed Lunch and with over 10 million views of his online videos, comedian and impressionist Luke Kempner is one of the UK’s hottest mimics and stand-up comics. With a hilariously razor-sharp roster of contemporary impressions ranging from Piers Morgan and Bojo to Ted Hastings and Paul Hollywood, Luke has become a household name and is bringing his highly anticipated show Macho Macho Man – ‘it’s Les Mis meets Line Of Duty’, it’s ‘Hamilton meets I’m a Celebrity Get Me Out of Here’ to the Edinburgh Fringe. This follows his previous show, House of Faces, which sold out at the Fringe and then toured nationwide throughout 2019. Luke can be seen from 3rd – 29th August (excluding 17th August) at 6.40pm at Pleasance, Above.

Luke is a Macho Macho Man. He came up with the title whilst listening to his Les Mis album for the 28,000th time. Luke tries to work out what masculinity really means with the help of Louis Theroux, the cast of Downton Abbey and even Jürgen Klopp. Luke struggles to fit in, between turning up to a dance audition in football boots to falling in love with a “cool guy” that sits in the row in front of him at the football. Will Luke ever become the Macho Macho Man he dreams of?

The last couple of years have seen Luke become a regular contributor/presenter on Steph’s Packed Lunch (Channel 4) and voice two series of Spitting Image (BritBox).  Other TV appearances include The Last Leg (Channel 4), ITV2’s Stand-Up Sketch Show, Love Island Aftersun, It Takes Two (BBC2) and Celebrity Karaoke Club (ITV2).  Luke is also familiar to television audiences with his regular appearances in the BAFTA winning Murder in Successville (BBC3), and as the breakout star of The Imitation Game on ITV1, which led to an appearance on The Royal Variety Performance (ITV1). His other credits include Celebability, Hey Tracey (ITV2) and Pointless Celebrities (BBC1). Luke created and starred in his own review show for ITV2, entitled Luke Kempner’s Impression of 2015 and was the resident comedian on Celebrity Big Brother’s Bit On The Side (Channel 5) for 9 series. He is also a regular on BBC Radio 4’s topical comedy institutions The Now Show and News Jack.