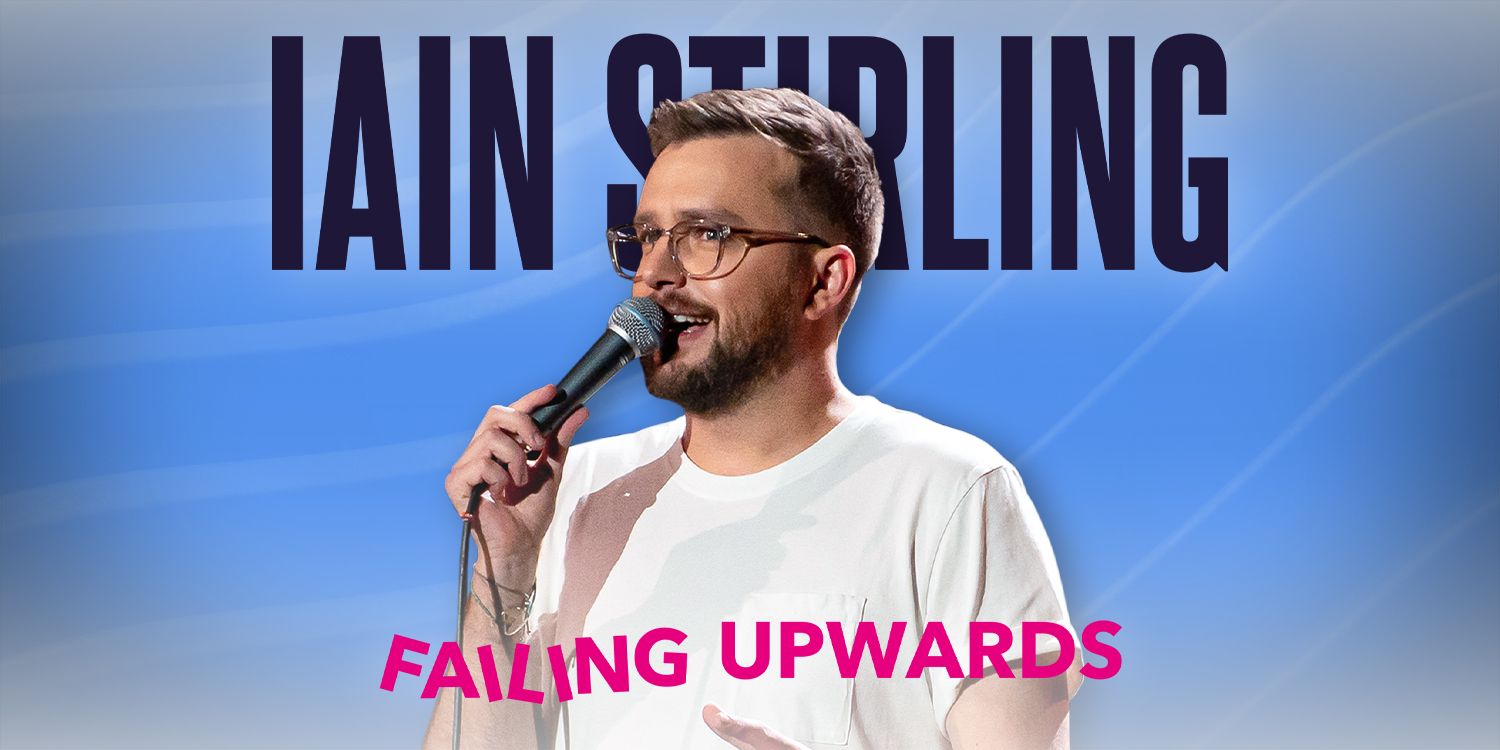 27th April 2022 – BAFTA-winning comedian, voice of Love Island and co-creator and star of Buffering, Iain Stirling is set to release his first Amazon Original stand-up special Failing Upwards exclusively on Prime Video in over 200 countries and territories on 27th May.

The brand new special recorded at London’s iconic Alexandra Palace Theatre explores topics including Iain’s inability to function in the most basic of public settings, the pressures of being in the public eye and that one time a man stole his shoes.

Iain recently created, wrote and starred in Buffering (ITV2), a millennial sitcom following Iain, a children’s TV presenter with an aversion to kids, and his friends who are all navigating that age where they’re too old for nightclubs but too poor for mortgages. Buffering adds to an extensive list of television credits including Taskmaster (Dave),  The Russell Howard Hour, Comedians Watching Football with Friends (Sky One), The Jonathan Ross Show, Celebrity Catchphrase (ITV1), Celebrity Gogglebox, The Great British Bake Off: An Extra Slice (Channel 4) Saturday Kitchen, The One Show (BBC One), The Comedy Bus, Russell Howard’s Stand Up Central, The Chris Ramsey Show, Drunk History,  and The Comedy Store (Comedy Central). He co-wrote and hosted six series of the comedy panel show The Dog Ate My Homework (CBBC) which saw him win 2018’s RTS Scotland’s On-Screen Personality and 2017’s Children’s BAFTA Best Presenter Award (2017).

He is also the author of the book Not Ready to Adult Yet which was published through HarperCollins, along with a companion podcast of the same name.

For more information please contact: Victoria Wedderburn at Avalon on vwedderburn@avalonuk.com or 07557160139

Other Things The Press Has Said About Iain Stirling

“An extremely funny hour of observational and surreal comedy”

“Love Island is really funny, thanks in no small part to Scottish comedian Iain Stirling’s voiceover”

What The Press Said About Buffering

“It’s a level of expertise that clearly shows… it is in the finest traditions of twentysomething sitcoms such as Friends… tear-jerking and heart-warming.”

“Buffering does have the pacey feel of an American sitcom with storylines and jokes jostling for your attention… a strong ensemble cast… the plot is more ambitious than you might expect for ITV2…Bugeja was big on structure, Stirling wanted to get as many jokes in as possible. Judging by the first episode they have reached a successful compromise”

“A funny sitcom…a meditation on the myriad challenges of millennial life…zippy, gag-dense…features the sort of narrative threads you might expect to see in a gritty sitcom”

“It’s Iain, he’s hilarious, he’s got a new show out… the headline of your character is brilliant, I watched it, I howled, I fell off the bed… it’s very fast-moving… it reminds me of Modern Family”

“Having seen the whole series in one go, I loved it, it’s one that is definitely filthy, what I’m really impressed by, is Iain, with how you’ve obviously drawn to some extent your experience in children’s TV into this in terms of source material”

“I absolutely loved it…within a few days I had binge-watched the whole series and found myself frantically googling to find out if there would be another…it even manages to balance funny moments with emotional ones, which isn’t easy. I’d recommend giving it a go on ITV Hub”

“Hilariously surreal experiences…Stirling set out to make a series abounding with punchlines. Yet Buffering doesn’t shy away from the more difficult topics”

“[Iain] certainly has a more thoughtful side, too. It’s something that’s demonstrated his new sitcom Buffering…The show is packed full of funny moments…(a particular highlight being the desperate lengths Iain’s character will go to guest star on The Chase) but it doesn’t shy away from the more serious ones, either.”

“Quick-paced and punchy, Buffering also contains a lot of heart and characters to instantly connect with…Buffering is one of a number of shows featuring young UK comedians to have emerged in recent years as the next generation of comedy storytellers are given the chance to shine”

“There’s already a lot of hype around his newest venture: Buffering”

“I watched the first episode this morning and was giggling away in the back of a taxi on the way to work, I really enjoyed it”

“Former kid’s TV host Iain Stirling, aka the voice of Love Island, has poured his comedic talent into this six-part sitcom that has a solid grounding in real life… one ridiculous situation to the next.”

“ITV2 have had a tricky relationship with sitcoms in the past, Plebs undeniably their best, until Buffering, a smart, funny and warm sitcom”

“Beyond heartbreak, sex and navigating your career in your early twenties, the show takes on a huge feat of tackling miscarriage.”

“A love letter to that very generation”

Emily Baker, The i

“It’s not what you expect from an ITV2 sitcom and is handled pretty sensitively, showing that Buffering can be daft but deft too.”

Prime Video offers customers a vast collection of TV shows, movies, sport and more — all available to watch on practically any device:

Prime Video is just one of many benefits included with a Prime membership, along with unlimited fast free delivery options on millions of items as well as exclusive deals and discounts at Amazon.co.uk, exclusive content with Prime Gaming, access to ad-free music, Kindle ebooks, and unlimited photo storage. To sign-up or start a free trial of Prime visit: Amazon.co.uk/prime

For Avalon news visit: www.avalonuk.com/press or follow @avalonentWorkaholics (Comedy Central USA). Avalon also distributes its catalogue of programmes to over 150 countries worldwide. Avalon has produced many globally successful podcasts and is at the top of the UK iTunes chart with the multi-award-winning Shagged. Married. Annoyed by Chris and Rosie Ramsey.