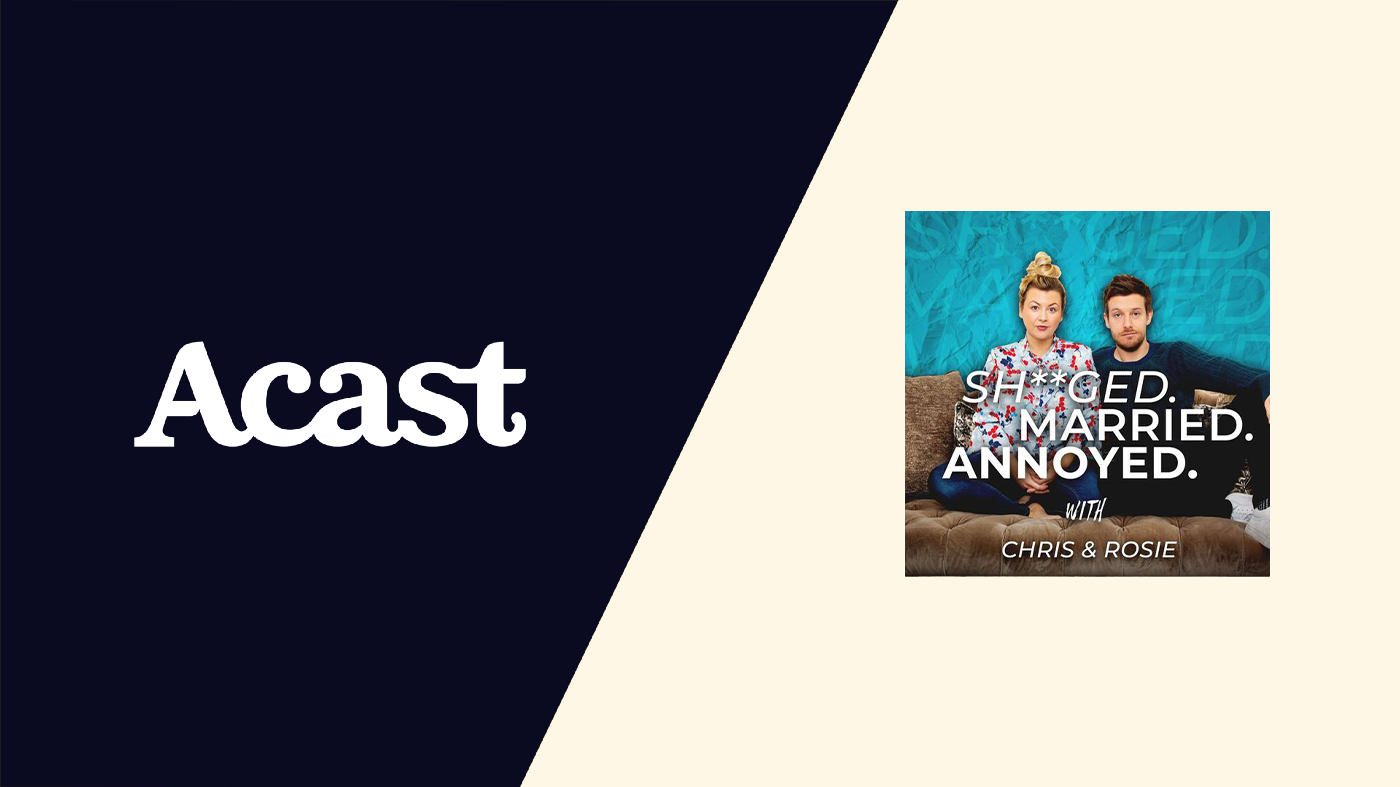 Acast, the world’s leading independent podcast company, today announces a multi-year extension of its relationship with hugely popular British podcast Sh**ged.Married. Annoyed. Hosts Chris and Rosie Ramsey have captured the hearts and ears of podcast listeners everywhere with their hilarious podcast about married life, parenting and everything in between. Produced by Avalon, who also represent Chris and Rosie Ramsey, Sh**ged.Married.Annoyed. will continue as part of the Acast Creator Network, with Acast hosting, distributing, monetizing and growing the show globally.

Sh**ged.Married.Annoyed. is nothing short of a phenomenon. With 150 episodes under its belt, a record-breaking live arena tour (selling out London’s O2 Arena and Wembley SSE Arena in London alone), a Sunday Times №1 best-selling book and an upcoming BBC TV show, the Ramseys are genuine podcast superstars.

The episodes are full of relatable stories about their relationship and family, and hysterical listener questions — and its popularity has resulted in more than 93 million episode downloads to date.

As part of the Acast Creator Network, Sh**ged.Married.Annoyed. is supported by Acast’s range of monetization and growth options — which include premium ad products available exclusively via the Acast Marketplace, such as sponsorship, branded content, and direct listener support through Acast+ subscriptions.

Sh**ged.Married.Annoyed. will also continue to benefit from Acast’s commitment to open podcasting, ensuring the podcast remains available across all podcast listening platforms, and bringing the show to new audiences across the globe.

Chris and Rosie said: “We love working with Acast. The podcast has turned our life upside down and has given us a platform to share our relationship and our stories with millions of people — which, perhaps surprisingly, we still think is a good idea. We can’t wait to continue collaborating with Acast and reaching podcast listeners around the world, thanks to its support for open podcasting.”

Veronika Taylor, SVP of Acast Creator Network said: “Sh**ged.Married.Annoyed is a podcasting masterpiece, but it’s so much more than that for Chris, Rosie and their millions of fans — you just have to look at their UK-wide tour and sell-out live shows at Wembley Arena and the O2 to see how much people love this podcast and everything that goes along with it. When we speak to new creators, advertisers and audiences, this show is consistently named as a firm favourite — but we know there’s much more we can do together, and we’re looking forward to building on their incredible success.”

Richard Allen Turner, Executive Producer at Avalon, said: “Acast have been an excellent partner on this exciting journey for the show, and we’re all delighted to be continuing the relationship with their talented team into the future.”

Acast hosts more than 35,000 podcasts worldwide, offering growth support and monetisation to global smash hits including The Guilty Feminist, Fearne Cotton’s Happy Place, Taskmaster The Podcast and Katherine Ryan’s Telling Everybody Everything, as well as podcasts from major publishers including the Guardian, The Times and the BBC. Acast pioneered true dynamic ad insertion technology in podcasting, which allows for the delivery of timely, contextualised podcast ads specific to listeners across any device or platform.

For brands and advertisers looking to work with the show, opportunities are available exclusively through the Acast Marketplace. Get in touch via uksales@acast.com.

What the Press have said about Sh**ged. Married. Annoyed.

“That Chris is a comedian and Rosie easily his equal in the quick-and-funny stakes explains why the show picked up the listeners’ choice gong at the British Podcast awards last month and has topped 25 million downloads.  This is bickering at its best.”
Francesca Angelini, Sunday Times

“This is one of the UK’s most listened podcasts, and will make you roar with laughter every week.”
Sharnaz Shahid, Hello

Acast was founded in 2014 and is one of the most eminent podcast platforms, and a pioneer in the open podcast ecosystem, connecting all podcasting stakeholders to one common software infrastructure. Through its infrastructure, Acast allows advertisers to efficiently target an engaged audience of listeners through dynamic ad insertion, while podcasters are given access to a range of monetization opportunities and the necessary tools to expand their listener base. The company has a global footprint across 12 countries and, during 2020, had approximately three billion listens on Acast-connected podcasts. Today, Acast hosts 35,000 shows. Acast’s headquarters are located in Stockholm, Sweden and the Company has nine local subsidiaries including UK, US, Australia, Norway, France, Germany, Ireland, Mexico and Canada. In recent years, Acast has undergone an expansion with continued strong growth, with net sales increasing from SEK 180 million in 2018 to SEK 592 million in 2020. As a result of Acast’s recent growth initiatives, the number of listens grew from approximately one billion (2018) to three billion (2020). In the third quarter of 2021, Acast had 891 million listens and an organic net sales growth of 89% (versus Q3 2020).

Avalon produces many successful podcasts including: Sh**ged Married Annoyed; The Political Party with Matt Forde; Taskmaster The Podcast, hosted by Ed Gamble; and represents podcast creators and hosts from shows including: Richard Herring’s Leicester Square Theatre Podcast (RHLSTP); Off Menu; WTF with Marc Maron; How to Citizen with Baratunde Thurston; The Bugle; and This Is Important with Blake Anderson, Adam Devine, Anders Holm and Kyle Newacheck.