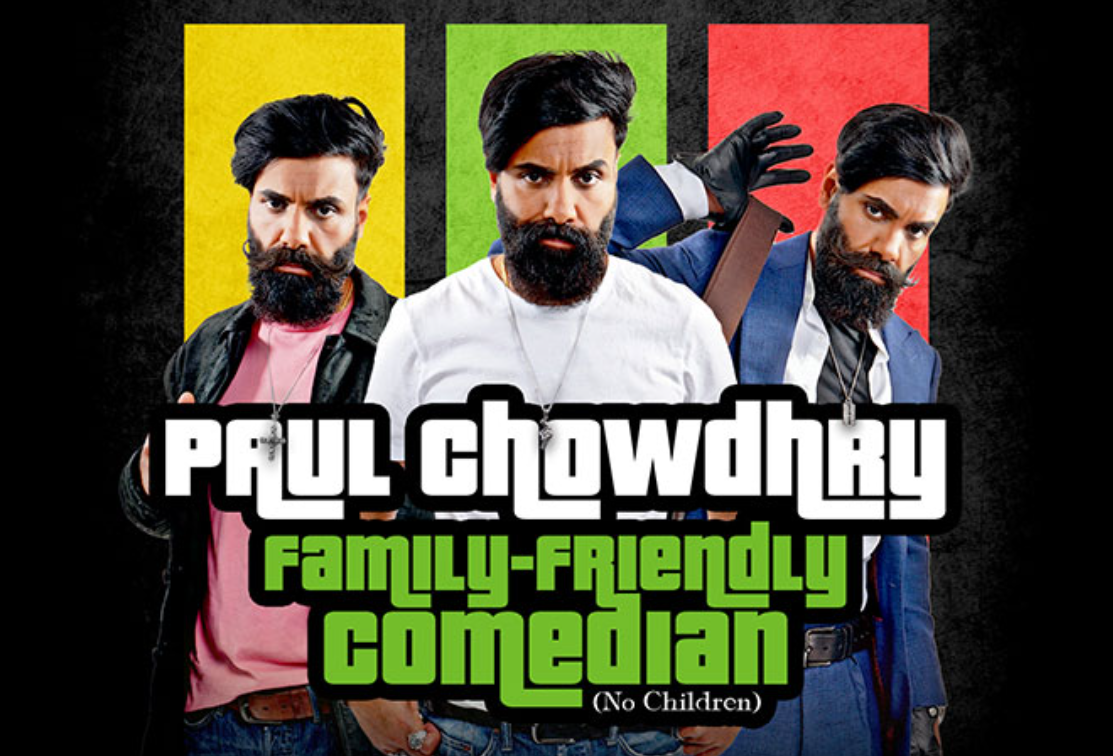 “Paul Chowdhry has become something of a big deal…you never get the sense that he’s selling out his background for cheap laughs, more that Chowdhry’s an equal-opportunity piss-taker…It’s an angle of attack that’s more common among US comics and Chowdhry does this stuff as slickly and effectively as anyone on the other side of the Atlantic.”

“the greatest British Asian comedian of all time”

Due to phenomenal demand as his sell out tour draws to a close with a second capacity performance at London’s Hammersmith Apollo this Thursday 9th December, multi-award-winning stand-up comedian, actor and writer Paul Chowdhry will be doubling the size of his brand-new stand-up tour, Family-Friendly Comedian (*No Children) for 2022 with 43 more dates nationwide.  Heading back out on the road from 2nd March at Liverpool’s Philharmonic Hall, Paul will be performing around the country until 28th May at the Bedford Corn Exchange.  Tickets go on general sale on Friday 10th December at 10am from www.paulchowdhry.com

The Family-Friendly Comedian tour follows Live Innit, his hit Amazon Prime stand-up special, which made the no.2 spot in Amazon Prime’s most watch Specials, and record-breaking live tour show, which had a thrice extended nationwide tour, seeing Paul perform five nights at the Hammersmith Apollo and become the first British-Asian stand-up to sell out the 10,000-seater Wembley Arena.

In 2021, Paul launched his podcast The Paul Chowdhry PudCast, produced by Global Entertainment, which sees Paul interviewing celebrities on life’s turning points, with a second series out now featuring well-known names including Greg Davies, Danny Wallace, and Lucy Beaumont. On TV, Paul recently made a cameo appearance alongside Helena Bonham Carter on Greg Davies’ new comedy series, The Cleaner (BBC One), as well as becoming the most featured celebrity guest ever on The Russell Howard Hour (Sky Max). He has also hosted Stand Up for the Week (Channel 4) and has twice headlined Live at the Apollo (BBC One/Two).  He was a much-loved contestant on the third series of multi-award-winning hit show Taskmaster (Channel 4/Dave) and has also regularly appeared on shows such as 8 Out Of 10 Cats (Channel 4), Sorry, I Didn’t Know (ITV) and more.  As an actor, he recently starred alongside Patrick Dempsey in the Sky Atlantic TV series Devils, soon to return for a second series, and featured in Disney’s Cruella alongside Emma Stone.  Paul is a prolific presence on social media, and his videos have been viewed over 50 million times on Facebook alone.

Family-Friendly Comedian runs from 2nd March til 28th May 2022