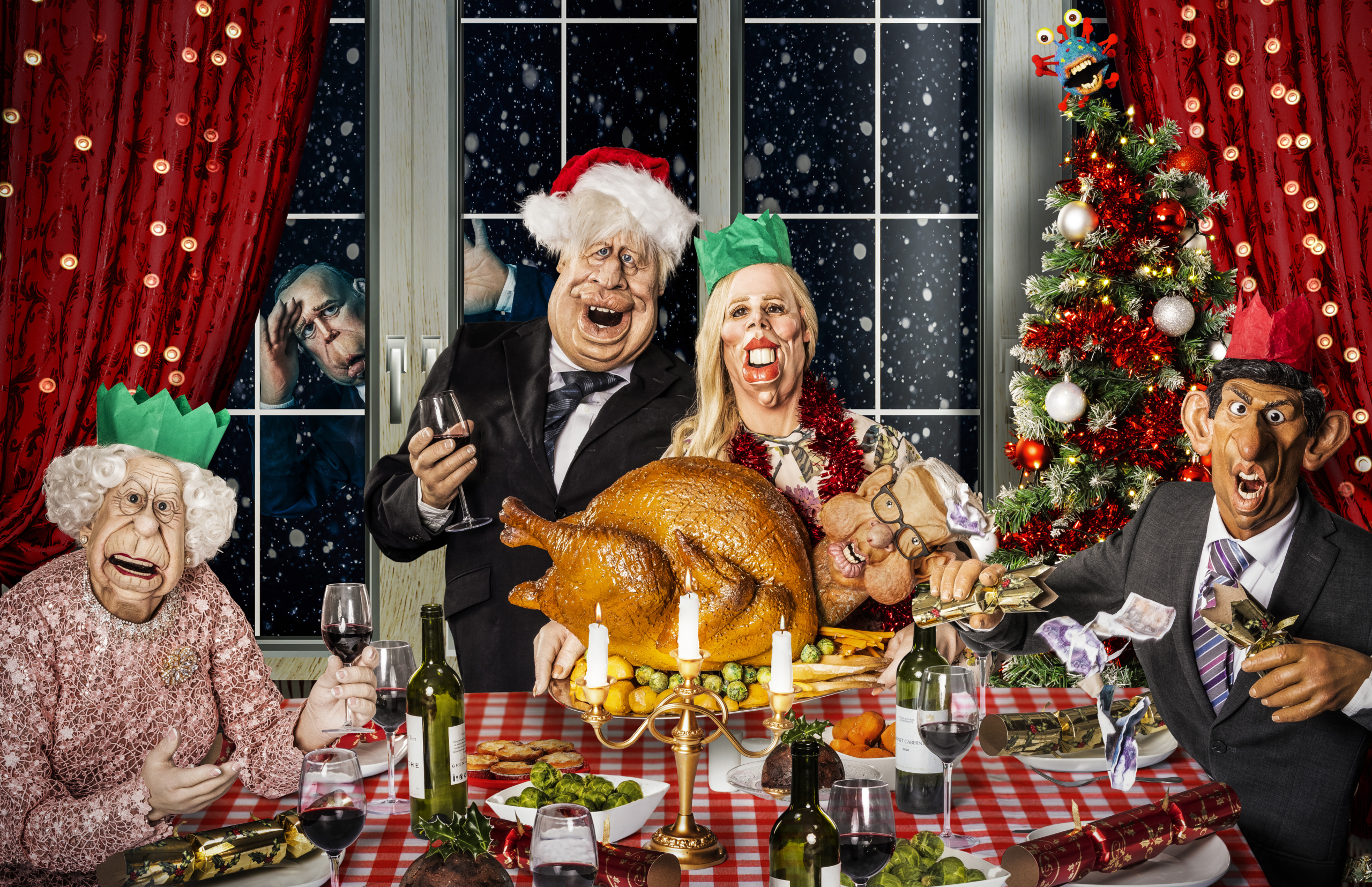 Advent events to go through Spitting Image’s legendary prism include: a shocking Christmas surprise for Prince Andrew; an ever-heroic Tom Cruise stepping up to save Christmas for Santa; who better to add a bit of flair to the Queen’s annual Christmas message than Phoebe Waller-Bridge; Keir Starmer finally springing into action for an oncoming Christmas lunch crisis with his (always law-abiding) vigilante alter-ego, Fox Man; while poor Rishi Sunak is visited by terrifying visions including of The Ghost of Tory Glory Past.

Spitting Image has delivered record subscribers for BritBox UK, the BBC and ITV created streaming platform. Across official social media channels, Spitting Image content has been hugely popular with over 200 million views globally and three No. 1 trending videos on YouTube.

Internationally, a bespoke German language version of the show has successfully launched in Germany with Der Spiegel hailing it as “really good” and news stories of far-right politicians from AfD considering legal action – Spitting Image: The Krauts’ Edition, includes the globally resonating content from the English language version (redubbed by Germany’s leading voice artists), with new topical local sketches (written by German comedy writers) – all filmed in the UK-based Spitting Image studio as close to transmission to ensure maximum topicality.  Elsewhere the debut drew the second-best channel audience figure in Finland for its time slot and was hailed by the leading Finnish newspaper as being, “As vicious and risqué as before” and successfully launched in Belgium with a 22% of total TV audience share, the show is a leading title for BritBox Australia, as well as seeing millions of views in the USA via YouTube.

The Spitting Image Christmas Special will TX on ITV in the Christmas schedule (day TBC) and will premiere in advance to BritBox UK subscribers on Thursday 2nd December.

“The reboot of Spitting Image has been a big hit since its return last autumn” ★★★★
Mark Wareham, The Mail on Sunday

“The puppets, made to be seen in the age of HD, are finished to an even high quality than they were in the show’s influential first run… they are quite extraordinary… the quality of the puppets and the impressions was outstanding.”
Dominic Maxwell, The Times

“there is life and mischief and deception and chaos… Matt Forde is doing his annoyingly good impression of the PM”
Matt Chorley, The Sunday Times

“when Spitting Image hits the mark, no satirical show eviscerates public figures with such a savage bite. And the impressions are amusingly spot-on, with a special shout out to Matt Forde’s Johnson.”
Vicki Power, The Daily Telegraph

“laughter helps in the face of fear, after all.”
Hollie Richardson, The Guardian / The Observer

“Resurrected to wide acclaim a year ago, the latest version’s grotesque creations are every bit as on the money as the scriptwriters and performers put current issues in the spotlight”
The Daily Star

“the updated Spitting Image continues to pull it off”
Eleanor Relf, The Sun

“The sheer breadth and detail of the craftsmanship is remarkable and the voiceover work pretty impressive… topical satire with the handbrake truly off is thin on the ground”
Gabriel Tate, The Times

Charlie Stayt: “It is funny… it is funny”
Naga Munchetty: “it is, and it’s supposed to be, and it is”
BBC One Breakfast

“sharpening its knives and getting stuck in”
The Guardian

“COMEDY OF THE WEEK…bet they’re sorry they’ve had to put the awful Trump colon into storage”
Jack Seale, Radio Times

“bitingly funny sketch show … no one is safe from a satirical roasting.”
Emily Baker, The i

“Sometimes laughter is the best medicine… Chaotic comedy at its very best!”
The Daily Mirror & The Daily Express

“it’s just as outrageous as ever”
Harry Fletcher, Metro

“Having survived the sheer horror of watching Donald Trump’s disembodied colon … No spoilers here, but there could possibly be another furore.”
Michael Hodges, Radio Times

“Reviews for series one of the new Spitting Image were almost universally positive.”
Mike Ward, The Daily Star

What the press said about series 1 of Spitting Image …

“lost none of its savagery or willingness to shock.” ★★★★
Mark Lawson, The Guardian

“with its Trumpian body part, hideously tweeting, one of the (horribly, brilliantly) unforgettable moments of this year’s TV.”
David Butcher, The Radio Times

“Throughout, the puppets and the impressions are pleasures in themselves… Spitting Image still has some fire lurking in its belly.” ★★★★
Dominic Maxwell, The Times

“a hit show… Spitting Image has provided some rare laughs… we need those puppets back soon.”
Ian Burrell, The i

“some sublime moments… You can happily enjoy all that creativity while you wait for the next joke to pull in.” ★★★★
Sean O’Grady, The Independent

“the much-missed satirical puppet show made a triumphant return” ★★★★
Mark Wareham, The Mail on Sunday

“the superb new Spitting Image series on BritBox… the sharpest, funniest and most ferocious take on events you’ll see all week.”
Eleanor Relf, The Sun

“The first series of BritBox’s Spitting Image revival went out with a bang… triumphant return as one of BritBox’s first original titles, with a whole host of new distorted puppets… the platform’s subscribers will undoubtedly miss the show’s weekly political parodies.”
Lauren Morris, Radio Times

“Trump’s puppet is spot-on, looking like a swollen tuna in a wig.”
James Jackson, The Times

“Better latex than never”
The Guardian

“it can go to places other comedies can’t”
Jack Seale, Radio Times

“… it’s finally here. One of the most influential British satirical shows of all time”
Henry Mance, Financial Times

“satirical sidesplitter… We need them kept on their toes now more than ever.”
Andy Halls, The Sun

“it’s strangely comforting that Spitting Image can return and still (as the Twitter furore and the USA’s hesitation to even screen it prove) have that power to wind folk right up! Welcome back, guys!”
★★★★
Jack Bottomley, Starburst Magazine

“has certainly got plenty of people laughing”
Total TV Guide

“I did watch the relaunched Spitting Image (BritBox), and some of it was quite funny. The satire of Dominic Cummings and Boris Johnson had a certain truth about it.”
David Mellor (quoted in The Times)

“The show has been a huge hit with viewers due to its hilarious portrayal of likes of British Prime Minister Boris Johnson, Michael Gove, Dominic Raab and Priti Patel.”
Lucy Murgatroyd, The Sun

“has truly found its moment by accurately caricaturing the physiognomical state of Donald Trump (candyflossed barnet, tan not so much Palm Beach as Nagasaki)… Long may its comedic genius be with us.”
Gavin Docherty, Daily Express

“its targets are once again gleaned from far and wide across the social spectrum… having merciless fun poked straight into them…  the buffoonery and entitlement of Trump and Johnson ceaselessly demolished.”
Brian Donaldson, The List

“To these eyes, it’s been a welcome revival: toothier than most TV comedy – bolstered by A-list writers and voice artists – with outstanding puppetcraft to marvel at”
Mike McCahill, Reader’s Digest

About BritBox UK:
BritBox is a digital video subscription service created by the BBC and ITV. The service brings the very best in past, present, and future British programming and award-winning content to viewers all in one place for £5.99 per month in HD. British TV boxsets from All 4 and British films from Film 4 are also available. The service includes high quality factual and entertainment content from Channel 5 plus original British comedies from Comedy Central UK. BritBox features the biggest collection of British content available on any streaming service, and brand new commissions for British production companies specifically created for BritBox. BritBox also offers expert curation and playlists that will enable viewers to easily find programmes they know and discover new favourites via web, mobile, tablet, connected TVs and streaming devices including Fire TV, Apple TV, Freesat & Chromecast. Content on BritBox can be downloaded and viewed offline where rights allow.