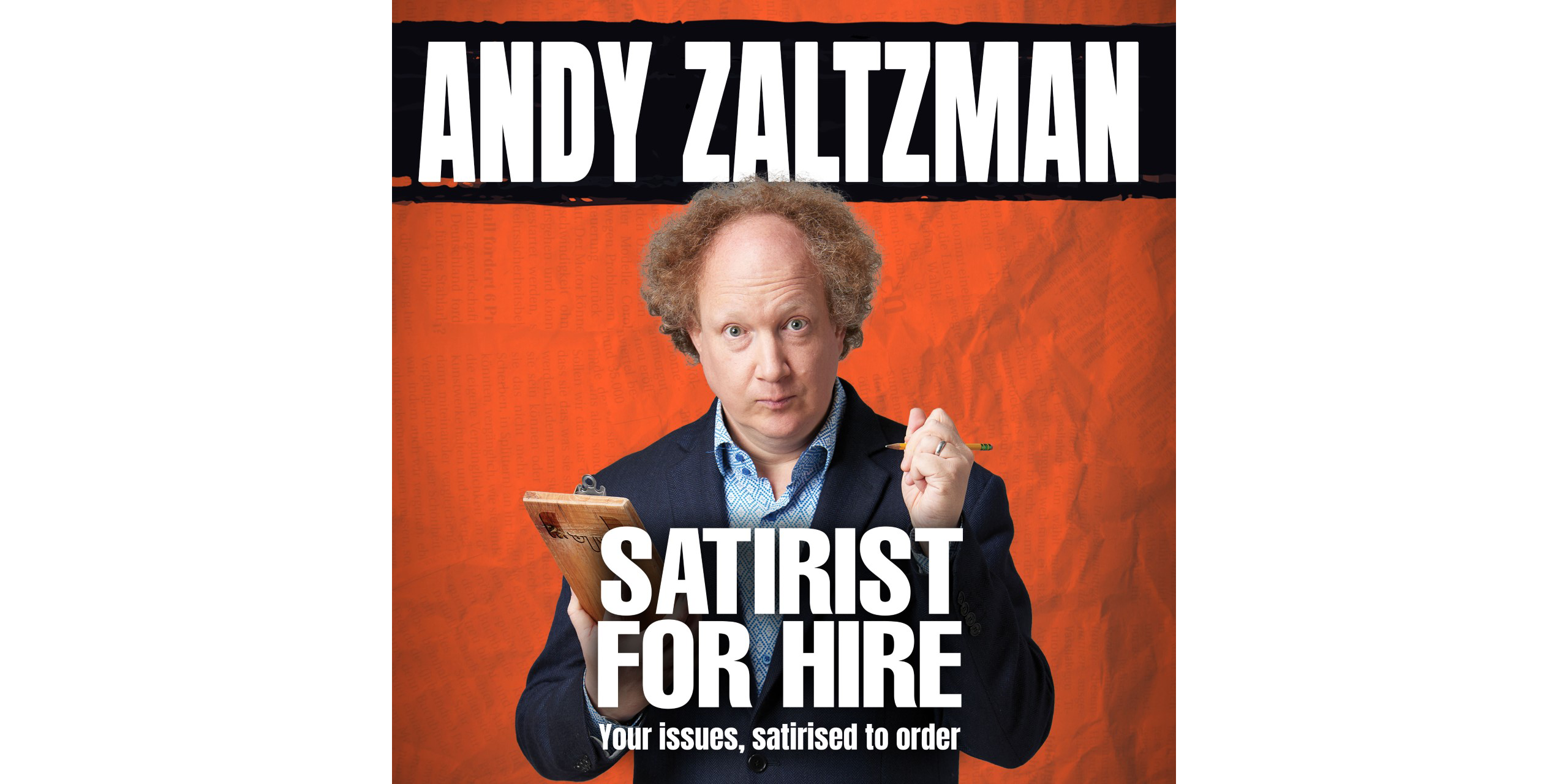 “Political satire at its most enjoyable”
★★★★ Dominic Maxwell, The Times

Andy Zaltzman, chair of The News Quiz, host of the global hit satirical podcast The Bugle, and Test Match Special statistician, returns with his unparalleled interactive stand-up show, inviting audience members to send subjects in ahead of the show for bespoke on-demand satire, concocted and delivered by one of Britain’s leading political comedians.

A show where no two performances are ever the same, in Satirist For Hire Andy offers his audience the chance to submit topics, issues and miscellaneous gripes for him to satirise to order.  He responds to these commissions – whether submitted in advance via email, or requested in person on the night before the show begins – with personalised, tailored routines.  He thus creates unique shows each night shaped by the requests/demands of the audience, encompassing everything from the biggest political stories of the day to pedantic personal peeves, delivered in Andy’s inimitable style that has revitalised The News Quiz since he became host in 2020, and helped The Bugle become one of the most successful satirical podcasts in the world.   (Satirical requests can be submitted to satirisethis@satiristforhire.com.)

A regular presence on Radio 4 over the last two decades, Andy became host of The News Quiz in 2020, bringing with him his distinctive cocktail of satirical incision, inventively-concocted analogies and frankly gratuitous cricket references in “an unheralded revolution” (Chortle). Andy collaborated with John Oliver from 2001, and together they presented The Bugle from its inception in 2007 until 2015, building up a large global following that continues to this day. The podcast was relaunched in September 2016, with Andy now joined by a revolving group of regular international co-hosts including The Problem With Apu star Hari Kondabolu (USA), Al Murray (UK) known for his alter-ego, The Pub Landlord, Alice Fraser (Aus) and The Mash Report’s Nish Kumar (UK).  Andy took The Bugle Live show on a successful 12-date American tour in 2019, which followed sell-out performances in the UK, Australia and Ireland.

Andy’s live stand-up has drawn audiences and critical acclaim around the UK and the world.  He has toured extensively in the UK and Ireland, as well as in North America, India, New Zealand and Australia, where he has appeared at the Melbourne International Comedy Festival.  He is also one of the few British comedians to have performed stand-up in Bangladesh.  He has been a regular at the Edinburgh Fringe throughout the millennium, building his reputation as one of the most inventive satirists in the world, and his annual Certifiable History review-of-the-year shows at the Soho Theatre have become a fixture in the satirical calendar.

Andy is the first stand-up comedian to double up as a cricket statistician for BBC Radio’s Test Match Special, joining the team in 2016, since when he has brought his wit, statistical expertise and obsessional lifelong fascination with cricket to one of the country’s best-loved broadcasting institutions.  His extensive TV, radio and podcast appearances include Unspun with Matt Forde (Dave), Russell Howard’s Good News (BBC Three), Politics Live (BBC Two), WTF with Marc Maron, John Oliver’s New York Stand-Up Show (Comedy Central), The Alternative Comedy Experience (Comedy Central), The Weekly with Charlie Pickering (ABC), 7 Day Sunday (BBC Radio 5 Live), and The Now Show (BBC Radio 4).   Alongside Anuvab Pal, he wrote and presented the BBC Radio 4 shows Empire-ical Evidence and Future Empire-fect, which addressed Britain’s past and future relationship with India.  In 2017, he presented My Life As… also on BBC Radio 4, in which he explored ancient philosophies such as Stoicism and Epicureanism.

In 2008 his book about the Credit Crunch, Does Anything Eat Bankers?, was published by Old Street Publishing.  He has also written for ESPNcricinfo, The Times, The i, and The Guardian.