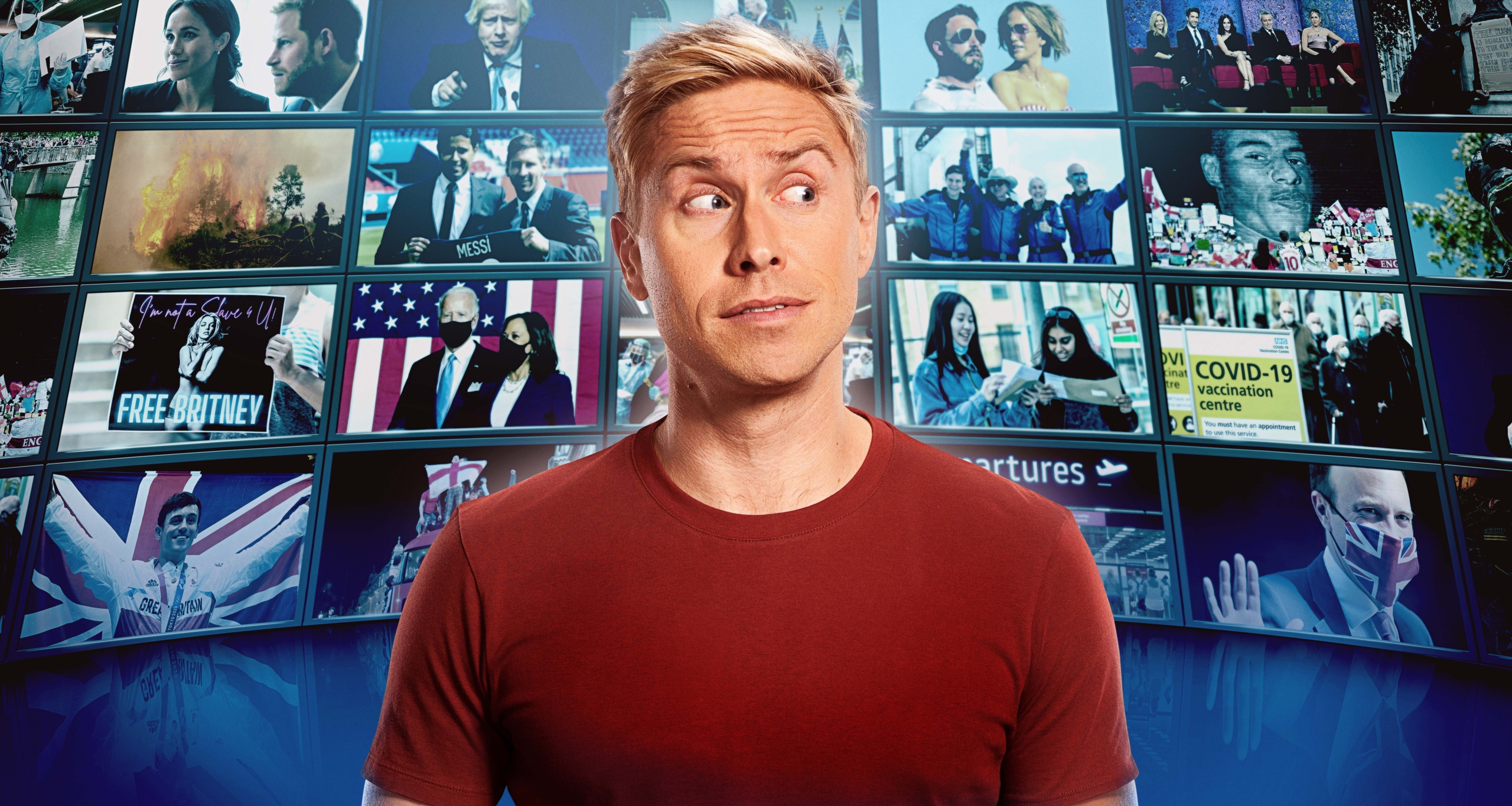 “Russell Howard has found his place with this satirical vehicle”

Russell Howard is back dissecting the news with his uniquely humorous perspective on the 14×60” fifth series of The Russell Howard Hour. Series four of the critically acclaimed topical comedy entertainment show attracted the biggest viewing figures since season one, which was the biggest new non-scripted entertainment show to land on Sky One since 2010.  A huge hit online, show content has been seen over 400 million times across social media since the show’s arrival.

Every episode is available to watch worldwide on Russell’s YouTube channel, with over 1.2 million subscribers, as well as being broadcast on Foxtel in Australia and TVNZ in New Zealand close to UK transmission

Since the global lockdown, Russell has been at the forefront of the live comedy scene. Russell became the first stand-up comedian from the Northern Hemisphere to perform in New Zealand and Australia and to open the doors at The Clapham Grand playing a series of work in progress gigs alongside some of his favourite performers. In response to the government’s step 4 roadmap delay, he moved the homecoming run of his world tour Respite from the Bristol Hippodrome to play seven socially distanced shows at Bristol City FC and prior to this gigged in various unconventional settings including car parks, lay-bys and woods. Following performing a sold-out and critically acclaimed UK arena run in Autumn 2019, Russell is currently playing his rescheduled (due to the coronavirus) second UK leg, including 5 Hammersmith Apollo dates, of his world tour. Russell’s third and biggest world tour to date, Respite, will in total take him to 79 cities across 24 countries in 5 continents.

Russell has over 6.7 million followers on social media.

For more information, please contact Victoria Wedderburn on 07557160139 or VWedderburn@avalonuk.com at Avalon or Alex Henderson on Alex.Henderson@sky.uk or Hannah Forde on Hannah.Forde@sky.uk at Sky

“His topical chat show has been a hit, securing fascinating celebs like Louis Theroux, Jon Ronson and Naomi Klein for extended chats”

“Howard’s riffs on life in 2021 that is the best material…Respite is, at times, Howard’s philosophy on life. Sort of like a self-help book for a flawed world slowly coming out of hibernation that would be a whole lot better – and sillier – if we followed his advice….has achieved global success… You would have to be pretty joyless yourself not to have fun at a Russell Howard gig. He will now take these life lessons around the world, offering togetherness, hope and a lot of silliness” ★★★★

“In 2021, what does gratitude sound like? Having witnessed it first-hand, I’d say it’s the sound of a 2000-seat auditorium lit up with laughter…Howard is one of the world’s biggest comedy stars. His flow is punchy and unstoppable”

“A triumphant return for Russell Howard: Covid jabs are all very well but laughter’s the second-best medicine out there right now” ★★★★

“Howard’s presence and manner are honed art forms, and his pacing is close to perfection. His set is tightly-packed, relentless, accelerating and energetic. But every word is crystal clear. This tightrope between rushing and dragging is rarely so well walked.” ★★★★

“In Respite he takes stock of the current chaos and concludes that we need more fun…. Howard says laughter brings people together. It certainly did last night.” ★★★★

“Russell Howard is at the top of his game, his elegantly crafted observational stand-up using cunningly spun callbacks and physical comedy to flirt with controversy, domesticity, politics, sex, and Calippo ice lollies”

Owen Richards, The i

“Arguably one of the funniest blokes to come out of the United Kingdom right now, you can rest assured Russell Howard will be keeping the laughs coming”