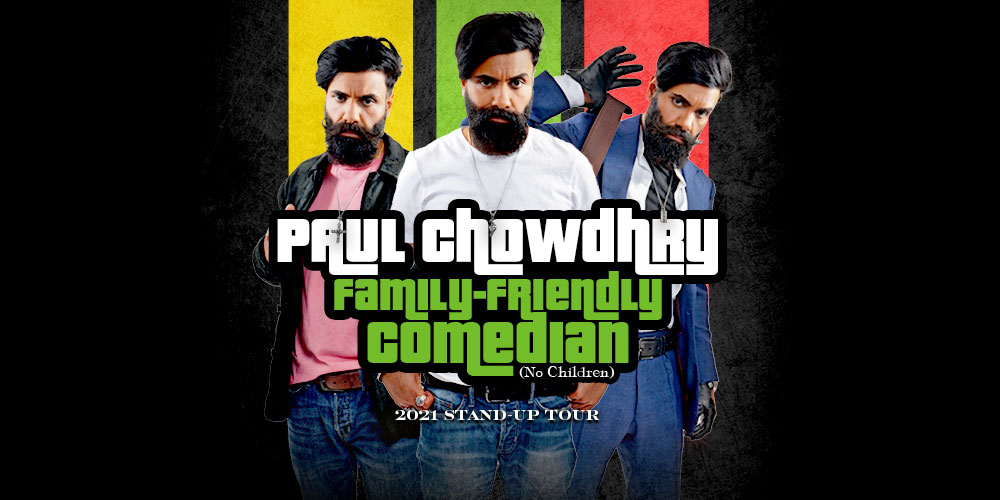 “It has seemed to happen without many people noticing, but Paul Chowdhry has become something of a big deal…you never get the sense that he’s selling out his background for cheap laughs, more that Chowdhry’s an equal-opportunity piss-taker…It’s an angle of attack that’s more common among US comics and Chowdhry does this stuff as slickly and effectively as anyone on the other side of the Atlantic.”

“the greatest British Asian comedian of all time”

Multi-award-winning stand-up comedian, actor and writer Paul Chowdhry will embark on a brand-new stand-up tour this autumn, Family-Friendly Comedian*. This follows hot on the heels of Live Innit, his hit Amazon Prime stand-up special and record-breaking live tour show, which had a thrice extended nationwide tour, seeing Paul perform five nights at the Hammersmith Apollo and become the first British-Asian stand-up to sell out the 10,000 seater Wembley Arena.  Family-Friendly Comedian kicks off on 19th October at Hayes Beck Theatre, includes a night at London’s Hammersmith Apollo on 30th October and finishes at Nottingham’s Royal Concert Hall on 16th December. To support and promote regional comedy, Paul’s opening act in each city he performs in will be local to that area, giving them a once in a lifetime opportunity to perform next to a living legend.  Tickets go on general sale on Friday 10th September at 10am from www.paulchowdhry.com

After barely surviving the pandemic and with two pent-up years of killer material, Paul tackles the UK’s handling of COVID-19, why the rules of six only worked for white people, England football fans, Tom Cruise’s helicopter and Naked Attraction in the Middle East.

Paul said: ‘We’re living in troubled times, so once again I must put my cape on and save humanity. It’ll be Family-Friendly but not in a Michael Jackson kind of way. See you on tour.’

Earlier this year Paul launched his brand-new podcast produced by Global Entertainment The Paul Chowdhry PudCast, interviewing celebrities on life’s turning points with guests including Russell Howard, London Hughes and Stewart Lee. As an actor, he recently starred alongside Patrick Dempsey in the 10-part Sky Atlantic TV series Devils, soon to return for a second series, and featured in Disney’s Cruella alongside Emma Stone.  Paul is a prolific presence on social media, and his videos have been viewed over 50 million times on Facebook alone. On TV, Paul hosted Stand Up for the Week (Channel 4) and has twice headlined Live at the Apollo (BBC One/Two).  He was a much-loved contestant on the third series of multi-award-winning hit show Taskmaster (Channel 4/Dave), appeared four times on Channel 4’s Comedy Gala, alongside comics including Lee Evans and Michael McIntyre, and has also regularly appeared on shows such as The Russell Howard Hour (Sky One), 8 Out Of 10 Cats (Channel 4), Sorry, I Didn’t Know (ITV) and more.