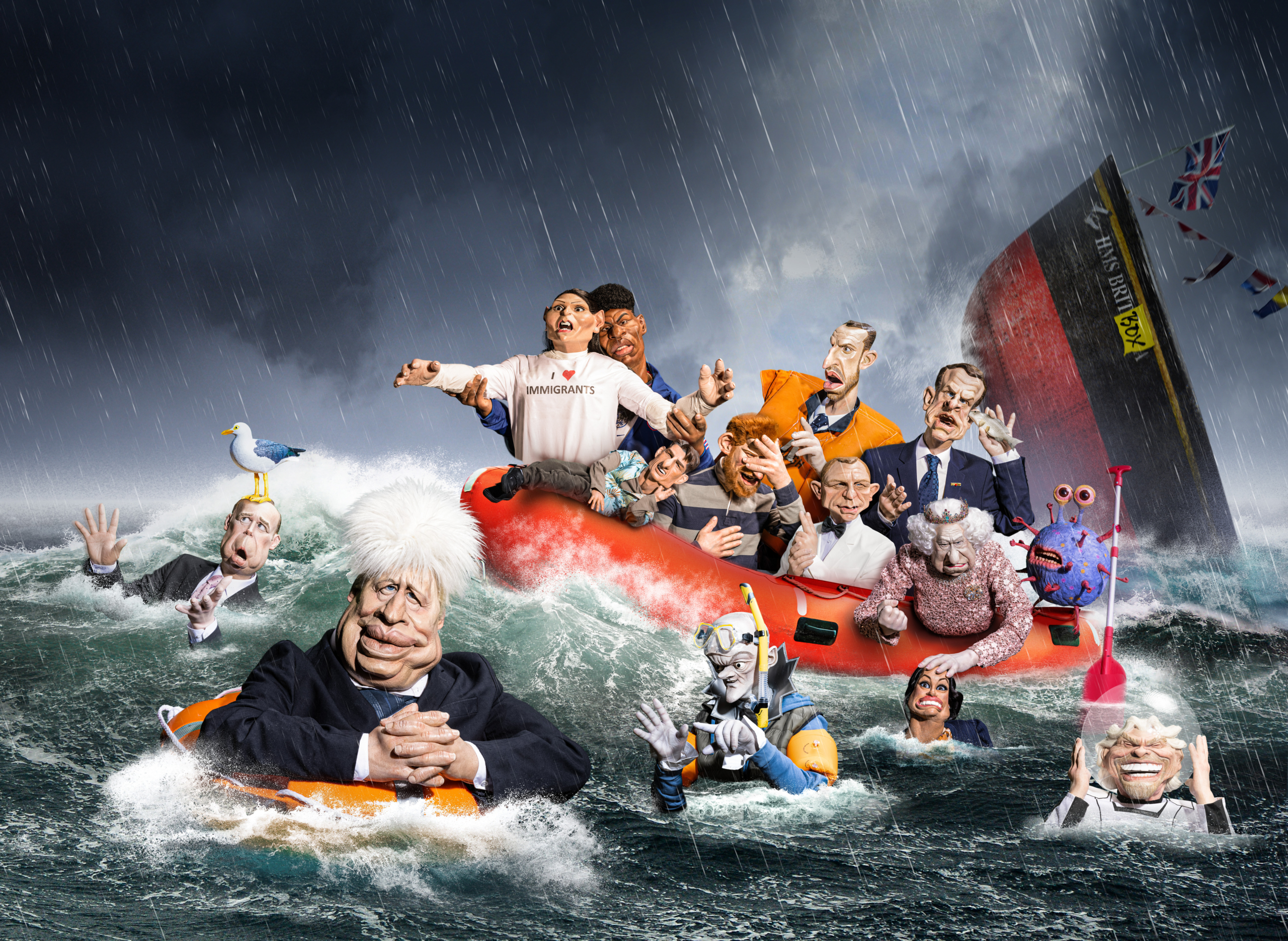 With widespread social media acclaim, notable commentators including: Lewis Goodall (BBC Newsnight) said, “Was so worried I’d be disappointed or it’d be lame. Thank God, it’s anything but. It’s really funny”; Henry Mance (The Financial Times) cited a favourite sketch as a “nice example of how satire doesn’t have to lean left”; Tim Stanley (Historian/The Daily Telegraph) declared that he was “Loving Spitting Image so far”; Keith Humphreys (Washington Post/Professor at Stanford University) said, “The new Spitting Image series is funny because it follows the first rule of political satire: Be unspeakably rude to everyone”; and Gary Lineker shared the Piers Morgan puppet while commenting, “The first time I can recall a Spitting Image puppet to be actually quite flattering.”

Spitting Image has delivered record subscribers for BritBox UK, the BBC and ITV created streaming platform, and a 4.4 million audience for ITV with a one-off US Election Special, the highest Saturday night ratings at that time in four years (one of ITV’s biggest Saturday night ABC1 audiences of 2020).  Across official social media channels, Spitting Image content has been hugely popular with over 200 million views globally and three No. 1 trending videos on YouTube.

Internationally, it was also announced earlier this year that a bespoke German language version would be made for Sky Germany “Spitting Image: The Krauts’ Edition”, including the globally resonating content from the English language version (redubbed by Germany’s leading voice artists), with new topical local sketches (written by German comedy writers) added – all filmed in the UK-based Spitting Image studio as close to transmission to ensure maximum topicality.  The debut of the first series drew the second-best channel audience figure in Finland for its time slot and was hailed by the leading Finnish newspaper as being, “As vicious and risqué as before” and successfully launched in Belgium with a 22% of total TV audience share, as well as seeing millions of views in the USA via YouTube.

What the press said about series 1…
“lost none of its savagery or willingness to shock.” ★★★★
Mark Lawson, The Guardian

“Throughout, the puppets and the impressions are pleasures in themselves… Spitting Image still has some fire lurking in its belly.” ★★★★
Dominic Maxwell, The Times

“with its Trumpian body part, hideously tweeting, one of the (horribly, brilliantly) unforgettable moments of this year’s TV.”
David Butcher, The Radio Times

“a hit show… Spitting Image has provided some rare laughs… we need those puppets back soon.”
Ian Burrell, The i

“some sublime moments… You can happily enjoy all that creativity while you wait for the next joke to pull in.” ★★★★
Sean O’Grady, The Independent

“the much-missed satirical puppet show made a triumphant return” ★★★★
Mark Wareham, The Mail on Sunday

“the superb new Spitting Image series on BritBox… the sharpest, funniest and most ferocious take on events you’ll see all week.”
Eleanor Relf, The Sun

“The first series of BritBox’s Spitting Image revival went out with a bang… triumphant return as one of BritBox’s first original titles, with a whole host of new distorted puppets… the platform’s subscribers will undoubtedly miss the show’s weekly political parodies.”
Lauren Morris, Radio Times

“Trump’s puppet is spot-on, looking like a swollen tuna in a wig.”
James Jackson, The Times

“Better latex than never”
The Guardian

“it can go to places other comedies can’t”
Jack Seale, Radio Times

“… it’s finally here. One of the most influential British satirical shows of all time”
Henry Mance, Financial Times

“satirical sidesplitter… We need them kept on their toes now more than ever.”
Andy Halls, The Sun

“it’s strangely comforting that Spitting Image can return and still (as the Twitter furore and the USA’s hesitation to even screen it prove) have that power to wind folk right up! Welcome back, guys!”
★★★★
Jack Bottomley, Starburst Magazine

“has certainly got plenty of people laughing”
Total TV Guide

“I did watch the relaunched Spitting Image (BritBox), and some of it was quite funny. The satire of Dominic Cummings and Boris Johnson had a certain truth about it.”
David Mellor (quoted in The Times)

“The show has been a huge hit with viewers due to its hilarious portrayal of likes of British Prime Minister Boris Johnson, Michael Gove, Dominic Raab and Priti Patel.”
Lucy Murgatroyd, The Sun

“has truly found its moment by accurately caricaturing the physiognomical state of Donald Trump (candyflossed barnet, tan not so much Palm Beach as Nagasaki)… Long may its comedic genius be with us.”
Gavin Docherty, Daily Express

“its targets are once again gleaned from far and wide across the social spectrum… having merciless fun poked straight into them…  the buffoonery and entitlement of Trump and Johnson ceaselessly demolished.”
Brian Donaldson, The List

“To these eyes, it’s been a welcome revival: toothier than most TV comedy – bolstered by A-list writers and voice artists – with outstanding puppetcraft to marvel at”
Mike McCahill, Reader’s Digest

“The new Spitting Image series is funny because it follows the first rule of political satire: Be unspeakably rude to everyone.”
Keith Humphreys
(Journalist at Washington Post/Professor at Stanford University)

“The new Spitting Image puppet of Dominic ‘I was only testing my eyesight’ Cummings is sublime.”
Piers Morgan

“The first time I can recall a Spitting Image puppet [shares Piers Morgan puppet] to be actually quite flattering.”
Gary Lineke

“Politicians and celebrities will be cringing behind the sofa. Spitting Image is back and as unforgiving as ever.”
Kay Burley

“The new Spitting Image on BritBox had a properly funny piss-take of Klopp last weekend BTW. Taking the piss out of his humility and self-deprecation. With a really good impression. Proper satire. He would love it…This was the first Spitting Image (new era) take on Klopp. Which was … spot on… Trump absolutely grotesque: which is accurate. The arsehole tweeting is just horrible, and funny. Priti Patel and Gove too. Boris J an idiot; Cummings a wacko alien. Biden a lame duck. Starmer struggling for relevance. All-round satire”
Nick Harris
(The Mail on Sunday/SportingIntelligence.com)

“Unfortunately, it’ll be hard for Americans to watch ‘Spitting Image’.  The television network NBC has backed out of broadcasting the series at the last moment, apparently for fear of offending people. Which is of course the point of the show.”
John Simpson
(BBC News)

“am not going to miss the Spitting Image guest for anything!”
Tim Levell
(Programme Director at Times Radio

“Just watched first ep of Spitting Image – The Guardian gives it 4 stars I give it 5 !! Absolutely hilarious and of course hugely offensive”
Derren Litten
(Creator of Benidorm)

“In case you’ve not realised yet, the new Spitting Image is brilliant. Annoying all the right people. It lampoons Trump and Pence and Boris sure, that’s easy. But also Ardern, Starmer and Harris. That’s less easy, and they’re even funnier.”
Rupert Beale
(Group Leader, Cell Biology of Infection at The Francis Crick Institute)

“Back to its absurd, irreverent and deliciously crude best. So pleased to have it back.”
Adam Fowler
(TV Reporter)

BritBox is a digital video subscription service created by the BBC and ITV. The service brings the very best in past, present and future British programming and award-winning content to viewers all in one place for £5.99 per month in HD. British TV boxsets from All 4 and British films from Film 4 are also available. The service includes high quality factual and entertainment content from Channel 5 plus original British comedies from Comedy Central UK. BritBox features the biggest collection of British content available on any streaming service, and brand new commissions for British production companies specifically created for BritBox. BritBox also offers expert curation and playlists that will enable viewers to easily find programmes they know and discover new favourites via web, mobile, tablet, connected TVs and streaming devices including Fire TV, Apple TV, Freesat & Chromecast. Content on BritBox can be downloaded and viewed offline where rights allow.