BRING ME THE HEAD OF THE TASKMASTER 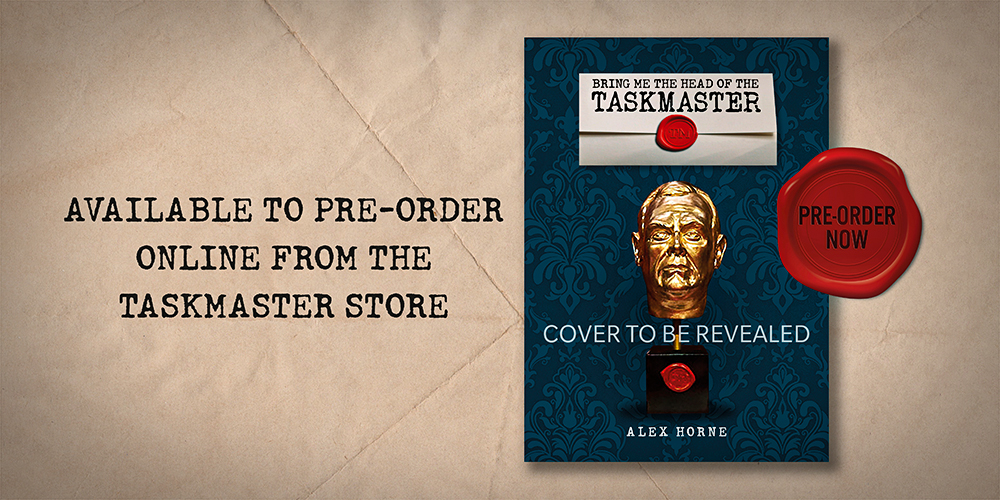 Published in hardback by Ebury Spotlight

101 NEXT LEVEL TASKS (AND CLUES) THAT WILL LEAD ONE ORDINARY PERSON TO SOME EXTRAORDINARY TASKMASTER TREASURE…
FASTEST WINS. YOUR ADVENTURE STARTS NOW.

Welcome to the race. It’s not a race against the clock, that would be far easier. Clocks can be fast, but clocks never win races. It’s nearly always humans. Sometimes horses. Occasionally dogs.

This is a race against your fellow Taskmaster players. You are competing against everyone else who is reading this book.
All you’ve got to do is find The Taskmaster’s Head first.

This is a race with many twists and turns, that requires very little running, much sideways thinking, and quite a lot of patience.

Thankfully, there will be a shedload of tasks along the way to distract you. There are tasks to do on your own, tasks to do with your family and friends, and tasks for bigger groups too. Some of these distractions may slow you down, but some may help you get where you need to be. As always, enjoy the tasks, do your best, make good choices.

This book requires its readers to think, draw, jump and act outside of the box, as they race to uncover the Head of the Taskmaster. It is to books what Taskmaster is to TV – uniquely original and deviously addictive.

Taskmaster is a BAFTA winning and International Emmy nominated comedy game show, originally created by Alex Horne and produced by Avalon. Greg Davies stars as the all-powerful “Taskmaster” who, with the help of his loyal assistant Horne, sets out to test the wiles, wit and wisdom of five comedians through a series of strange and surreal challenges  – from creating the biggest mess possible, to disguising a coconut as a businessman – in what is the most hard-fought and ridiculous comedy entertainment format on TV.

The show attracts huge ratings in its prime-time Channel 4 slot. The publication of this book will coincide with its 12th series, airing later this year.

Award-winning comedian Alex Horne is the creator and co-host of the BAFTA-winning hit TV show Taskmaster. UK lockdown saw Alex devise the hugely successful interactive Home Tasking on the Taskmaster YouTube channel, setting Taskmaster-style tasks online, inviting households worldwide to participate on Twitter via the hashtag #HomeTasking where it was watched in 125 countries, with viewers ranging from the US to the UK and from Moldova to Mongolia.

He is also the creator and frontman of The Horne Section, a six-piece band of musicians who give musical comedy a unique twist. The band’s TV credits include being the in-house band on BBC One’s Peter Crouch: Save Our Summer and the upcoming Crouchy’s Year Late Euros, which Horne also co-hosted, and Channel 4’s The Last Leg including Last Leg Christmas Special and Last Leg: The Last Leg of the Year. They have featured in Dictionary Corner on 8 Out of 10 Cats Does Countdown (Channel 4), The Royal Variety Performance 2018 (ITV), as well as the 2 hour special The Horne Section Television Programme on UKTV’s Dave filmed at the London Palladium, while the band have previously hosted three series of Alex Horne Presents The Horne Section on BBC Radio 4. Their iTunes chart topping podcast The Horne Section Podcast is Shortlists’ Best Comedy Podcast.

As a solo act, he has been nominated for the Foster’s Edinburgh Comedy Award and the Perrier Newcomer Award. He has released two books based on his critically-acclaimed Edinburgh shows, Birdwatching and Wordwatching, along with the first Taskmaster Book; 200 Extraordinaary tasks for Ordinary People which has sold over 150,000 copies to date.

The book is available for pre-order, on the Taskmaster store.