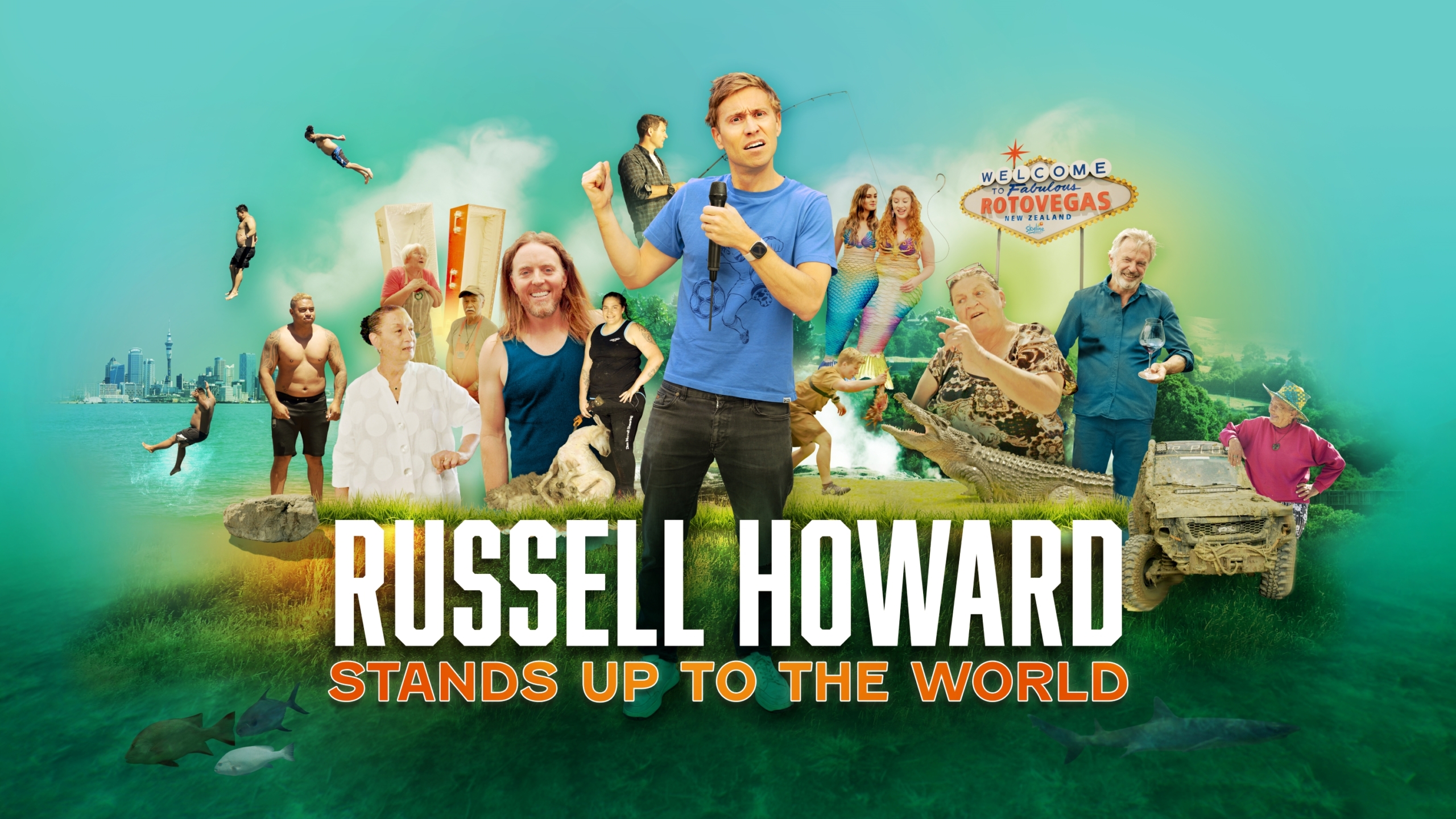 17th May 2021 –  After being invited to perform in Australia and New Zealand, Russell takes a trip to explore these distant lands where Covid has been kerbed in this brand new 3 x 60” series premiering on Sky and streaming service NOW on 31st May at 9pm. All three episodes will be available on demand.

In each location Russell notices the subtle and delightful eccentricities of each country and presents them back through his stand-up performances across the land.  Experiencing the unique local humour (and heckling) of the locals first-hand and revelling in our similarities and differences.

Whilst filming the travelogue, Russell became the first international comedian to perform in New Zealand and Australia since the global lockdown. Following the Australasian legs and a sold-out and critically-acclaimed UK arena run in Autumn 2019 for his world tour Respite, Russell is set to perform the second UK leg, including 5 Hammersmith Apollo and 7 hometown venue Bristol Hippodrome shows, from 22nd June to the 29th August 2021.  Respite will in total take Russell to 77 cities across 24 countries in 5 continents.

Russell was most recently on our screens with the fourth season of The Russell Howard Hour, attracting the largest viewing figures since season one, which was the biggest new non-scripted entertainment show to land on Sky One since 2010 and resulted in a recommission for a further two seasons. A huge hit online, content has been seen over 400 million times across social media since the show’s arrival. The fifth, 14 x 60’ season, will see Russell continue to offer his acclaimed satirical take on global news, politics and stories dominating the cultural zeitgeist on Sky One later this year. Every episode is available to watch globally via Russell Howard’s YouTube Channel which has over one million subscribers.

“In 2021, what does gratitude sound like? Having witnessed it firsthand, I’d say it’s the sound of a 2000-seat auditorium lit up with laughter…Howard is one of the world’s biggest comedy stars. His flow is punchy and unstoppable”

“Howard’s presence and manner are honed art forms, and his pacing is close to perfection. His set is tightly-packed, relentless, accelerating and energetic. But every word is crystal clear. This tightrope between rushing and dragging is rarely so well walked.” ★★★★

“Arguably one of the funniest blokes to come out of the United Kingdom right now, you can rest assured Russell Howard will be keeping the laughs coming”

Sky is Europe’s leading media and entertainment company and is proud to be part of the Comcast group. Across six countries, we connect our 24 million customers to the best entertainment, sports, news, arts and to our own award-winning original content.

Our technology, including the market leading Sky Q, connects people to everything they love – with entertainment from Sky TV, Netflix, Disney+, Amazon Prime Video and BBC iPlayer, and apps like Spotify, YouTube, BBC Sounds, Highbrow, Fiit, and more, in one place, easy. Our streaming service, NOW, brings viewers all the enjoyment of Sky with the flexibility of a contract-free service.

Building on the success of Sky Originals like Chernobyl, Bulletproof and Brassic, we are doubling our investment in original content by 2024 through Sky Studios. Sky News provides impartial and trustworthy journalism for free, while Sky Arts, the UK’s only dedicated free-to-air arts channel, makes the arts accessible for everyone. Our new TV and movie studio, Sky Studios Elstree, which will open in 2022, is expected to create over 2,000 new jobs and generate an additional £3 billion of production investment in the UK over the first five years.

We believe that we can be a force for good in the communities in which we operate. We’re committed to being Europe’s first net zero carbon entertainment company by 2030 and we’re proud to be a Principal Partner and Media Partner of COP26. We take pride in our approach to diversity and inclusion: we’ve been recognised by The Times and Stonewall for our commitment to diversity and we’ve set ambitious 2025 targets to continue to increase diversity and representation. We’re also committed to investing £30million across our markets over three years to improve our approach to diversity and inclusion, and to tackle racial injustice.

NOW is a leading UK streaming service, giving you the best TV, box sets, movies, sports and kids entertainment whenever, and wherever, you want it. Pick from the range of content passes including Entertainment, Sky Cinema, Sky Sports, Kids and reality TV with hayu.

You can stream content to watch through the NOW app, available on over 60 devices including the NOW Smart Stick and Smart Box and even download your favourite shows and movies to watch on the go.

NOW is the home of the best new and original British comedies, Oscar, BAFTA, and Emmy award winning dramas, Sky originals and movies. NOW customers can enjoy over 30 new movies every month and Sky Atlantic shows, without a contract.

Sports fans can enjoy all the action across all 11 Sky Sports channels through day, week or month passes.