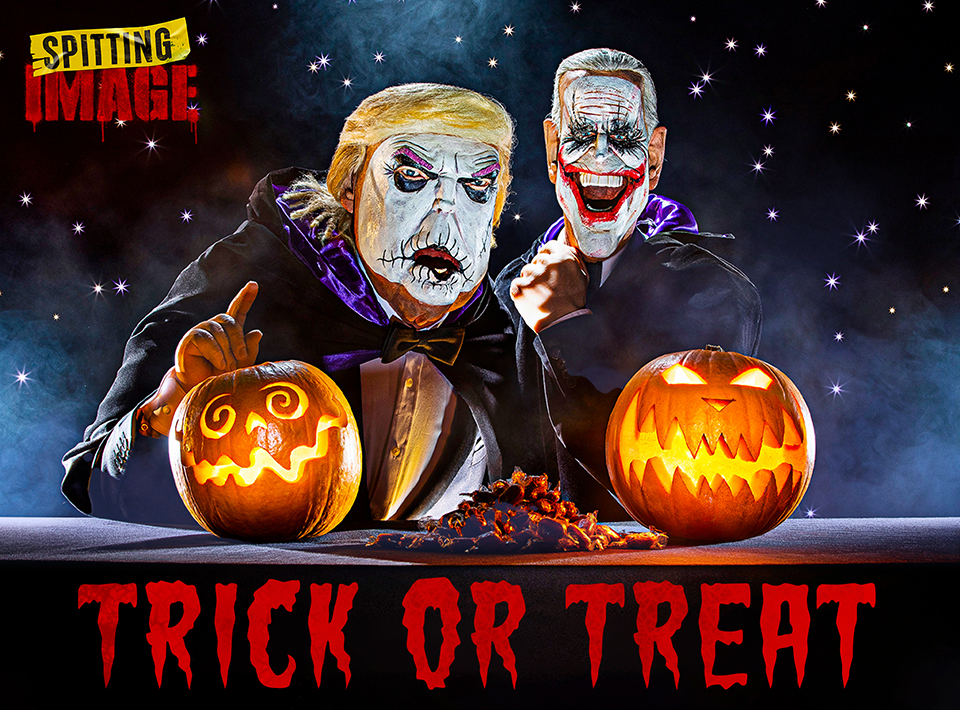 “with its Trumpian body part, hideously tweeting, one of the (horribly, brilliantly) unforgettable moments of this year’s TV.”
David Butcher, The Radio Times (UK)

“lost none of its savagery or willingness to shock… there are, blessedly, nine more weeks of this to come.” ★★★★
Mark Lawson, The Guardian (UK)

“Throughout, the puppets and the impressions are pleasures in themselves… … this opening salvo suggests that Spitting Image still has some fire lurking in its belly.” ★★★★
Dominic Maxwell, The Times (UK)

“so far its resurrection is pleasingly familiar to those who remember the original… they haven’t, despite early reports, held back on the viciousness… in general, a B-plus”
Euan Ferguson, The Observer (UK)

“the much-missed satirical puppet show made a triumphant return” ★★★★
Mark Wareham, The Mail on Sunday (UK)

Los Angeles – 28 October – It was announced today that the Spitting Image: US Election Special, also starring Mark Zuckerberg and Jeff Bezos, will be made available on the show’s official YouTube channel to US audiences.  The show is currently making a critically acclaimed return after 24 years off screen in the UK.  In 1987, following the success of three NBC one-off specials, the New York Times said, “The puppets, designed by Peter Fluck and Roger Law, are marvels of exaggerated likenesses… The show is best at its most pointed. Will American audiences, a bit sensitive about being kidded, take to this form of irreverence? NBC ran two editions of ”Spitting Image” last summer in trial runs, and both beat the competition on the other networks. That can mean only one thing: Look for more of the same, soon.”

Landing exclusively on YouTube on Friday 30 October (5pm PT and 8pm ET), US viewers will have a chance to watch the uncompromising, fast-turnaround and uniquely British satirical take on global events covering the key moments and circus during the build-up to the 2020 US Election.  Spitting Image co-creator Roger Law returned to head up the show’s creative team, while multi-award-winner Jeff Westbrook (The Simpsons, Futurama) is the Showrunner, leading the writing team.

Global social media stats by episode 4 have seen Spitting Image official content reach over 118 million people, with over 28 million views of content across official social media channels and 3 No. 1 trending videos on YouTube. With continued critical acclaim, Spitting Image has been credited for delivering record new subscribers for BritBox in the UK (the BBC and ITV created streaming platform), while also highly successful on TV internationally, the debut of this series drew the second best channel audience figure in Finland for its time slot and was hailed by the leading Finnish newspaper as being, “As vicious and risqué as before”, as well as successfully launching in Belgium with an impressive 22% of total TV audience share.  When the first episode made a limited 24-hour debut in the USA over Facebook Premier, the show saw over 2 million US-only views of content across official social media channels and over 1 million views of a single clip featuring Lewis Hamilton.

What the press have said about the return continued…

“congratulations on Spitting Image, we’ve just been watching it this morning, we could barely do the first half hour of the show, I mean seriously… thanks goodness it’s back… it’s as fresh as a daisy this one … it’s hilarious”
Chris Evans, Virgin Radio (UK)

“I watched some of this last night, with some trepidation having loved it in my youth, but I actually really enjoyed it and laughed more than I thought I would… I very much enjoyed the New Zealand Prime Minister Jacinda Arden as the practically perfect Mary Poppins”
Rachel Burden, BBC Radio 4 (UK)

“The first thing to say about the revived Spitting Image is that it works. This will come as a relief to those, including your reviewer, for whom the original show was a vital part of the 1980s and 90s”
Robert Hutton, The Critic (UK)

“it certainly did not disappoint… it was cracking, I loved it, I highly recommend people watching it… absolutely brilliant”
Ayesha Hazarika, Times Radio (UK)

“the use of on-screen tweets an effective way of keeping things as last-minute as possible. If that kind of ingenuity, along with the signature grotesque caricatures its talented puppetry department keep producing, can be maintained, there’s a chance this update could be as effective – or at least as offensive – as it was several decades ago.”
Ivan Radford, VODzilla (UK)

“its targets are once again gleaned from far and wide across the social spectrum… having merciless fun poked straight into them…  the buffoonery and entitlement of Trump and Johnson ceaselessly demolished. And fair play to the producers who probably thought this opening episode was firmly in the can by Thursday night, only for a new Covid statistic to send the world into a tailspin by Friday morning. So, there was just time for a cheeky quarantine gag about Melania and her husband’s tweeting colon to be squeezed in.”
Brian Donaldson, The List (UK)

“The puppets are as brilliant as always”
Gerard Gilbert, The I (UK)

“I really enjoyed it again this time around… I love the look of the puppets, I like the fact that there’s still a lot of savagery there, they’re pretty merciless”
Fiona Shepherd, The Scotsman (on BBC Radio Scotland UK)

“some of it was very funny”
Bruce Dessau, Beyond The Joke/Evening Standard (UK)

“TV GOLD: The Boris sat-nav sketch and Keir Starmer’s Shadow Cabinet/donkey sanctuary eeh-awing down the phone to him”
Ally Ross, The Sun (UK)