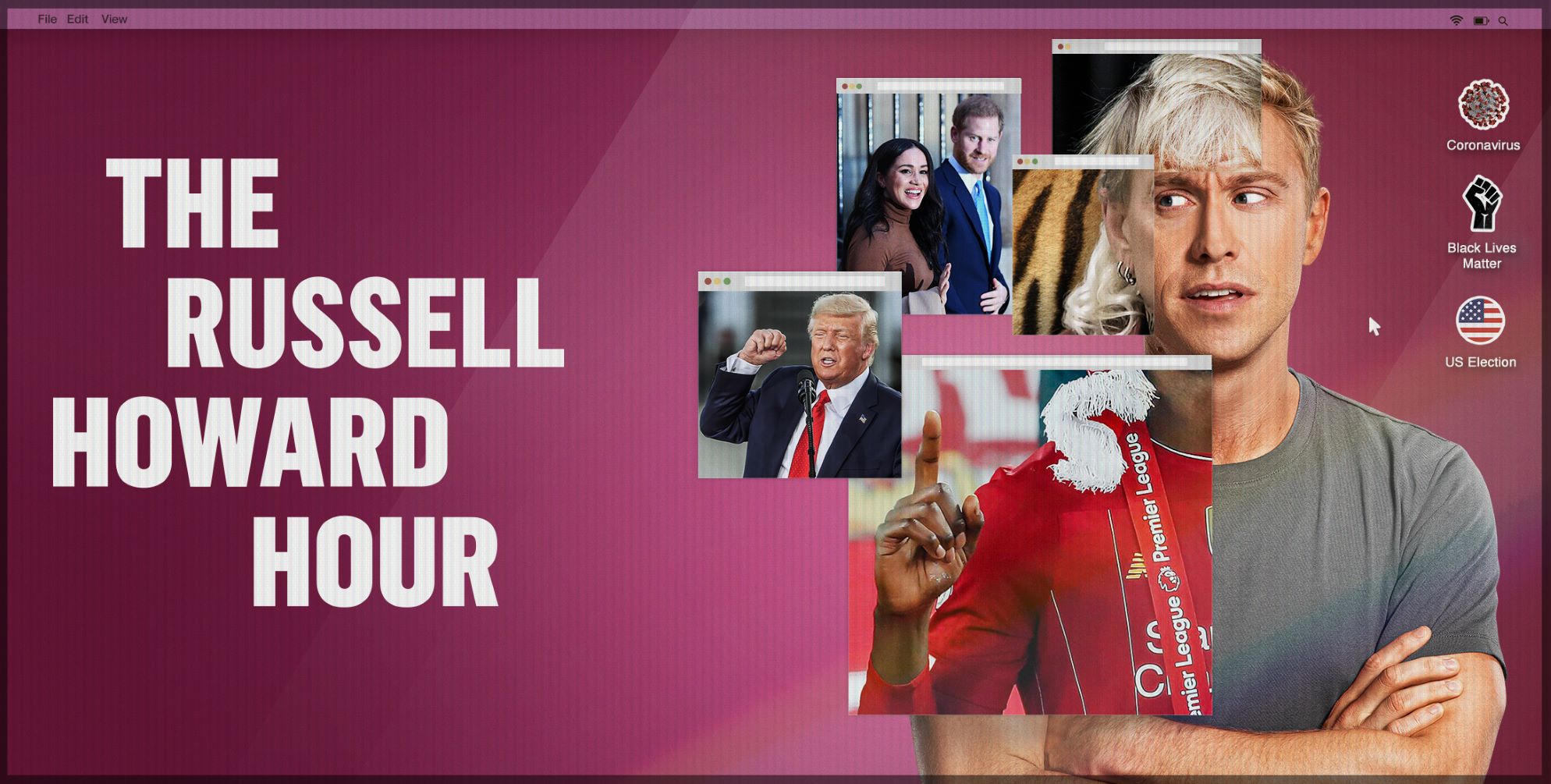 “His topical chat show has been a hit, securing fascinating celebs like Louis Theroux, Jon Ronson and Naomi Klein for extended chats” Graeme Virtue, The Guardian

“Altogether more politicised and hard-hitting….It was a treat to find Howard showing so much bite… it’s not often you get such spiky satire on Sky1…Howard and his Hour should be applauded.”  Michael Hogan, The Daily Telegraph

We will see the return of Good Deeds, championing the nation’s spirit of generosity, plus intimate live performances from comedians and musicians. For the first time, in a new strand titled Life Lessons, Russell will be joined by well-known faces and emerging talent to tackle life’s biggest questions head on.

Every episode will be available to watch worldwide on Russell’s YouTube channel, which has over one million subscribers and will be broadcast in Australia and New Zealand close to UK transmission on Sky One and NOW TV.

During lockdown, Russell was on our screens presenting a new Sky One show, Russell Howard’s Home Time, from his childhood bedroom. Russell is currently on his (postponed due to Coronavirus) third and largest world tour Respite which will take him to 69 cities across 24 countries in 5 continents, and started with a sold-out, critically acclaimed UK arena run in Autumn 2019. Russell’s 2017 sell-out international tour, Round the World, saw him break the record for the largest English speaking stand-up show in China and play a record-breaking 10 night run at the Royal Albert Hall, overtaking 8 in a row jointly held by Frank Sinatra and Barry Manilow. The tour culminated with the global release of Netflix Special Recalibrate.

★★★★ Mark Wareham, The Mail On Sunday

“No show makes the current dreadful political of the world funnier than The Russell Howard Hour. The British comedian’s show airs on Sky One in the UK and episodes make their way to YouTube by the weekend, and the entire hour is worth watching for each and every instalment. The segments that break down the news of the week are always humorous, but it’s the Playground Politics and Play Date segments that are sure to have you belly laughing. Howard also does some of the very best interviews in the biz, including his recent sit-down with Tyson Fury that had the burly pro fighter breaking down his battle with depression. If you’re looking for a show that will help you find just a sliver of hope and joy in the world, this is the one for you.”

“We’ve reached the penultimate episode of this excellent comedy series. It’s little more than an extended version of BBC’s Good News but that’s exactly what fans (and Sky) wanted and he’s delivered, pushing his brand of topical, positive reinforcement stand-up with aplomb”

“A truly positive and perfectly balanced conversation, branching out to some rich areas of interest for certain – you’ll enjoy this one, get on board!”