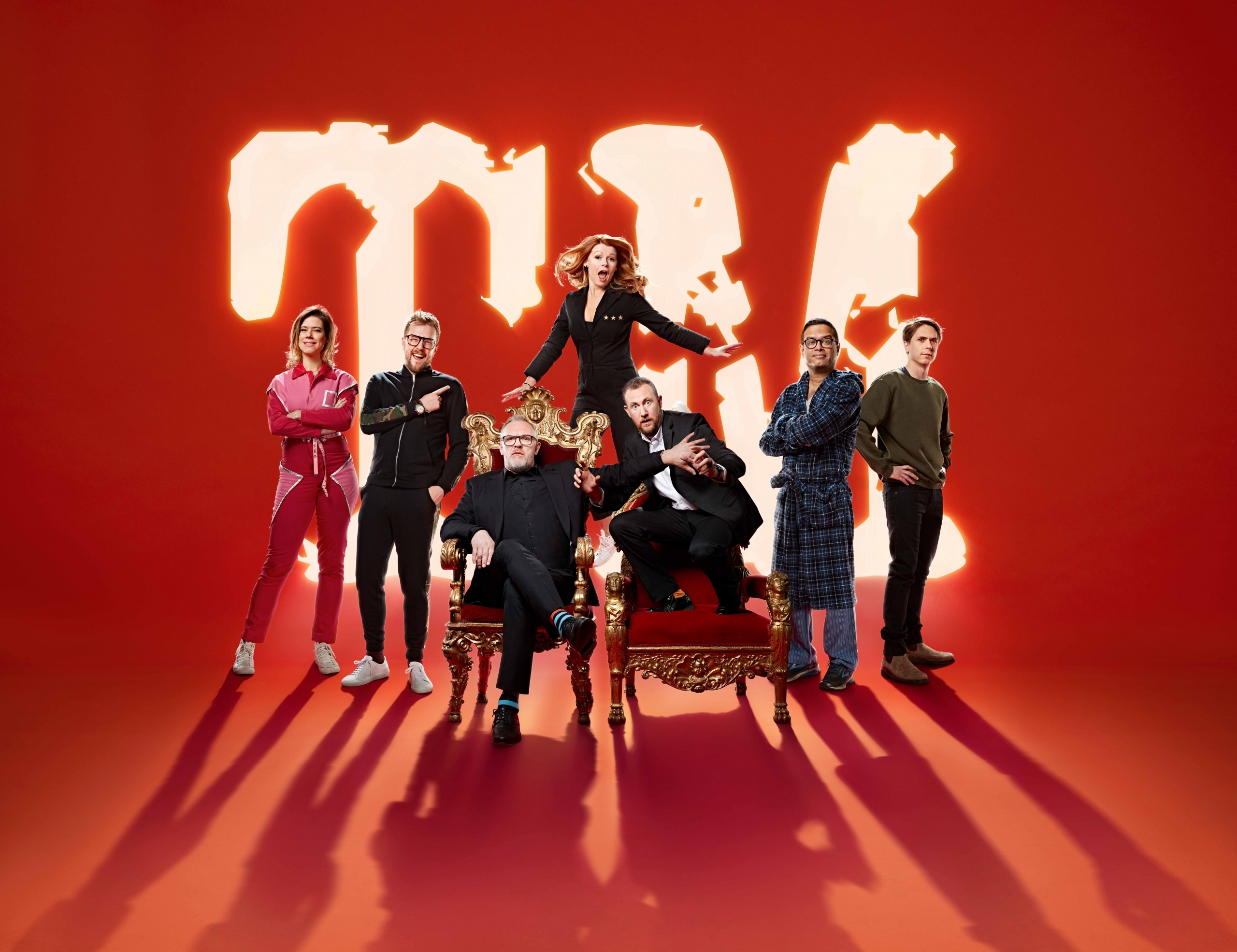 “there’s never been a better time for Taskmaster, one of Great Britain’s many hidden television gems, to finally make its way to the United States …Trying to describe the appeal of Taskmaster is like trying to catch lightning in a bottle — it’s nearly impossible, and it’s the kind of thing that needs to be seen to be believed… The only way to truly understand its magic is by checking it out for yourself.” Lauren Coates, Vulture

“Every episode is funny and surprising. This is the show I have recommended most often and most insistently to my friends and family during quar.” Margaret Lyons, The New York Times

“you’re going to need to tune in… Prepare yourselves for the giggle of a lifetime…Taskmaster, the popular British series, is coming to The CW this weekend, and if you haven’t yet set your eyes upon this feast of comedy, you are in for a treat.” Lauren Piester, E!

International Emmy and triple BAFTA nominated comedy game show TASKMASTER starring comedian and actor Greg Davies (Cuckoo, The Inbetweeners) in the title role of the all-powerful Taskmaster, who issues simple comedic and bizarre tasks to five regular contestants – usually comedians – with Alex Horne (the show creator) acting as the Taskmaster’s assistant. The tasks – usually performed in isolation, but occasionally in teams – are designed to encourage the players to think laterally and creatively.

A hit internationally, 74 episodes of TASKMASTER have been produced in the UK so far, with a further 60 ordered by Channel 4 as part of a landmark six season deal in 2020. The original TASKMASTER programme and format combined has been sold into 106 countries, with 140 episodes of the format being made outside the UK including local versions of the show produced in Belgium, Spain, Denmark, and New Zealand. The format has seen huge success in Europe winning TV Academy Awards equivalents in both Sweden, where it also had ratings of over a 50% market share in a primetime weekend slot, and Norway, while in Finland the first episode ranked in the top ten most watched shows in the country.

For viewing links, interview requests or further information please get in touch with pressoffice@avalonuk.com

What The US Press Has Said About Taskmaster So Far

“As we’re submerged deeper and deeper into the COVID-induced content vacuum that has all but cleared upcoming fall television slates, there’s never been a better time for Taskmaster, one of Great Britain’s many hidden television gems, to finally make its way to the United States….Taskmaster possesses its own unique, undefinable brand of insanity that has kept viewers coming back …The show’s popularity in Britain is hardly a fluke…Trying to describe the appeal of Taskmaster is like trying to catch lightning in a bottle — it’s nearly impossible, and it’s the kind of thing that needs to be seen to be believed. There’s no comparable American series… The only way to truly understand its magic is by checking it out for yourself.”

“Every episode is funny and surprising. This is the show I have recommended most often and most insistently to my friends and family during quar.”

“widely entertaining series…It’s a clever take on the classic British panel show format that doubles as a devious way to torture its celebrity guests — with hilarious, and occasionally genius, results.”

“you’re going to need to tune in… Prepare yourselves for the giggle of a lifetime…Taskmaster, the popular British series, is coming to The CW this weekend, and if you haven’t yet set your eyes upon this feast of comedy, you are in for a treat.”

“This English import brings a bit of refinement – at least by American standards …A healthy dose of degradation, both subtle and elegant. Who better to offer a contest built on domination and humiliation than our friends from across the pond.”

“Taskmaster: the Cult British Comedy Show Coming to Save America. This is no exaggeration. British comedy show Taskmaster is airing in the US for the first time and, just as it has in the UK, it will make Americans’ lives better”

“Many reality show fans have at least heard of delightfully understated stalwart The Great British Bake Off. However, the iconic baking competition isn’t the only unscripted British show worthy of your Sunday afternoon… Taskmaster is a great series if you’re a fan of dry, British humour, and is hilarious regardless of whether contestants dither about or throw themselves in with gusto”

“Taskmaster is just damned funny, from beginning to end. Davies is the perfect a-hole in the taskmaster role, and we love how Horne has made himself the show’s lackey…we wonder why it hasn’t come to the US sooner”

This week in TV pick

Top picks of the day

Top picks of the day

“‘Taskmaster,’ the U.K.’s Least Fair, Most Hilarious Game Show…we’re finally getting a proper airing of this TV import in the States”

“the show shines is in the tasks themselves, which can best be described as finely-tuned improv designed to put the comedians up a creek without a paddle”

“hilarious series…shows no signs of slowing down”

“File this under guilty pleasures, or an answer to the oft-asked question: What can I watch that’s just fun and takes my mind off things, preferably not streaming? Enter this long-running hit comedic game show imported from the U.K…The barbed rapport of Davies and droll sidekick Alex Horne (the series’ creator) is delicious, and there’s universal appeal in watching clowns happily make fools of themselves”

“Taskmaster is such a genius premise”

“a holiday from strife. It’s an open window on a suffocating day, and a blessed reminder that whatever else may be going on in the world, people are funny and inventive and magnificently willing to do stupid things to make each other laugh”

“It’s hard to top the original, imported by The CW to delight us with the barbed rapport of Davies and droll sidekick Alex Horne…you may not get all the parochial in-jokes, but there’s a universal appeal in watching clowns happily make fools of themselves”

“There’s competitiveness and craftiness and goofiness, and the warmth embedded in its mirth really snuck up on me. Suddenly, I was fully in and couldn’t wait to see more…Taskmaster’s frequently dumb challenges can be actually challenging, but best of all, they usually inspire a lot of creativity and laughter.”

Best British Comedy Shows Of The Past Decade

“I’ve spent the past few weeks binging Taskmaster…In these moments, there’s a simple joy of watching seven really funny people all gently mocking one another while in a room…The key to the show’s success is the relaxed, chatty atmosphere that’s created in the studio juxtaposed with the arch hilarity of the filmed challenges. It’s as if an NPR podcast crashed into one of those Japanese game shows you can catch on late-night cable. I wasn’t expecting to enjoy it, but after watching the first episode I quickly raced through the remaining 23.”

“the only word to describe Taskmaster is hilarious”

“a lively mix of Whose Line Is It Anyway? and Double Dare”

“While they haven’t succeeded in the past, panel game shows like Game On are gaining traction in the USA. These shows are influenced by the UK…Taskmaster, which has been hugely successful across the pond…the U.K. version will be airing on The CW in August”