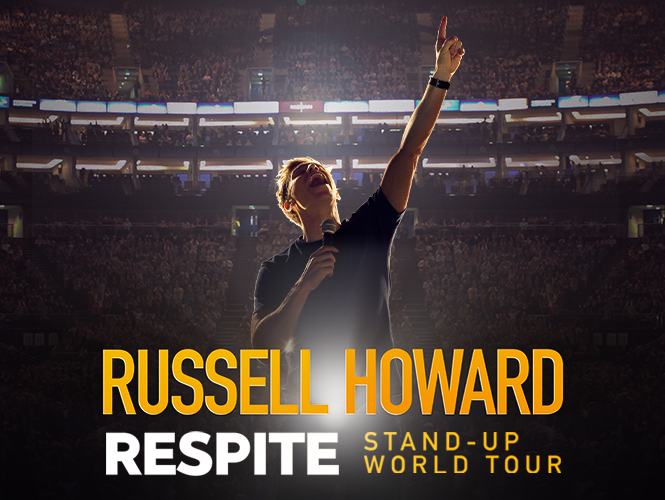 “a joy to watch” Elise Czajkowski, The New York Times

“He’s cheeky, he’s charming, and he may be your new favourite British export in a Brexit world” Time Out USA

“Howard is a megastar” ★★★★ Allan Radcliffe, The Times UK

“one of the world’s top comedians” Martin Hemming, The Sunday Times UK

It was announced today, Tuesday 28th April 2020, that following a sold-out and critically acclaimed UK arena run stand-up comedian Russell Howard (BBC’s Russell Howard’s Good News, Sky’s The Russell Howard Hour, Sky’s Russell Howard’s Home Time) has rescheduled dates in North America and Europe to take place in Spring/Summer 2021 for his third and largest world tour, Respite, due to the coronavirus outbreak. In total, the tour will take Russell to 69 cities across 24 countries in 5 continents with further information on additional postponed dates to follow.

Tickets for the rescheduled dates are on general now. Full dates available at: russell-howard.co.uk

Russell is currently on our screens presenting a new show, Russell Howard’s Home Time, from his childhood bedroom and donating his fee to NHS Charities Together and The Trussell Trust.  A far cry from the usual polished studio sets, the “absolutely fan-flipping-tastic” (Chris Evans) and “endearingly makeshift series” (The Daily Mail) sees Russell giving his unique perspective on current world events, as he chats to some famous faces and interesting people in lockdown including Jack Whitehall, Louis Theroux, Katherine Ryan, Greg Davies, Michelle Wolf, John Richardson, Guz Khan, James Bay, Stephen Merchant, Kasabian’s Serge Pizzorno, and heroes on the front line including Bafta and Emmy award winning film maker Hassan Akkad, intensive care doctor Aoife Abbey and mental health volunteer Caitlin Grant. The show airs twice a week in the UK on Tuesday at 10pm and Thursday at 10.30pm on Sky One and NOW TV. Every episode is also available worldwide at midday following broadcast via Russell Howard’s YouTube Channel which has over one million subscribers.

For more information please contact: Victoria Wedderburn on +447557160139 or VWedderburn@avalonuk.com

What The UK Press Have Said About Respite so far: