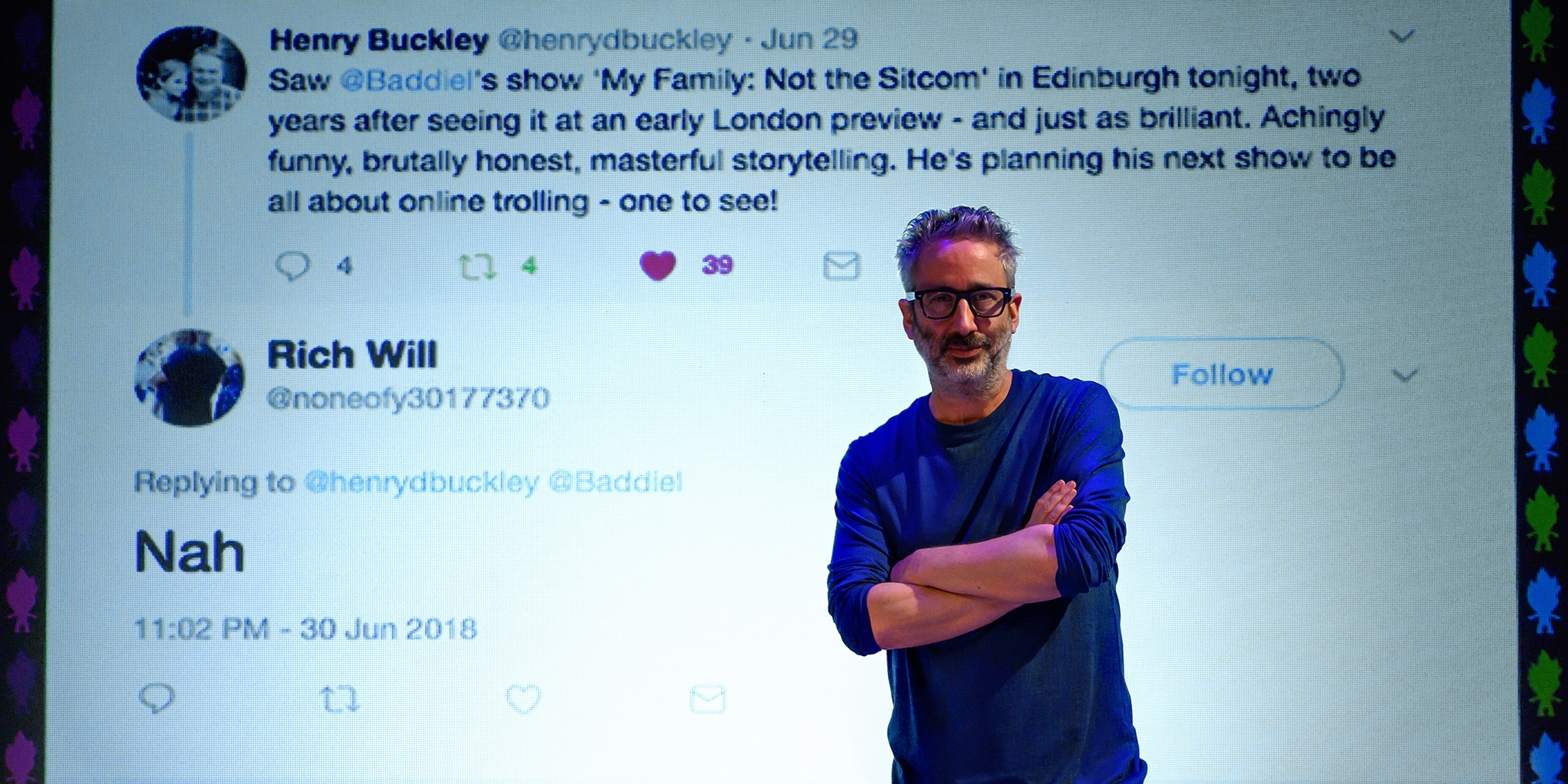 “Invigoratingly funny. Baddiel continues his extraordinary run of form as a live comedian as he reprises and reframes his best and worst Twitter encounters. Huge fun it is too”
★★★★ Dominic Maxwell, The Times

“The comedian leads us from weird to wonderful to ‘the absolute worst of humanity’ in his new show about social media…hilarious”
★★★★ Brian Logan, The Guardian

LONDON – 13th March – It was announced today that David Baddiel will bring his critically acclaimed one-man show, Trolls: Not The Dolls, to the Bloomsbury Theatre, London for four extra shows from Thursday 16th to Sunday 19th July 2020. This is in addition to the 53-date UK tour and already sold out performance at London’s prestigious Southbank Centre on 6th May.

Following his five-star, Olivier Award-nominated, hit one-man show, My Family: Not The Sitcom (“an excruciatingly funny celebration of his parents’ eccentricities,” The Sunday Times), and the return to number 1 of his seminal football anthem Three Lions in the summer (a record-breaking fourth time at the top of the UK Official Charts), David returned to the stage with Trolls: Not The Dolls this January.

Trolls – the terrible people who spend all day insulting and abusing strangers for no other reason than to fill the huge gaps in their souls.  There is a common wisdom about how to deal with trolls: don’t, for goodness sake, encourage these people by replying to them.

It’s a good law. And it’s one that David Baddiel has consistently broken. Because David has always seen trolls as hecklers, and if a comedian gets heckled, it is their duty not to ignore the heckler, but to wittily put them down.  Over the years, David has spent a lot of time doing this, which has led him to think that there might be a show in it: a show that would say something about how we live now.

David has stories to tell, of the dark, terrible and hysterically absurd cyber-paths that interacting with trolls has led him down.  Come with him on this comedy journey into our culture’s most dank virtual underground.  You will come back safe, more able to deflect your own trolls, and only a little bit soiled.

This show is the third in a series of shows from David Baddiel following the both critically acclaimed My Family: Not The Sitcom (2016) and Fame: Not the Musical (2013), which saw David return to live comedy after 15 years.

Other praise for Trolls: Not The Dolls…

“A laugh-filled show. Baddiel delights in taking on his Twitter trolls.”
★★★★ Veronica Lee, The Arts Desk / The i

“This show is so funny that, for all the effluent that swills around the Twitter cesspit, it could encourage even the most reluctant among us to sign up. Like!”
★★★★ Steve Bennett, Chortle

What the press said about… My Family: Not The Sitcom

What the press said about… Fame: Not the Musical