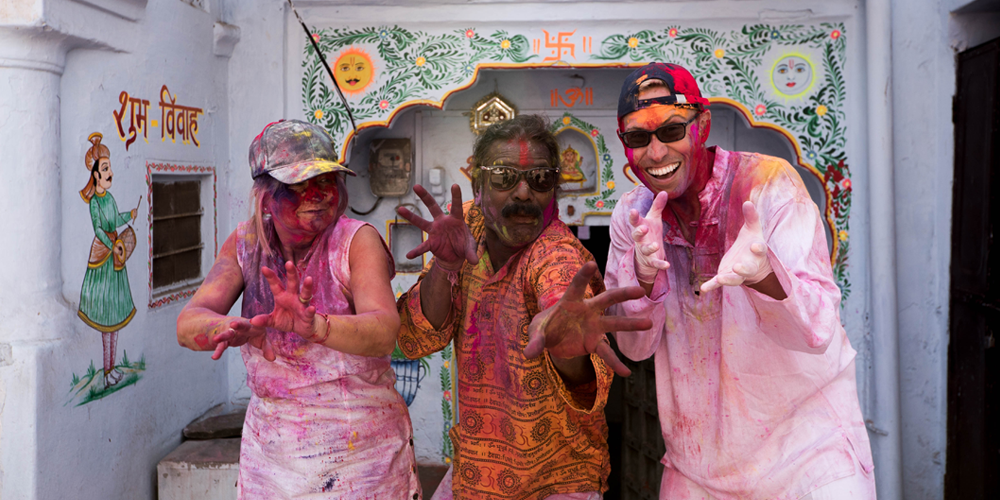 “Forget bank of mum and dad: parents must now be prepared for the fact that one day their adult comedian offspring might demand they act as comic foil on a TV travelogue. Russell Howard’s mother, Ninette, is remarkably laid back, though, as she accompanies her boy for a week on the Thai island Koh Pha-Ngan.” Critic’s Choice, The Sunday Times

Russell Howard and his mum Ninette are off on brand new and unusual adventures in India, South Korea, Thailand and Japan. The highly anticipated fourth series of Russell Howard and Mum: Globetrotters (6 x 60 minute series) premieres on Comedy Central UK on the 9th of October at 10pm. The first three series reached 4.2M individuals, with the first series being the highest rated new commission on the channel the year it launched. After achieving as much as +241% on the 16-34s slot average and +172% on the adults slot average, series three and four were commissioned with extended episodes.

Russell and Ninette’s funny, warm and engaging relationship is once again put under the microscope across as they travel across Asia. They go on a journey to enlightenment in India, experiencing spiritual head massages from the Cosmic Barber and the Hindu festival of Holi. The duo travel to South Korea to become the first ever ‘mum & son’ K-Pop group, with help from everyone from K-Pop superstars and singing teachers to plastic surgeons. In Tokyo they are granted eternal youth in a Maid Café, before renting some friends to take to a parasite museum. Ninette gets to lead the Chinese New Year parade (in Thailand, of course) while Russell tries kickboxing, before receiving a fire massage from a zealous monk. They return to India to get stuck in playing kabaddi in Kerala, and they learn the storytelling art of Kathakali, donning the traditional make up and dress to re-enact Star Wars. Finally, Ninette turns 60 in Tokyo, which in Japanese culture is known as Kanreki, the rebirth. Russell marks the occasion by setting his mum the challenge of making a bucket list. Ninette chooses to milk a cow, eat a deep-fried Mars Bar, go cheerleading and see the Northern Lights. In Japan.

As well as a regular face on TV, Russell is a globally successful stand-up comedian and is currently on his third and largest world tour Respite, which begins with a UK arena tour before taking him to 51 cities in 24 countries across 5 continents. Russell broke Frank Sinatra and Barry Manilow’s record for the most consecutive nights at the Royal Albert Hall and performing the largest ever stand-up show in China on 2017’s Round The World tour. Russell has a social media following of over 3.4 million Facebook fans around the world with more followers than any other British comedian.

The shows launch underlines Comedy Central UK’s ongoing push to ramp up its offering of UK commissions. Since 2015, the channel has continued its explosive growth – including its highest ever UK commission Roast Battle which, along with Joel and Nish Vs The World, Takeshi’s Castle, Stand Up Central, Drunk History and Your Face or Mine have all been brought back for brand new seasons. Comedy Central UK also recently announced that it has commissioned a comedy reboot of the cult quiz gameshow format Blockbusters with household name Dara O’Briain as host, which is set to air in 2019.

What the press have said about Russell Howard

“one of the world’s top comedians” Martin Hemming, The Sunday Times

Episode 1: The Road to Enlightenment in Pushkar

Russell and Ninette are getting spiritual in the Holy City of Pushkar in India. Their Cosmic guide is a Barber who is out of this world. He’s taking them on a journey of enlightenment via a rat temple, the festival of Holi and one hell of a massage that teaches them the true meaning of ‘RELAX!’.

Forget Gangnan Style, Russell and Ninette are in South Korea and are doing it Oppan Howard style. They are in Seoul and getting fully involved in the music phenomenon of K-pop and transforming themselves into the first and possibly last mother and son K-Pop duo…

Russell and Ninette are in Tokyo but ignoring the usual tourist traps, they’re heading underground and embracing the truly weird and wonderful side of this metropolis. They’re meeting some magical maids, renting some mates and Russell’s having a go at being a gigolo at one of Tokyo’s infamous Host Clubs.

It’s Chinese New Year so obviously Russell and his mum Ninette are in… Thailand. Chinese New Year is massive in Thailand and the Howards are getting fully involved in the celebrations of the Year of the Dog. Along the way they’re sampling some of the more unusual activities Thailand has to offer before literally chasing the dragon in the New Year parade.

Episode 5: Getting Cultural in Kerala

Russell and Ninette are in Kerala in India, they’re embracing the Southern states’ traditions, both old and new. From climbing trees to get their hands on some booze, pouring oil on their heads to raise their IQ’s and trying out the ancient performance artform of Kathakali to tell the story of Star Wars.

The Howards are in Japan for Ninette’s 60th Birthday and in this amazing country Russell has set her a challenge: come up with a birthday bucket list including all the incredible things she would love to do. Ninette’s beautiful mind has not quite delivered a list tailored for the land of the rising sun so they’re off to break a world record with her arse, find the northern lights in the far east and milk a cow…

Comedy Central is a leading Pay TV General Entertainment channel and is part of Viacom International Media Networks (VIMN). A joint venture between VIMN (75%) and BSkyB (25%), Comedy Central airs on the Sky and Virgin Media platforms. Comedy Central launched in the UK in April 2009 and is one the fastest growing channels in the marketplace.

The channel broadcasts a mix of hit US acquisitions and original UK productions targeting a 16-54s-year old audience. In 2019, the channel triumphed at the Broadcast Digital awards, winning Best Entertainment Channel.

Comedy Central UK’s hit original commissions include Roast Battle, the channels highest rated UK commission, Your Face or Mine, Russell Howard and Mum: Globetrotters and Takeshi’s Castle, all of which are returning later in 2019 for brand new seasons. Comedy Central UK continues to add to its roster of home grown commissions with additions such as The Comedy Bus featuring top comedic talent and also saw great success with its new comedy re-boot of the iconic quiz show Blockbusters reaching 232.7K 16-54s, continuing to prove we are the home of comedy in the UK.

Off air, the channel continues to build its brand experience offering, with award winning Friendsfest entering its 5th year and most recently Comedy Central Live, a stand up and experiential festival featuring over 100 of the biggest names in Comedy.

US titles Impractical Jokers, Ru Paul’s Drag Race, The US Office, and South Park also continue to draw in massive numbers. Plus popular nostalgic titles are still a ratings hit with shows such as Friends, Fresh Prince and Two Guys and a Girl, all of which make Comedy Central UK a place where anyone and everyone can come to for daily laughs!