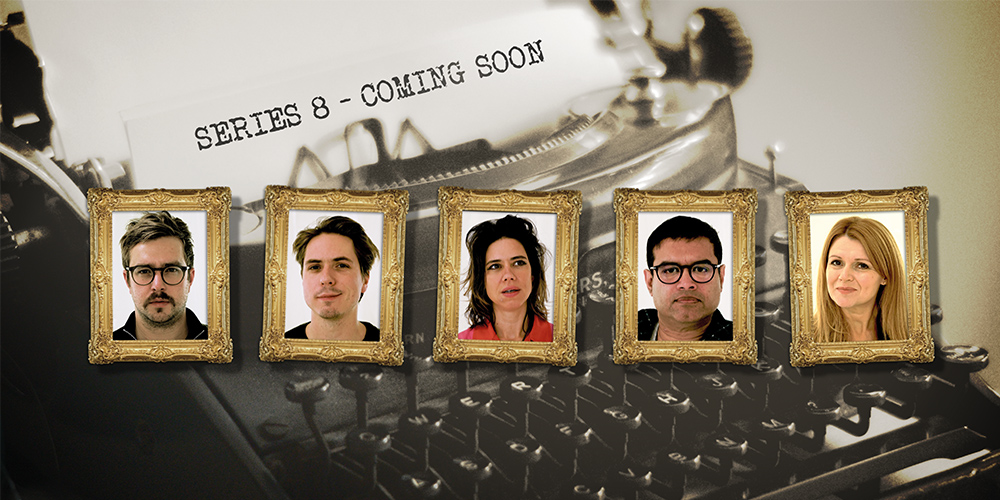 Taskmaster is one of the most consistently innovative and funny series on telly
Joe Clay, The Times, T2

The most reliable source for laughs on television
Gabriel Tate, The Times Saturday Review

The double BAFTA nominated and Broadcast Award winning UKTV Original series Taskmaster returns to Dave and welcomes a new group of candidates placing themselves at the mercy of Taskmaster tyrant Greg Davies, and the scrutiny of stats keeper and skivvy Little Alex Horne. Dave’s eighth series of the most competitive and fierce comedy game show on television will air in May.

Risking life, limb, and dignity in the hope of making the Taskmaster proud are: BAFTA winning comedian Iain Stirling (Love Island, Host of Dog Ate My Homework), actor and writer Joe Thomas (Inbetweeners, Fresh Meat), acclaimed stand-up Lou Sanders (8 Out of 10 Cats, Sick of It), comedian and champion quizzer Paul Sinha (The Chase, Tonight At The Palladium), and BAFTA winning actor Sian Gibson (Peter Kay’s Car Share, Murder On the Blackpool Express). Unaware of what awaits them in each wax sealed envelope, only one competitor can become the victorious owner of His Royal Task-ness’ golden head and be crowned the next Taskmaster Champion.

Produced by Avalon, Taskmaster’s viewing figures have increased series on series. The seventh series of the Dave show starring James Acaster, Jessica Knappett, Kerry Godliman, Phil Wang, and Rhod Gilbert was the most successful to date with an average of 1.5 million viewers per episode, increasing by 7% compared to the last series and remains the most watched show on UKTV Play with over 7.4 million views.

An international hit, Taskmaster has been sold into 17 countries including original versions of the show being developed for Comedy Central in the U.S. (starring Reggie Watts as the Taskmaster), TV 2 in Denmark, VTM in Belgium, TVE in Spain, and two series on Sweden’s SVT channel.

Away from the screen, the launch of the Taskmaster Book 200 Extraordinary Tasks for Ordinary People was met with huge popularity, sold over 57K copies following publication, and swiftly rose to join top 20 bestselling hardback books in the UK four days after its release during the competitive Autumn/Winter sales period.

Executive producers for the series are Alex Horne, Richard Allen-Turner, Rob Aslett, James Taylor, Jon Thoday, and Andy Devonshire (The Apprentice and The Great British Bake Off), who also acts as series director, and Hilary Rosen for UKTV. Andy Cartwright is series producer.

The eighth series of Taskmaster will air on Dave in May, catch up on series 1-7 on UKTV Play – http://uktvplay.uktv.co.uk

WHAT THE PRESS HAS SAID ABOUT TASKMASTER

We’re up to series 7 and it’s as winning as ever
Sharon Lougher, Metro

The funniest show on telly
The Sun, TV Magazine

The show routinely delivers the funniest, most unexpected comedy of the TV week…The cleverest spin on the panel show format in years, it’s must-watch TV
Wesley Mead, Den of Geek.

On demand on Sky and UKTV Play

Since bursting onto TV sets in 2007, Dave has been putting in hours at the gym and is now a beefed-up powerhouse of brand new and original commissions from some of the biggest stars and production companies in entertainment. Romesh Ranganthan, Jon Richardson and YouTube sensation Yianni Charalambous are just some of the latest additions to the channel’s ever-increasing slate.

Whether it’s innovative comedy entertainment like the BAFTA and Emmy-nominated Taskmaster, Unspun with Matt Forde, and Dara o Briain’s Go 8 Bit or scripted sitcoms including the worldwide hit Red Dwarf, Zapped, and Porters, Dave’s guaranteed to work your funny bone like never before.

The award-winning independent has eleven imaginative brands – UKTV Play, Dave, W, Gold, Alibi, Yesterday, Drama, Really, Home, Eden and Good Food. These include the two most popular non-PSB channels in the UK and account for nearly 10% of the British commercial TV market.

Now celebrating over 20 years at the forefront of digital television, UKTV – an independent commercial joint venture between BBC Studios and Discovery, Inc. – is proud to be the first British television broadcaster in The Sunday Times top 100 companies list.