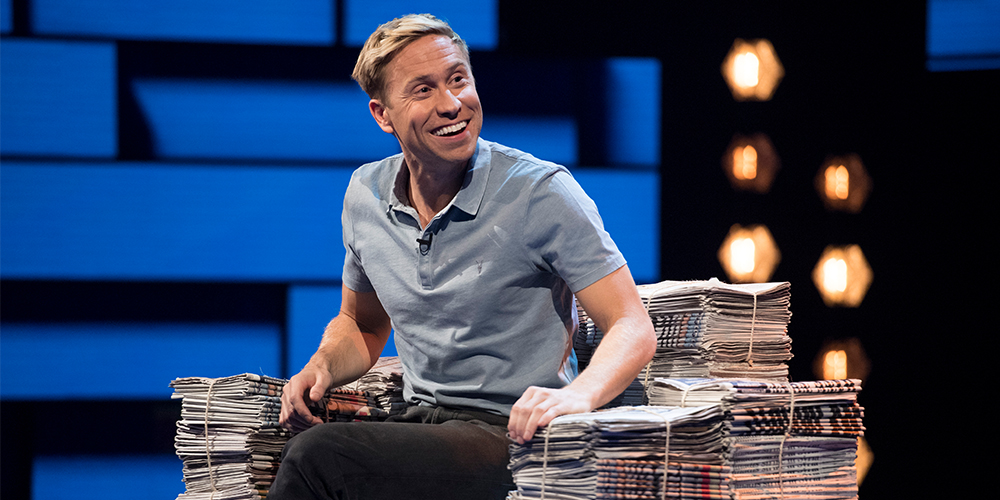 “altogether more politicised and hard-hitting….It was a treat to find Howard showing so much bite… it’s not often you get such spiky satire on Sky1, let alone a feminist poem referencing Caligula, Minerva and Augustus’ dictums. For that, Howard and his Hour should be applauded.” Michael Hogan, The Daily Telegraph­­­­­

“a big hit for Sky” Forbes

London, 24th January 2019 – The Russell Howard Hour has been commissioned for a further series three and four whist the second series is currently on air until Thursday 28th February on Sky One. The first series of the topical entertainment show, which sees Russell Howard offer his unique and acclaimed perspective on news and current affairs, was the most successful new non-scripted entertainment series to launch on the channel since 2010 and had over 100 million views across social media. The third, fourteen-part series (14 x 60’) will go into production in autumn 2019.

Phil Edgar-Jones, Director of Sky Arts: “Russell has established himself as one of the foremost satirical voices on TV and online. We are happy as hell that he has a home on Sky One where he can bring our audiences his unique and hilarious take on our messed up world.”

James Taylor, Executive Producer for Avalon said: “We’re delighted that, for at least another 2 years, we’ll be bringing The Russell Howard Hour to Sky One where Russell can continue to navigate through and make us laugh at what must be the bleakest and most terrifying news cycle in living memory.”

Russell Howard said: “I absolutely love doing this show. It’s such a ridiculous privilege that I get to write jokes as the world spins out of control.”

The Russell Howard Hour is a Sky original production produced by Avalon.  The commissioning editor at Sky is Shirley Jones, whilst Executive Producers are Richard Allen-Turner, James Taylor and Jon Thoday for Avalon.  The show is directed by Peter Orton and series produced by Robyn O’Brien.

For more information please contact: Victoria Wedderburn at Avalon on 0207 598 7222 or VWedderburn@avalon-entertainment.com or Claire Scott at Sky on claire.scott@sky.uk

Russell is an internationally successful stand-up comedian breaking Frank Sinatra and Barry Manilow’s record for the most consecutive nights at the Royal Albert Hall and performing the largest ever stand-up show in China on 2017’s Round The World tour. In autumn 2019, Russell returns to the live stage with his third and largest world tour to date, Respite. Beginning with a nationwide arena tour, the dates overall will see Russell play 5 continents, 24 countries and 51 cities. Russell has a social media following of over 3.4 million Facebook fans around the world with more followers than any other British comedian.

“Russell Howard has truly gone global…Though he may be known for his cheeky, happy-go-lucky demeanour, Howard has never been one to shy away from the bigger issues…Whether it’s highlighting child hunger, unashamed praise for the police, or taking aim at Trumps’ views on transgender people in the military, the varying topics are all things Howard has a strong opinion on.” Alex Nelson, The i

“One of the world’s top comedians” Martin Hemming, The Sunday Times

“a refreshing antidote to the default world-weary cynicism of so many of his comedy peers.” Sharon Lougher, Metro

“no one can seriously deny him his place at comedy’s top table…the way in which Howard views the world has changed. He is more reflective, less flippant, than he used to be” Rupert Hawksley, The Daily Telegraph

“A truly positive and perfectly balanced conversation, branching out to some rich areas of interest for certain – you’ll enjoy this one, get on board!” Scroobius Pip

With 23 million customers across seven countries, Sky is Europe’s leading media and entertainment company and is proud to be part of the Comcast group.

We have 31,000 colleagues and together we want to connect our customers to more of what they love, including our award-winning original productions, like Patrick Melrose and Save Me, and great shows from our partners including HBO, Showtime and Warner Bros. And our ever improving technology makes it even easier for customers to watch more of the shows they love with personalised recommendations and voice control and, our online streaming service, NOW TV, brings all the enjoyment of Sky with the flexibility of a contract free service.

We treat our customers better than anyone else in our field, as Ofcom’s complaints data shows, and we look after our staff too. Sky is one of The Times Top 50 employers for women and we’re in Stonewall’s list of Top 50 LGBT-Inclusive employers.

We also use our position as the leading entertainment business in Europe to do the right thing. As part of Sky Ocean Rescue campaign we’re committing to be completely single-use plastic free by 2020, we’re investing £25 million over five years in ocean-saving tech and we’re supporting the WWF to protect our oceans with designated Marine Protected Areas.