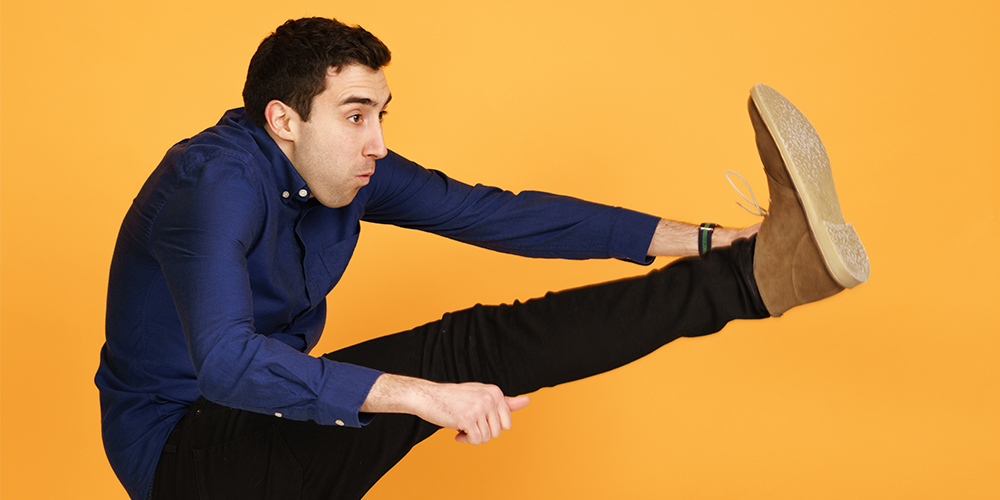 Bugeja has an eye for original comic detail that’s all his own
James Kettle, The Guardian

drum-tight, as if polished by a sitcom writers’ room to cram as many jokes in as humanly possible
★★★★ Steve Bennett, Chortle

blends the intelligence of a well crafted hour with some touching emotional honesty
★★★★ Jay Richardson, The Scotsman

Building on the success of a critically-acclaimed, sell-out run at the Edinburgh Festival Fringe, Steve Bugeja extends the tour of his 4th solo show Almost into 2019 totaling an impressive 29 dates. He will perform additional shows of his latest and most confessional stand up hour yet from 2nd February to 15th March. Tickets can be found at stevebugeja.com.​

Trapped on a 13-hour flight, Steve receives a text that flips his world upside down, leading him to question his entire life and how little he’s achieved in it (aside from having a top score on the computer game Train Simulator, but you can’t tell your grandkids that). Determined not to go through life with nothing to show for it, he attempts to become a more interesting, erudite, all round exceptional person. No longer content with wasting his life away on computer games, the BBC New Comedy Award winner tackles heartbreak head on, in a show that will see Steve stick it to the man and become the person he never thought he could be.

On TV and radio Steve hosts BBC Radio 4’s comedy show Economics with Subtitles, has featured on Love Island: Aftersun (ITV2), Russell Howard’s Stand Up Central (Comedy Central), Top Tens (BBC Three), The Dog Ate My Homework (CBBC), Pop Sludge (4Music), Fresh from the Fringe (BBC Radio 4), and regularly features on Love Island: Morning After Podcast. Making a name for himself internationally, Steve has been invited to perform at the Melbourne International Comedy Festival for the past two years, appearing on ABCTV’s Opening Night Comedy Allstars Supershow and twice on Comedy Up Late on the same network.

Also a prolific writer, Steve was a key member of the writing team for The Russell Howard Hour (Sky One), and has contributed material to Mock the Week (BBC Two), 8 out of 10 Cats (Channel 4), Russell Howard’s Good News (BBC Two), CelebAbility (ITV2), The Now Show (BBC Radio 4), and The News Quiz (BBC Radio 4).

Almost is Steve’s fourth solo show, following his previous critically-acclaimed shows Summer Camp (2017), Unpronounceable (2016) and Day Release (2015), which were performed to sold-out crowds at the Edinburgh Festival Fringe and quickly established him as a mainstay on the comedy scene. Unpronounceable and Summer Camp went on to tour nationwide, selling out increasingly large venues year on year.

What the press has said about Steve Bugeja:

fascinating…The detail is delicious and the laughs warm steadily while Bugeja shares his story with unabashed honesty
★★★★ Vicky Nangle, Fest

Steve is a charming, likeable stand-up with a set packed with gags
★★★★ Ross Crae, Sunday Post

For more information and press tickets, please contact: Florrie Sheehan at fsheehan@avalonuk.com or 0207 598 7222