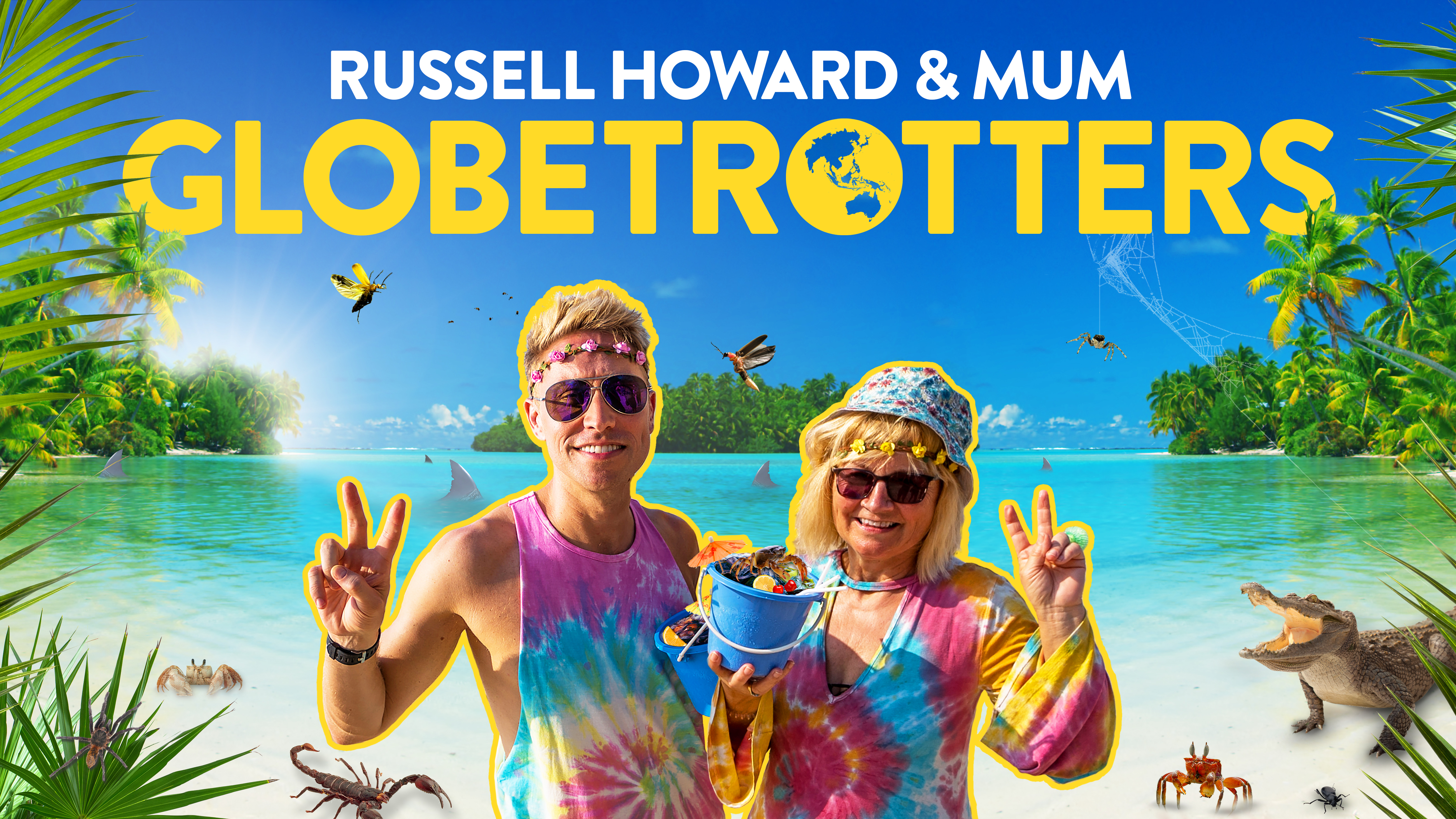 “one of the world’s top comedians” Martin Hemming, The Sunday Times

“Howard is routinely a delight – silly, personable and with a superb knack for observation. This king of cockle-warmers is about to rule the world” Sharon Lougher, Metro

Following 2016 and 2018’s incredible adventures in the USA, Russell Howard and his mum Ninette Howard return to our screens with a trip to the world’s largest continent for a taste of Asia. The highly anticipated 6 x 60 minute series (twice the length of series one and two’s 30-minutes episodes) premieres on Comedy Central UK on the 23rd of January at 10pm. The first two series reached 3.7M individuals, with the first series being the highest rated new commission on the channel the year it launched. After achieving as much as +241% on the 16-34s slot average and +172% on the adults slot average, series three and four were commissioned with extended episodes.

As Russell and Ninette further broaden their horizons in the Far East, the pair’s warm, funny and engaging relationship is once again put under the microscope. On their tour, they step back in time to become ultimate assassins in Japan and embark on a more futuristic venture to high tech Seoul, South Korea to observe the rise of the machines. The duo squeeze in the gap year they never had in to one week on the travellers’ paradise island Koh Phangan, Thailand. In Mumbai, The City Of Dreams, Russell and Ninette enrol in a 5 star acting academy boasting Slumdog Millionaire protégés to learn what it takes to make it in Bollywood. On a visit to Vietnam’s capital Hanoi, they lend their hands to folkloric water puppetry before heading away from the hustle and bustle of town to compete in a rural Olympics. ​ The journey ends communing with nature in Northern Thailand, Chiang Mai.

As well as a regular face on TV, Russell is a globally successful stand-up comedian breaking Frank Sinatra and Barry Manilow’s record for the most consecutive nights at the Royal Albert Hall and performing the largest ever stand-up show in China on 2017’s Round The World tour. In autumn 2019, Russell returns to the live stage with his third and largest world tour to date, Respite. Beginning with a nationwide arena tour, the dates overall will see Russell play 5 continents, 24 countries and 51 cities. Russell has a social media following of over 3.4 million Facebook fans around the world with more followers than any other British comedian.

The shows launch underlines Comedy Central UK’s ongoing push to ramp up its offering of UK commissions. Since 2015, the channel has continued its explosive growth – including its highest ever UK commission Roast Battle which, along with Joel and Nish Vs The World, Takeshi’s Castle, Stand Up Central, Drunk History and Your Face or Mine have all been brought back for brand new seasons. Comedy Central UK also recently announced that it has commissioned a comedy reboot of the cult quiz gameshow format Blockbusters with household name Dara O’Briain as host, which is set to air in 2019.

What the press have said about Russell Howard

For more information please contact: Victoria Wedderburn on 0207 598 7222 or VWedderburn@avalonuk.com or Emily Holmes Emily.Holmes@vimn.com on 0203 580 3119 at Comedy Central

Russell and his mum Ninette have a full backpacker blowout on the ultimate rave island Koh Phangan, Thailand. They squeeze in the gap year they never had in to one week, drinking mystical buckets of booze, Djing at jungle parties and going full hippy at a mass love-in breathing ceremony.

Russell and his mum have arrived in Japan. They’re stepping back in time to become the ultimate assassins: Ninette is going full Ninja, despite her camel toe, and Russell is throwing on a nappy and getting neck deep in some Sumo man-boob, as well as massacring some teeny tiny trees

Episode 3: City of the Future in South Korea:

Russell and his mum, Ninette, are in the City of the Future. They’re in High-Tech Seoul in South Korea and are taking control of and corrupting a Mega-Robot, joining a crew of Cos players as a drug addled hedgehog and a pint-sized plumber as well as going on their own Virtual Killing spree across the city.

Russell and his mum Ninette have arrived in Vietnam. While in the capital of Hanoi, they taste local delicacies, create melodies with a classically trained wizard and get involved with water puppetry before heading away from the hustle and bustle of town to compete in a rural Olympics. ​

Episode 5: Living the Dream in Mumbai:

Russell and his mum are in Mumbai, the City of Dreams. Their new mate Alekh is getting them to Act! Act! Act! Bollywood style, share their bedroom secrets with Mumbai’s oldest sexpert and meet the record breaker who will put them off chocolate sauce for life.

Russell and Ninette have arrived in Northern Thailand, Chiang Mai to commune with nature – they visit a sanctuary to give some TLC to rescue elephants, are faced with milking deadly cobras and create their own jungle crib.

Comedy Central is a leading Pay TV General Entertainment channel and is part of Viacom International Media Networks (VIMN). A joint venture between VIMN (75%) and BSkyB (25%), Comedy Central airs on the Sky and Virgin Media platforms. Comedy Central launched in the UK in April 2009 and is one the fastest growing channels in the marketplace. In Fiscal 2018 (Oct 17 to Sept 18) The Comedy Central Group averaged a share of 2.03%, an excellent performance in a competitive year for TV. The channel broadcasts a mix of hit US acquisitions and original UK productions targeting a 16-34-year-old audience.

Comedy Central UK continues its explosive growth in FY18 – including its highest ever UK commission Roast Battle which, along with Russell Howard and Mum, Joel and Nish Vs The World, Takeshi’s Castle and Your Face or Mine have all been brought back for brand new seasons, underlining Comedy Central UK’s ongoing push to diversify its British comedy offering and continue to add to its roster of home grown commissions.

US titles Impractical Jokers, Bob’s Burgers and South Park also continue to draw in massive numbers and popular nostalgic titles such as Friends, Scrubs and Fresh Prince are still a ratings hit.

Avalon and Topical Television form the television arm of the company and other shows recently in production include:  Catastrophe (C4/Amazon Prime), Taskmaster (Dave), The Russell Howard Hour (Sky One), Not Going Out (BBC One), Stand Up Central with Rob Delaney (Comedy Central UK) and Russell Howard & Mum: Globetrotters (Comedy Central UK); whilst the catalogue is sold worldwide by Avalon Distribution.