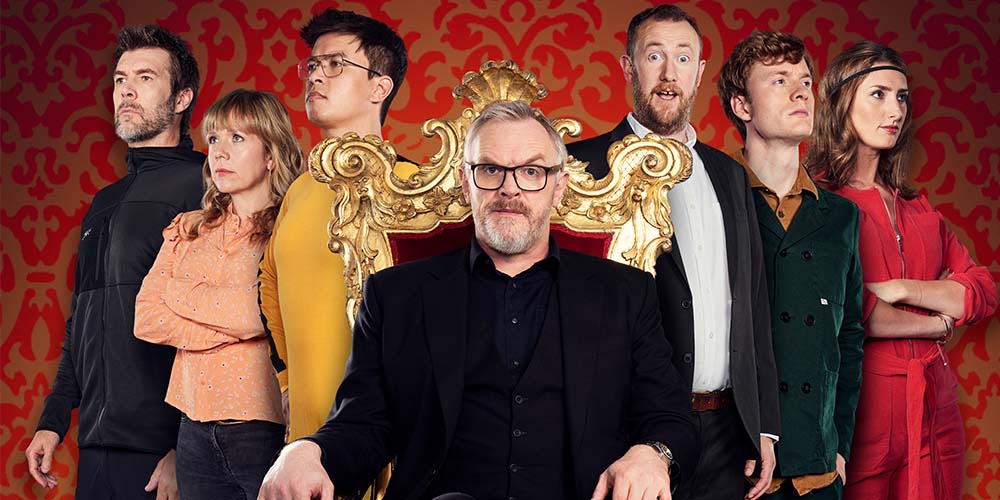 London – Tuesday 30th October 2018 – The current series of Taskmaster, Avalon’s award winning and critically acclaimed series on UKTV’s Dave, has eclipsed all previous series. The average Total Consumption per episode of series seven so far has reached 1.44 million , up 7% on the last series, and this figure is set to rise once complete 28 day data has been calculated.

The news makes series seven of Taskmaster its most successful to date, with the BAFTA and Emmy-nominated show widening its fan base and continuing to attract new viewers. ABC1 viewers are up 13%, and more 16-34s are tuning in than ever before, with an 11% increase on last series.

Taskmaster was created by comedian Alex Horne as a live show which ran at the Edinburgh Festival Fringe in 2010 and 2011. Alex then worked with independent production company Avalon to turn it into a TV proposition which began airing on Dave in 2015. The show features Greg Davies as the Taskmaster who, with the help of his right-hand man, Alex, sets out to test the wiles, wit and wisdom of five hyper competitive comedians through a series of ingenious challenges. With the chance to be crowned show champion, rivalry amongst the comedians is encouraged, dodgy tactics rewarded and bribes accepted.

Alex Horne, creator and executive producer of Taskmaster said “I recently watched an episode from the first series of Taskmaster and was amazed at how fresh-faced and cheerful I looked. I had no idea then that I’d still be serving such a powerful Taskmaster now or that I would have been demeaned in so many different ways in the intervening 50 episodes. I am a very lucky little man”.

Luke Hales, Channel Director, Dave, said, “If there is one show on Dave that really sums up the heart, soul and ambition of the channel, it is Taskmaster. The show was brilliant from the off and continues to go from strength to strength – it feels as fresh, funny and distinct as it did back in 2015. It’s great to see that we can continue to grow the show even after seven series and I don’t think we have reached the ceiling yet, especially now we can more accurately measure its consumption across all platforms.”

Taskmaster has been a stand out success for Dave, with the UKTV Original currently the highest rating show on the network this year. It was recently crowned Best Entertainment Programme at this year’s Broadcast Awards (beating Strictly Come Dancing, I’m A Celebrity… Get Me Out Of Here!, Love Island, The Voice UK, and All Round To Mrs. Brown’s) and, in addition to two BAFTA nominations and an International Emmy nomination, Taskmaster has also been shortlisted for RTS and Broadcasting Press Guild Awards.

The domestic success of the series has proven an international draw, with local versions of the show airing on Comedy Central in the U.S. (starring Reggie Watts as the Taskmaster), TV 2 in Denmark, VTM in Belgium, TVE in Spain, and two series on Sweden’s SVT channel. The format has been sold into 15 territories while the finished programme has been sold to New Zealand’s TVNZ and UKTV in Australia.

To date, 35 famous contestants have taken part in the UK version of Taskmaster, competing in 288 tasks. Series seven of the hit show is currently airing on Dave and series eight is being cast and will be shown next year, with a further series (series nine) already commissioned.

About Avalon:
Avalon is a multi-award winning talent management, live promotion and television production group with offices in the UK and the USA. Avalon and ARG, the talent management arm, has discovered and represents many artists that are household names, both in the UK, the USA, and around the world.

Since bursting onto TV sets in 2007, Dave has been putting in hours at the gym and is now a beefed-up powerhouse of brand new and original commissions from some of the biggest stars and production companies in entertainment. Romesh Ranganthan, Jon Richardson and YouTube sensation Yianni Charalambous are just some of the latest additions to the channel’s ever-increasing slate.

About UKTV
UKTV is a commercial broadcaster reaching almost 40m viewers every month.

The award-winning independent has eleven imaginative brands – UKTV Play, Dave, W, Gold, Alibi, Yesterday, Drama, Really, Home, Eden and Good Food. These include the two most popular non-PSB channels in the UK and account for nearly 10% of the British commercial TV market.

Now celebrating over 20 years at the forefront of digital television, UKTV – an independent commercial joint venture between BBC Studios and Discovery, Inc. – is proud to be the first British television broadcaster in The Sunday Times top 100 companies list.