STAY IN! EVERY NOT GOING OUT EPISODE RELEASED ON DVD FOR THE FIRST TIME 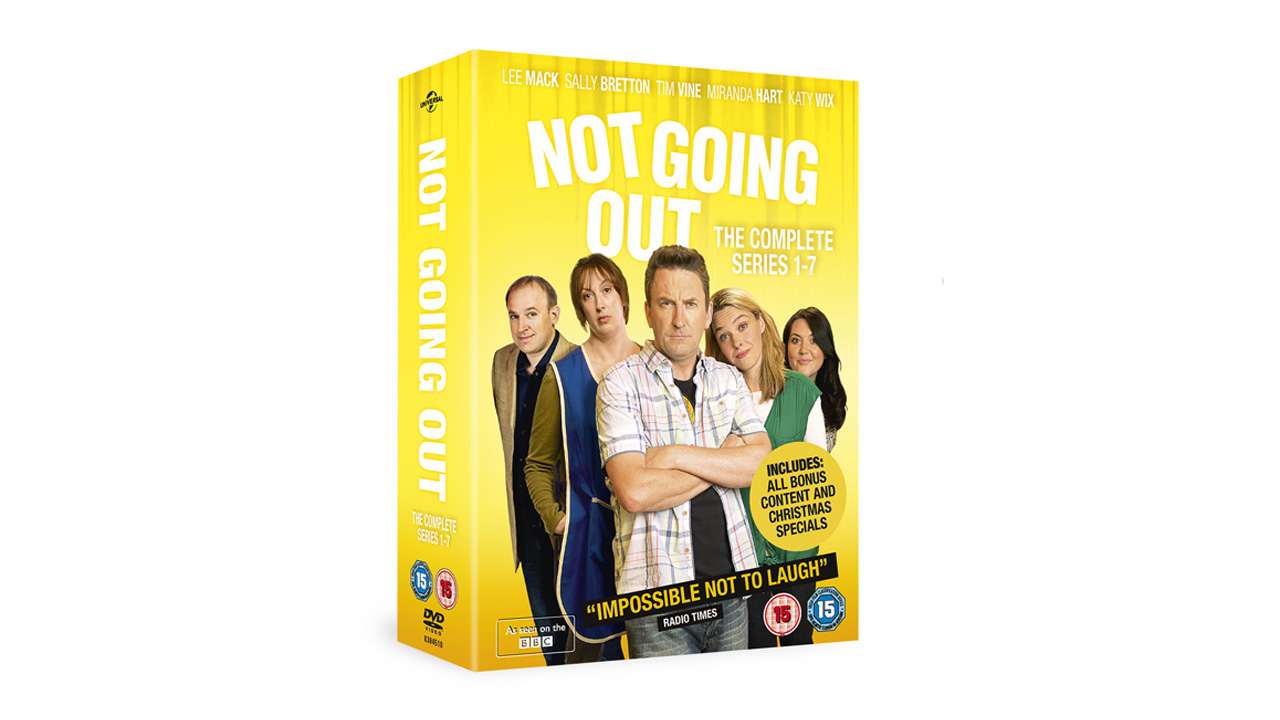 “Stay in and watch it”
The Sunday Times, Culture

For the first time ever, fans will be able to own all 53 episodes, including the very dramatic series 7 finale (no spoilers), of LEE MACK’s multi award-winning show Not Going Out. The show, as well as being hugely popular with critics and audiences, holds the accolade of being the BBC’s longest running sitcom currently on air. Series 1 – 7 of the BBC ONE peak time show will be released as a DVD box set on 1st June, while series 7 will also be released as a standalone DVD, both courtesy of Universal Pictures (UK).

Highlights of series 7 include an emasculated Lee feeling forced to prove his masculinity again… and again, to a more disappointed than usual Lucy; Lee and Lucy making every wrong decision humanly possible in the bid to find the perfect present for a new neighbour; Lee wrestling with Lucy’s desire to have a child with another man; and when Lee joins Daisy to compete on the hit TV show Pointless (yes, really) how could he fail to prove his intellectual prowess to Lucy? The will-they-won’t-they tension reaches unseen new highs in an epic series finale that sees Lucy and Lee in previously uncharted emotional water. Will they, or won’t they… the time has come to finally find out.

LEE MACK has established himself as one of the UK’s most recognisable and celebrated comedy stars. A busy 2014 saw him return as resident team captain on Would I Lie To You? (BBC ONE); host the second series of Duck Quacks Don’t Echo (Sky One); and embark on a national tour with a brand new stand up show, Hit The Road Mack, already a sell-out before it started, the tour was extended twice and saw LEE playing 84 dates including eight shows at London’s iconic Hammersmith Apollo.

NOT GOING OUT SERIES 7

WHAT THE PRESS HAVE SAID ABOUT NOT GOING OUT

“as funny and fresh as ever”
Daily Mail

“What it does, it does brilliantly. Gags are carefully set up, you can see them coming, but when they hit, you laugh. Simple. Of course all of this is made special by Lee Mack, probably the best gag-man on television, and a proper comedian who is funny to his bone marrow.”
Alison Graham, Radio Times

“This is one of the most gag-rich comedies on the box and, as it returns for a new series, the quality of the writing has not waned a jot.”
David Stephenson, Sunday Express

“. . . this sitcom’s philosophy is brilliantly simple: “Didn’t like that joke? Nevermind, here comes another one. And another. And another.”
Ian Hyland, The Daily Mirror

“What it delivers are sharp, uncomplicated laughs, laced with a good-natured smuttiness perfect for Friday nights.”
David Butcher, Radio Times

“The main reason to watch Not Going Out has always been because of its absolutely ingenious one-liners, puns and double entendres…Not Going Out remains a rare thing – a brightly lit British studio sitcom that is actually worth staying in for.”
Sharon Lougher, Metro

“Lee Mack and his co-stars are set to give your jaws another high intensity workout with an episode that packs so many laughs into each minute, the EU should probably slap a health warning on it.”
Jane Simon, The Daily Mirror

“It’s a great finale, which has got us crossing our fingers that the BBC will commission another series…” ★★★★
TV Times

“Lee Mack’s jokes, jibes and general misunderstandings about life in Not Going Out always cracks us up.”
Reveal

“Stay in and watch it”
The Sunday Times, Culture

2. CHRISTENING
Lee’s big mouth has got him and Lucy invited to a Christening Party thrown by new neighbours Toby and Anna, and now they have no time to find the perfect present for the baby who has everything.

3. DONOR
When Lucy decides it’s time to have a baby she’s surprised to find the whole family taking a personal interest in the conception.

4. ANNA
Lucy aspires to be friends with her posh new neighbours, Toby and Anna, but hasn’t reckoned on Lee dragging her back down to earth.

5. POINTLESS
In an attempt to impress Lucy with his intellectual prowess Lee joins Daisy as a contestant on the TV quiz show, Pointless.

6. ALCOHOL
Frank’s drinking becomes a problem and forces Lee and Lucy to reassess the living arrangements in the flat.

7. SURPRISE
No matter what happens, Lucy’s surprise party for her parents’ anniversary must remain a secret or it won’t be a surprise. So why she tells Lee about it is anyone’s guess.

8. PLANE
Flying off on a summer holiday, Lucy and Daisy endure the worst flight of their lives when Lee gets a bad case of the jitters on the plane.

9. LUCY
Lee spends time in the bar with Toby worrying that the woman of his dreams is drifting further away.

10. CHRISTMAS SPECIAL
The will-they-won’t-they tension reaches unseen new highs in this epic series finale for Christmas that sees Lucy and Lee in previously uncharted emotional water. In this action packed episode, Frank drags Lee on a wild night out on the town with disastrous consequences involving a traffic cone, arm wrestling on a zebra crossing and slow dancing together to a Whitney classic. The Police are also interested in a potentially stolen item in Lee’s possession… can our favourite loveable layabout talk his way out of this spectacular mess and still make his most important appointment of the day?