GREG DAVIES, THE BACK OF MY MUM’S HEAD: NEW FOR DVD AND BLU-RAY THIS AUTUMN 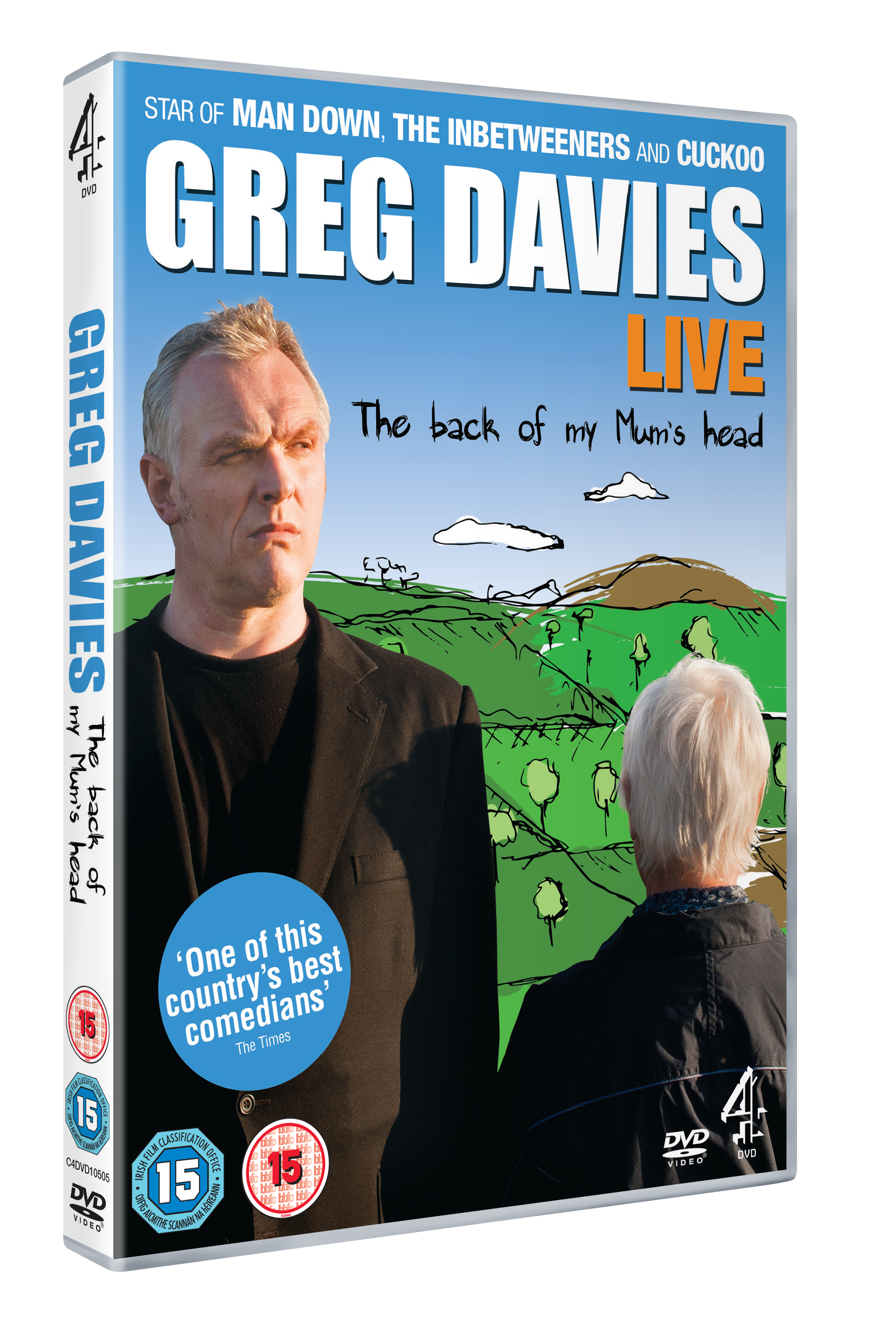 “One of this country’s best comedians”
The Times

It was announced today (Monday 28th October 2013) that 4DVD will bring GREG DAVIES’ (Man Down, Cuckoo and The Inbetweeners) acclaimed sell-out tour The Back of my Mum’s Head to DVD and Blu-ray™ on the 11th November. The tour of the same name received rave reviews and was extended to 94 dates, including multiple sell out nights at London’s Hammersmith Apollo and The South Bank Centre, to meet demand for tickets.

Experience the critically acclaimed comedian at his best, live on stage. Stung by his mother’s suggestion that he is “not normal” GREG puts everyone under the microscope in a petty quest to discover if anyone actually is. The analysis is far from scientific and the conclusions, at best, spurious. To be clear, as an educational tool this show is worthless. It is funny though.

Currently GREG is starring in his brand new Channel 4 hit sitcom Man Down – already a critical success the show debuted last Friday and achieved the highest ratings for the channel that evening. GREG DAVIES first came to prominence as the psychotic Head of Sixth Form, Mr Gilbert, in The Inbetweeners (Channel 4), a role which he reprised in The Inbetweeners film (the highest grossing British comedy film of all time). Last year he starred as Ken in Cuckoo, which was BBC Three’s most watched comedy launch ever and saw GREG nominated for a BAFTA Award alongside STEVE COOGAN, PETER CAPALDI and HUGH BONNEVILLE. GREG’S last DVD, Firing Cheeseballs At A Dog 2011 made the top 10 in the comedy DVD chart and was nominated for Best DVD in the 2012Chortle Awards.

GREG has also hosted and performed on Live at the Apollo (BBC One), headlined Dave’s One Night Stand (Dave), been a regular team captain on two series of Ask Rhod Gilbert (BBC One), hosted Never Mind The Buzzcocks (BBC Two) and appeared on the The Royal Variety Performance 2011 (ITV1). Further TV appearances include Have I Got News for You (BBC One), Would I Lie To You? (BBC ONE), 8 Out Of 10 Cats (Channel 4), Frank Skinner’s Opinionated (BBC Two), Mock The Week (BBC Two), The Graham Norton Show (BBC One) and driving through Nepal alongside RHOD GILBERT in World’s Most Dangerous Roads (BBC Two). As well as the BAFTA nomination, GREG was recently nominated for Best Comedy Breakthrough Artist at the British Comedy Awards and The Times Breakthrough Award at the South Bank Show Awards. GREG was also one third of Edinburgh Comedy Award 2006 and Barry Award 2007 nominated sketch group WE ARE KLANG.
ends

Greg Davies: The Back of my Mum’s Head (cert 15), 4DVD 2013
(Running time approx. 84 minutes. Extras: Audio Commentary with Greg Davies & Ed Gamble; On A Barge with Greg & Marsha – Marsha Shandur interviews Greg; and Behind The Back of My Mum’s Head – Behind the Scenes featurette.)

What the press also said about… The Back of my Mum’s Head:

“A blisteringly funny onslaught of stories, soundscapes and foliage-based songs. Snap up tickets, you won’t regret it”
Time Out

“Uproarious night of anecdotes, told by a real pro, who rather than resting on his TV laurels is cementing his position of one of Britain’s finest storytelling comedians”
Chortle

OTHER PRAISE FOR GREG DAVIES LIVE:
Best of the Year 2010 – “Genuinely one of the funniest shows you’ll see this year”
Time Out ★★★★★

“One of the funniest stand-up comics”
Dominic Maxwell, The Times

“Davies weaves a magnificent web. Fact or fiction, he sells the whole show, frequently leaving you helpless with laughter.”
The Independent ★★★★★

“A hilarious but touching résumé of his life so far … a wonderfully feel good show that demands repeated viewings.”
The Sunday Telegraph ★★★★★

WHAT THE PRESS HAS ALREADY SAID ABOUT MAN DOWN:

“Anyone who enjoys the madcap stand-up routines of Greg Davies will love his new sitcom…it is very funny.”
Joe Clay, The Times

“Peal the bells, crack open the bubbly, do whatever you do to mark unexpectedly good news. Because at last a new British sitcom has landed and it is actually, you know, quite good… mucking about is something Davies is exceptionally good at, deploying the full range of his enormous physicality alongside the excellent comic timing you’d expect from a seasoned stand-up.”
Ben Dowell, The Radio Times

“At heart, it’s a brilliant example of a mainstream sitcom… but with a twist and heart of its own. Channel 4 – and Greg Davies – deserve to have a monster hit on their hands”
Steve Bennett, Chortle

“This is big, bold comedy that really packs in the laughs”
TV Times

“If you were a fan of Greg Davies as the terrifying Mr Gilbert in The Inbetweeners, you’ll love this new sitcom he’s written… his dad (a brilliant Rik Mayall) bullies him, his girlfriend is sick of him and his friends are crazy. It’s a promising debut”
The Sun

“It takes childish glee in its absurdities, which include Rik Mayall as his certifiable father, and delivers some nice sight gags”
The Observer

“Greg Davies brings his gift for the deranged to a sitcom so loaded with childish eccentricity, it practically bludgeons us into laughter”
David Butcher, Radio Times

“Thanks to Greg Davies’s towering energetic idiocy, Man Down offers reliable silliness that’s absolutely perfect for a Friday night – and it’s the ideal vehicle for Davies to exploit his background in both teaching and stand-up. But he doesn’t save all the best gags for himself and the support from Roisin Conaty and Mike Wozniak as his best mates Jo and Brian are outstanding. The casting of Rik Mayall as Dan’s father is inspired too”
Jane Simon, Daily Mirror